Competing for the same space. 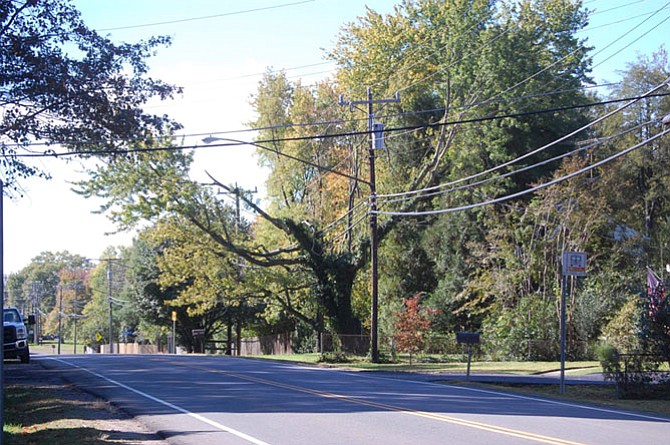 Fort Hunt Road south of the Beltway hosts multiple severely-pruned trees. This one is located between Wellington Road and Collingwood Road.

Mount Vernon — “I saw Dominion Energy’s contractor, Asplundh, while they were ‘trimming’ the trees on Parkers Lane,” Williamsburg Manor resident Greg Crider recalled recently. “I’ve seen the company do reasonable trimming in the past, but they really butchered the trees this time.” 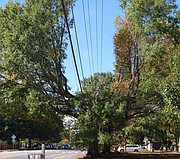 This severely pruned tree is on Sherwood Hall Lane near the library. VDOT arborist Robert Burris said it was stable in normal weather conditions and absent decay.

becomes Parker’s Lane close to the Justice-Snowden/Bock Farm in Mount Vernon. It’s been pruned so severely, and in a seemingly unnatural manner, that it appears to be raising its limbs in search of salvation from the tree gods. Mimi Friedman of River/Briary Farms, offered her reaction to the same tree: “We gasp when we pass the one across from the farm on Parkers.”

Crider and Friedman join many others on one side of a multisided debate/argument about how power suppliers keep tree limbs from interfering with their overhead lines. The target of the residents’ ire, at least in the Mount Vernon area, is Dominion Energy and its tree-trimming contractors. Dominion’s Jay Griles, manager of the company’s Distribution Forestry Division, and company spokesman Chuck Penn explained Dominion’s challenges. 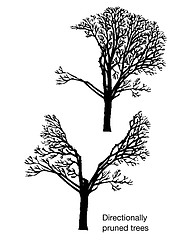 These drawings from Penn State University illustrate the accepted practice of “directional pruning.”

adversely impact our ability to provide safe and reliable electricity,” Griles said. “It is important to balance keeping the lines clear with the impact we have on our customers and their property.”

At the heart of the tree-trimming issue is an industry-standard practice termed “directional pruning.” [See drawings illustrating the technique from a brochure published by Penn State University’s Extension Service titled “Pruning for Utility Line Clearance.”] This pruning method removes branches growing toward power lines in favor of those growing away.

While this practice is endorsed by the Tree Care Industry Association and the International Society of Arboriculture, another widely observed trimming practice – topping – is not. Some private tree trimmers favor the operation, but certified arborists, including Dominion’s, abhor it. The technique cuts off a tree’s top and major lateral limbs, as if trimming a hedge or boxwood. According to TreesAreGood.org, an educational website sponsored by the ISA, “Topping is perhaps the most harmful tree pruning practice known.” The cuts foster wood decay and thus reduces the tree’s structural integrity and life span.

Alternatives to directional pruning are limited, and one is often useless in the well-established neighborhoods of Mount Vernon: Don’t plant unapproved trees under overhead power lines. However, this would apply to current homeowners wishing to replace a failed tree with a new one, and Dominion requests them contact the company regarding approved plantings under power lines. [See https://www.dominionenergy.com/home-and-small-business/manage-service/trees-plants-and-power-lines].Virginia Tech’s Cooperative Extension also offers advice on selecting new trees at http://urbanforestry.frec.vt.edu/STREETS/documents/VTextutility.pdf.

Tree removal is an option for existing, severely-pruned trees or for those scheduled for radical trimming. The first instance can include trees pruned in the past, or when residents come home from work and see their newly mangled tree. “We handle these on a case by case basis because each tree and location have several variables,” Dominion’s Penn said. Those matters can include tree size, proximity to roads and buildings, accessibility — climbing a utility pole versus bucket truck access — and cost to Dominion Energy of removing the tree. If the tree is within 10 feet of a power line, Dominion will seek a means of partnering with the resident to achieve removal. If a third-party contractor is needed, Dominion will prepare the tree by removing any limbs within 10 feet of the line or temporarily de-energize it for safe removal.

A homeowner’s awareness of planned trimming currently is an iffy proposition because Dominion only notifies residents of scheduled pruning by adding a note on their monthly electric bill. However, if residents see the note they should contact Dominion using the above link or by calling 1-866-366-4357. Ask to speak with the company’s Forestry Coordinator and ask for details.

In some locations, Dominion has partnered with cities to remove and replant the right trees. “We work with the municipalities,” Dominion’s Griles said, “on the removal and they work with the homeowners’ association on what to replant.”

Cathy Ledec, the tree commissioner in Fairfax County’s Mount Vernon district, noted Dominion’s help in the development where she lives. The company was agreeable about working with the homeowners’ association, paid for the removal of problem trees and approved a replanting list. “It’s in the interest of Dominion to remove problem trees,” Ledec said, “otherwise they have to come by every two or three years to trim the trees.”

Mount Vernon resident N. E. Hamilton has shared a bit of Ledec’s experience. “There are plenty of mangled trees over here in Mount Vernon Hills,” he said. “My neighbor’s mangled tree hangs way over the street and threatens my vehicle when it’s parked in my auxiliary parking spot. I inquired and Dominion Power told me that the owner needs to contact them to have it assessed for removal.”

Jim McGlone, an urban forest conservationist in the Virginia Department of Forestry, agrees there are few alternatives to pruning beyond removal. “The power industry has developed growth regulating hormones for trees,” McGlone said, “and they slow down the extension of new shoots and reduces the pruning cycle. But power companies need the legal authority to use this compound, plus it’s more expensive than pruning.”

McGlone, also a member of the Fairfax County Tree Commission, seconds the statement by Dominion’s Griles about trees and power lines competing for the same space. “This is one of the constraints that urban foresters deal with all the time,” McGlone said. “Unfortunately, there is no easy solution to creating extra space except undergrounding the lines.”

In McGlone’s view, Dominion is, in the most part, “using arboriculturally appropriate pruning practices.” He also added a bottom-line assessment: “One of things that is important to keep in mind is that trimming those trees is a deadweight cost to the utility. They would rather not have to do that. The fact that they are spending money to do it is because it’s important to their business practice — provide electricity to their customers.”

Keith Cline, director of Fairfax County’s Urban Forestry Management Division, acknowledged the hard choices in tree vs. power line conflicts. “There’s no easy solution. Dominion must prune those trees too close to the lines because of potential power loss, but homeowners want healthy and pretty trees.” Cline also said the Fairfax County Code, Chapter 46 (Health or Safety Menaces), authorizes the county’s removal of a tree that is a safety hazard. Cline echoed Dominion’s stance on removal: “If drastic pruning is required, Dominion can work with the homeowner to remove the tree and replace it with ‘the right tree in the right place’ that will not interfere in the lines.”

Last, Cathy Ledec has been disappointed in Dominion’s use of notes in monthly bills to notify customers of planned tree-trimming operations. “Like many, I no longer receive a paper copy of the bill,” she said, “and the bills for my homeowner's association’s electricity usage go to our management company, so we wouldn’t see those either. It seems that we have to find a better way to communicate the upcoming tree trimming schedule.”

Ledec offered two ideas on improving trimming notifications, First, Dominion could use an online approach similar to that of Virginia’s Department of Transportation. At VDOT’s website is a map showing scheduled paving activities, an excellent tool for homeowners: http://www.virginiadot.org/projects/northern_virginia/northern_virginia_paving_program.asp

Secondly, and, speaking as the chair of the Environment and Recreation Committee of the Mount Vernon Council of Citizens’ Association, Ledec offered to use MVCCA’s communications capabilities to publicize scheduled trimming. Dominion’s Chuck Penn agreed to examine the offer, as well as investigate using social media and the online Nextdoor.com listserve in the Mount Vernon area.

There are three other major players in the local overhead utility/tree conflict – Verizon’s landline telephone and FIOS services, Cox Communications cable TV and telephone and VDOT.

Shown a photo of a tree enveloping non-power, overhead lines on Sherwood Hall Lane, Verizon spokesman John Johnson responded: “The tree and its maintenance are the landowner's responsibility. We would trim it only if we needed to do so in order to perform work on the lines.”

Emma Inman, Cox’s director of public affairs in Virginia, offered the following: “We generally rely on the pole owner, such as Dominion, to address the trees or any associated real estate as they own the easement.” However, photos in the Mount Vernon area of trimmed trees near overhead utility lines show Dominion’s power line pruning, but often there is no accompanying trimming around Cox and Verizon lines.

Multiple images of severely pruned trees were sent to VDOT representative Ellen Kamilakis, including the trees on Sherwood Hall Lane and at the Collingwood/Parker’s corner. “A lot of these trees are ours because they are in the right-of-way, which we own,” Kamilakis said, “so they will be our responsibility. The image you sent me of the tree on Sherwood Hall ultimately could become a VDOT issue because it’s our tree.” Kamilakis added that if a pruned tree in a VDOT right of way posed a safety hazard, VDOT could pay for its removal.

Kamilakis asked VDOT arborist Robert Burris to inspect the Sherwood Hall Lane tree, and afterward Burris offered his assessment: “The tree has an atypical growth habit because of the directional utility pruning, but structurally it is OK under normal weather conditions and in the absence of any significant decay. After the tree was initially pruned years ago, it began to add wood as it grew to compensate for the effects of the pruning and to support its subsequent atypical growth habit.”

Dominion is undergrounding its overhead electrical lines in areas with a history of outages arising from tree problems. However, the company has no plans for widespread undergrounding.