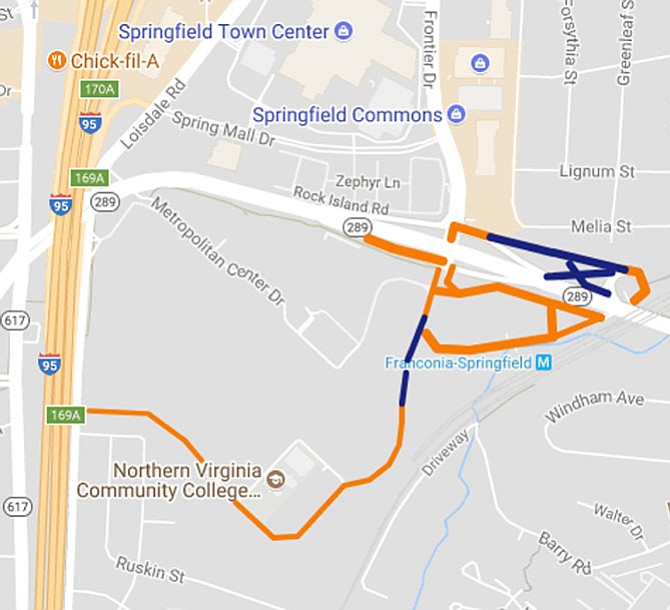 As shown on the map of the plan, there will be two ways to access the Metro station.

Springfield — If there was a musician strumming out tunes at the Springfield-Franconia Metro Station, Bob Dylan’s “Times They are A Changin’,” would be the song of choice, indicative of the changes this area in southeast Fairfax County has experienced lately, capped off with the proposed extension of Frontier

From Frontier Drive looking south, the road will continue past the station.

Drive all the way through to Loisdale Road. The combination of transportation assets and commercial opportunities built in the last few years enhance the attraction to this change.

“The Metro station and interstate access makes it look good,” said Supervisor Jeff McKay (D-Lee), who has been in the supervisor’s office for the mixing bowl project, the mall redevelopment, express lanes, and now the planned Transportation Security Administration (TSA) relocation to land next to the Metro Station.

Mark Heinitz, a resident of nearby Monticello Woods, agreed. “It’s a direct impact to our community, we think central Springfield has great infrastructure,” he said.

Heinitz was among a few homeowners in attendance at the first Frontier Drive Extension public information meeting on Dec. 14, looking over the initial plans and hearing the description from the

At this stage in the project, there are no predictions of construction impacts at the station.

Virginia Department of Transportation (VDOT) engineers. “It’s really about improving access and increasing capacity,” said VDOT engineer Andrew Beecher. “It will enhance the circulation in the Springfield area,” he said.

UNDER THE PLAN, Frontier Drive will continue in a southern direction, past the Metro Station, joining with Springfield Center Drive in a semi-remote area south of the Government Services Administration (GSA) site, and continue west to link with Loisdale Road, just north of Loisdale Estates community. Construction on the $116 million project will begin in 2022 and end in 2024 or 2025. It’s early in the project process, so the timeframe for completion is not finalized yet, but the environmental assessment will be completed in May 2018, officials said.

A voice from the audience mentioned the impact when the TSA construction starts and McKay spoke up. “It’s already under construction,” he said of the site preparation currently underway. “We start the foundation next week,” said Kenneth Simmons, vice president of development at Boston Properties.

Robert Morris, an engineering consultant, worked on the Fairfax County Parkway extension from

Rolling Road to Newington as a Federal Highways engineer, so he is familiar with the transportation needs in this area. “There are many multimodal improvements, including on-road bike paths and a separate multi-modal trail,” Morris said.

Tom Sachs has lived in the area since 1963 and is now on the Lee District land use committee. He was looking at the plans and the braided ramps planned that will ease the flow of pedestrians and vehicles, particularly on the Franconia-Springfield Parkway overpass near the railroad tracks. Although Sachs lives in Manchester Lakes a few miles away, his attendance was semi-official in nature. “I wanted to make sure it’s not something outrageous,” he said. The arrival of the TSA and a 625,000 square foot office complex is “going to help develop the rest of the area,” he said. The plan for access from the parkway to the station over by the tracks will be changed too, eliminating the long walk across the ramp lane, down to the light, and back under the parkway to the station.

VDOT will hold several public information meetings before any ground is broken on the project. Meeting comments can be sent to meetingcomments@vdot.virginia.gov and for more information, go to www.virginiadot.org/projects.