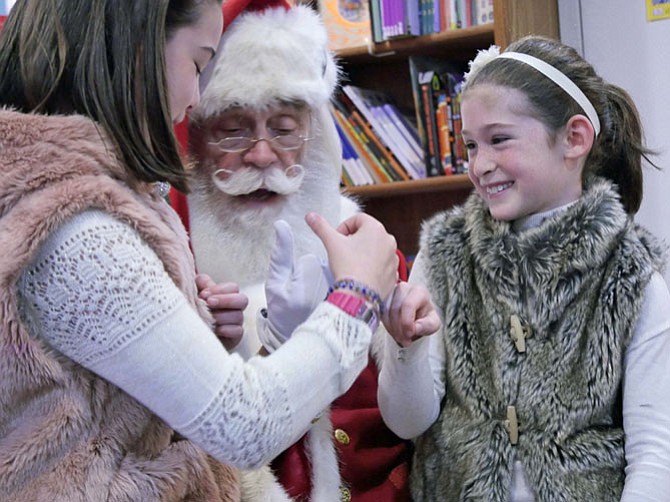 Cassie and Blaine Page hook pinkie fingers with Santa and promise never ever ever to fight with each other, at least until after Christmas. Photo by Shirley Ruhe. 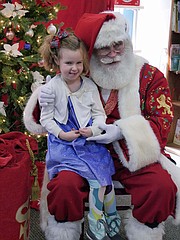 Santa Claus tells Erin Nally that he can tell she loses things: "I see you lost your tooth." 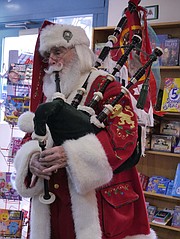 Santa has had a request for some awful noise so he picks up his bagpipe and plays "We Wish You A Merry Christmas."

Eerie notes of a bagpipe and a deep booming Ho Ho Ho announced the arrival of Santa Claus at Hooray for Books! on Sunday, Dec. 17. Children signed up for picture slots with Santa by purchasing a gift certificate that will be used to buy books, toys and games for the children at the Alexandria Domestic Violence Program's holiday party. Although the five-minute slots are scheduled for three hours, the slots are sold out quickly every year.

Santa started making his visits this year on Nov. 17 when he and Mrs. Claus lit the Washingtonian Christmas tree as they do every year — then to the Junior League, the Union Street Public House, Meals on Wheels and the Scottish Christmas Walk. Later today he heads to Chadwicks. He said, "Mrs. Claus (the elves call her Mrs. C) and I have a little program with singing and stories and puppets from 5-45 minutes depending on the desires of the mom and kids."

Santa says he and the elves have been constructing toys for the last 800 years. He often brings Q.C. Elf with him. Q.C. stands for quality control. When Santa picks out the toys they have already been reviewed by Q.C. "There is such a rush to produce toys at Christmas and children decide at the last minute so it is inevitable that some flaws will slip through." He says earlier this week Q.C. found a block that had B,C,D and then A. They were out of order and the A was lazy on its side. "You can't give a child a toy like that."

He explains that Q.C. is a little rebellious. Elves aren't supposed to move except at night but Q.C. misbehaves and has to be put in timeout in a little house that Santa brings with him.

Santa adjusts his wire glasses and tosses back his white-trimmed hat. He says that kids usually ask for the most popular toys, and it changes every year. This year it is fingerlings. "But Q.C. and Santa misestimated the demand. So we put all the names of the good ones in a lottery. But there are very few fingerlings so I guess we should call it a ‘littery’."

"Anyone want a picture?" The first in line is 6-year-old Erin Nally who sits on Santa's lap and Santa tells Erin he knows she keeps losing things. "I can tell because she lost her tooth." Erin shares with Santa that she wants a Cabbage Patch Doll for Christmas. Her mother received a Cabbage Patch doll as a child, and the doll's name was Erin. "You named your daughter after a Cabbage Patch doll?" Santa asks. Santa asks if Erin has an elf. "Yes, a good elf and she likes marshmallows. I give them to her in a marshmallow cup."

Next in line are 11-year-old Cassie and her 9-year-old sister Blaine Page who greet Santa with great enthusiasm. They have been to see Santa many years in the past. Santa asks if they have ever had a tussle. Their mother shakes her head no, "I don't think so."

"No," her sister responds with a giggle. Santa continues, "to never, ever, ever fight with my sister or at least until Christmas. On the 26th you're free to fight."

Santa asks if they have an elf at home. Yes, Twinkle and Flash. "You'd be surprised how many are named Elfie," Santa comments.

Two more sisters are waiting to see Santa. The older sister promptly climbs on Santa's lap but her baby sister clutches her stuffed monkey firmly and buries her face in her father's shoulder. After several unsuccessful minutes of coaxing, Santa has an idea. "Why don't you sit with your dad in Santa's seat? I'm leaving for a few minutes. I have something to do." Santa circles around the room and appears behind the family. The photographer snaps quickly and the picture with Santa is successful.

Santa takes a quick break. "I have a request for some awful noise." He picks up his bagpipe and plays "I Wish You a Merry Christmas."