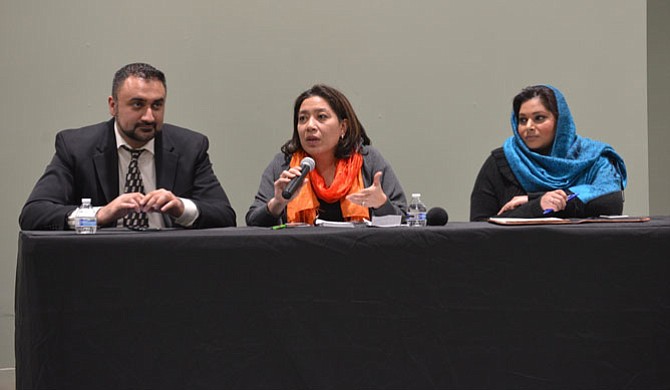 Hodan Abdi and her mother Anab Ali smiled for the camera, but once the photo was snapped, Hodan’s tears returned. Her fiancé, due to arrive for his move to the United States and his wedding to Hodan, had been denied boarding on the flight.

Attorney Nick Katz, Senior Manager, Legal Program with CASA, left, talks with one of the forum attendees after the main presentations and the Q&A session. “Taking action is important, it will make a difference,” said Katz

In the wake of President Trump’s executive orders cancelling or suspending visas and banning – at least temporarily - entry into United States by travellers from seven Muslim-majority nations, leaders at the All Dulles Area Muslim Society (ADAMS) quickly organized a legal forum to inform people of their rights under the new regulations.

Four immigration lawyers formed a panel, taking turns trying to explain the details of the Orders, “although that’s a bit difficult” admitted attorney Hassan M. Ahmad, the HMA Law Firm, “because things seem to be changing, getting tweaked, minute-by-minute. But we want to empower you with as much information as we have.” Ahmad was joined on the dais by Nick Katz, Senior Manager, Legal Program from CASA, Ofelia Calderon, Partner, Calderon Seguin PLC, and Pooja Bhagat, Bhagat Law Firm.

“There are two Executive Orders,” explained Ahmad. “Basically, one looks outward, looking to keep potential threats from entering the country. The second looks inward, at the people already in the United States.”

In Ahmad’s opinion, the function of the former – “Protecting the Nation from Foreign Terrorist Entry into the United States” - is already addressed under US laws. “What’s been added is that people entering the US must ‘support the Constitution’ – something so vague and hard to quantify in any way.” The attorney said it seemed more like a “different way to catch you.”

As disruptive and traumatic as the “outward-looking” Order may be to some, Ahmad expressed even more concern regarding “Executive Order: Border Security and Immigration Enforcement Improvement” signed into effect on Jan. 25.

IN THE PAST, Immigrations Enforcement agencies targeted for deportation undocumented immigrants who had committed a serious crime before “moving down the list.” Now, according to Ahmad’s reading of the Order (with which the other panellists agreed) “everyone is Priority One.” In addition, there are penalties and punishments for persons who “facilitate” undocumented immigrants in remaining in the country. The attorneys noted that this stipulation was largely aimed at so-called “Sanctuary Cities,” but that the way it was written, said Ahmad, “a lawyer could be considered a facilitator for helping their client.”

After their brief presentations, the panel offered to take questions from the audience. There was no shortage of takers on that offer.

“We are Green Card holders and have been here 10 years. Can we go home for my brother’s wedding in Yemen?” was the first inquiry.

“I would not go back right now if I were you,” answered Ofelia Calderon. “Travel for Green Card holders is just not advisable. Not until we see where this goes after the first 90 days.”

“I am here legally from one of the banned countries. I have been working through the process to get my permanent status for more than 7 years. What happens to me?” asked another attendee.

“I’m sorry, but your case is on hold,” responded Calderon.

Anab Ali spoke for herself and her daughter Hodan Abdi beside her, telling the panel that Hodan’s fiancé had been scheduled to arrive at Dulles Airport just a few days earlier. At the last minute they received word that he had been denied boarding on an Emirates flight from Dubai. “What do we do? This is terrible,” said Ali. “Yes, he is a Somali national because of his parents, but he was born and raised in Dubai. He has never even been to Somalia.”

The plight of Anab, Hodan and Hodan’s fiancé met with the sympathy of the attorneys, but no remedy. An attorney that Ali and her daughter met at Dulles when they joined the protests there over the weekend, volunteered to help and has been in contact with the bridegroom, but so far no way around the ban has been discovered.

THE QUESTIONS kept coming, and for the most part, the answers were disappointing to the person who asked.

Before wrapping up the Q&A session and moving on to one-on-one time with the lawyers, the four offered some general advice for those traveling, and those staying within the borders.

Finally, the attorneys advised that people stay calm, stay hopeful and stay involved. Calderon told them how 1300 attorneys volunteered to attend the protests at Dulles and to assist those denied entry or returned to their port of origin. “Remember, you are not alone. There are lots of people working to make this right.”