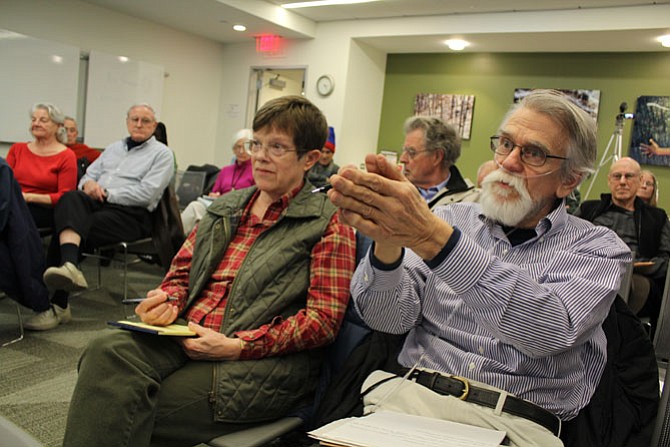 Reston neighbors Cathy Waters, left, and Joe Toussaint, right, vent their frustration that the Reston Association has control of the publication of the independent investigation’s report. Photo by Fallon Forbush. 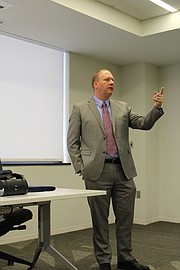 Eric Carr, chair of the Reston Association Tetra Review Committee, explains the agenda to the nearly 30 participants who attended at the beginning of the community input session.

Members of the Reston community vented their frustrations and concerns about an independent review of the Reston Association that is underway during a community input session at RA headquarters on Thursday, Feb. 9.

The review is investigating the RA’s processes during the referendum, purchase and renovation of its Lake House property, which went over budget and has yielded revenue shortfalls ever since it was purchased in July 2015 for $2.6 million.

The RA board of directors hired StoneTurn Group, LLC on Thursday, Jan. 26, to complete the investigation by Tuesday, Feb. 28, for up to $45,000.

Three individuals who are involved in the review were present to collect input: Deirdre Flaherty, partner and co-founder of the StoneTurn Group; Mike Sanio, Reston Association Board vice president and at-large director; and Eric Carr, chair of the RA’s Tetra (Lake House) Review Committee.

Carr’s committee, which was formed in July 2016, comprises three RA members and the four members of the RA Board Governance Committee, including Sanio. It was tasked with recommending firms to the RA Board to carry out the investigation. Sanio and Carr are now intermediaries for StoneTurn Group during their investigation.

Flaherty was using the public input to inform the work plan of her company’s investigation, which had not been completed at the time of the meeting — 19 days before it was due.

“I don’t know what we’re going to do yet,” Flaherty said during the meeting. “That’s what we’re in the process of figuring out and exactly how we’re going to look at this. We certainly understand from the RFP documents the general areas of your concern, but this is your opportunity to speak and be heard as we go through this process.”

While the intention of the investigation is to prevent the RA from ever mishandling a capital project in the same manner again, most of the members in attendance emphasized their interest in learning who was responsible for the misuse of RA money so that they could be held responsible.

When Ed Abbott, coordinator of the Reston Recall group, asked Flaherty if her report would identify individual wrongdoing or misconduct, she replied by saying, “The scope of our work isn’t to do that right now.”

Flaherty also said she does not know whether members of the board of directors would disclose any pertinent information from executive sessions that were not open to the public.

“I’m a little astonished, Mike [Sanio], that you made the comment earlier that you want to know what happened because as far as I can figure, you were on the board that was privy to all those executive sessions none of us were at,” Tammi Petrine, co-chair of the Reston 20/20 Committee, said during the meeting. “So how you don’t know what happened is stunning to me.”

AT THE BEGINNING of the meeting, Sanio said: “I served on the board pretty much over the whole period where this transpired. I was very much involved. I am very interested in knowing exactly what had occurred and what it is that we can put in place in order to ensure that this doesn’t happen again in the future. I very much advocated for an independent review. I’m very, very pleased that StoneTurn has agreed to work with us to do this. I’m pleased that they’re working against a very, very tight timeline.”

Multiple RA members also demanded that StoneTurn’s report be made public without being altered by the RA.

“Of course the final report has to be available to the membership,” Dennis Hays, at-large director of the Reston Citizens Association, said during the meeting. “We’re the ones paying for your fee. We’re the ones who elect our representatives … We do expect an independent review that is published widely at the end.”

StoneTurn will do the work and Sanio and Carr will receive the draft report to review and present to the RA Board, according to Sanio.

Sanio plans to recommend to publish it unchanged.

“My intention is to have the Board make that report from StoneTurn available to the public without any edits, as prepared by StoneTurn,” Sanio said. “The Board can ultimately decide what it wants to do, but I can tell you right now as a member of the Board and the point of contact on this, I’m recommending that this be made available to the public once we’ve received an acceptable copy.”

Carr will not advocate for anything less either.

“I’m not editing or altering anything,” Carr said. “In my mind, that would be unacceptable.”

Sanio chided the audience for their heated charges and comments implying otherwise.

“We have been encouraged to have the consultant reach out to anyone that they believe is appropriate in order to get the answers that they need and up until now, I have received no resistance in going forward,” he said. “And let me speak personally, I’ve heard lots of accusations, I’ve read accusations, some of them unfounded. And I think for those that serve on the board as volunteers, you put those individuals that commit untold hours in your service into a very, very difficult position and I would urge you to reflect on that.”

Terry Maynard, co-chair of the Reston 20/20 Committee, fired back.

“Your board got us where we are,” Maynard said. “ So, please don’t ask us for our sympathy and respect when you’ve earned what you’ve got.”

Audience members also alleged that the contract negotiations between the RA and the first consultant the Tetra Review Committee recommended, MediaWorld Ventures, was not treated fairly because its draft contract was substantially more punitive and restrictive.

“The contracts were essentially the same,” Sanio said. “And I had asked that question of our attorney because I knew that this would be an issue and it would be just frankly inappropriate if we were negotiating with different terms and conditions with MediaWorld than we were with StoneTurn.”

THE TETRA REVIEW COMMITTEE made its initial recommendation back in September 2016. Even though months’ worth of negotiations with MediaWorld fell through in January, the RA is committed to keeping its original timeline of having the investigation complete by the end of the month.

This worried some members of the audience, who voiced concern that it would be rushed or go over the $45,000 budget. Even Carr is worried.

“I am nervous about the scope and schedule,” Carr said. “It’s very quick.”

If the review does not answer the member’s concerns, the public outcry over the Lake House will not be over.”

“I’m not counting on the board of directors to make any changes on their own initiative,” Joe Toussaint, RA member, said during the meeting. “They’re going to have to be told and it’s not necessarily going to come from [StoneTurn]. It’s going to come from the community at large.”