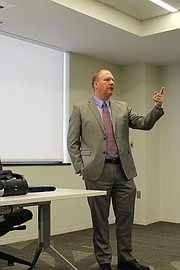 Eric Carr, chair of the Reston Association Tetra Review Committee, participated in a community input session at RA headquarters on Thursday, Feb. 9, to talk to RA members about the investigation, which StoneTurn Group was conducting. Multiple RA members demanded that the report be made public without being altered by the RA. According to Carr, this was done.

The 30-page report examined the RA’s processes during the referendum, purchase and renovation of its Lake House property, which went over budget and has yielded revenue shortfalls ever since it was purchased in July 2015 for $2.6 million.

The RA Board of Directors hired StoneTurn Group, LLC on Thursday, Jan. 26, to complete the investigation by Tuesday, Feb. 28, for up to $45,000.

While the intention of the investigation was to scrutinize the organization’s processes to prevent the RA from ever mishandling a capital project in the same manner again, many RA members demanded StoneTurn identify specific individuals responsible for the misuse of RA money so they could be held responsible.

“The RA Board and staff will still need time to read the report after it’s posted before anyone will be able to comment on it,” said Mike Leone, RA spokesperson.

Eric Carr, chair of the RA’s Tetra (Lake House) Review Committee and intermediary between the RA and StoneTurn during the investigation, said the report reveals the guilty parties.

“If you look at the sum total of the findings, there’s a failure of process and a failure to follow procedures, primarily by the staff throughout this fiasco,” Carr said. “The staff is to blame.”

The report cites a significant lack of transparency due to excessive use of meetings in executive session throughout the process and a fundamental lack of procedures for capital projects.

“In my own words, they didn’t know what they were getting into to properly scope the job requirements of a capital project,” Carr said.

Since public outcry over the Lake House, the RA hired Garrett Skinner as director of its new Capital Improvement Planning and Projects Department. He began work on Monday, Jan. 9.

The new department, which includes three current RA employees, is responsible for the oversight of the association’s capital projects.

Carr is running for the at-large seat on the RA Board during the spring election this month and hopes to bring further changes to how board members interact with staff members if he is elected.

Small projects could be handled without processes, but now with Metro development, things have become more complicated and more expensive, he said.

“There also has to be some sort of healing,” he said.

The board election will bring changes to the at-large, North Point District, Hunters Woods/Dogwood District seats and the Apartment Owners’ Representative, which should help with that healing, he said.

“I don’t know if that means we need to have changes in the staff, but we have to show that we mean that business in the future is going to be different than business in the past, and I think that’s the next step that has to happen,” he said.

The RA Board of Directors initially scheduled to review the report and hear comments at a special public meeting on Tuesday, March 14. Due to inclement weather, the meeting has been rescheduled to Monday, March 20, at 6:30 p.m. at RA headquarters