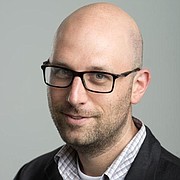 Washington Post sports columnist Dan Steinberg will be the guest speaker at the Feb. 21 meeting of the Alexandria Sportsman’s Club.

Founder of the DC Sports Bog, Steinberg started working at The Post as a stringer and part-time news aide in the summer of 2001. He eventually became a full-time staff writer, covered the Maryland football team and George Mason and George Washington basketball teams and traveled to the 2006 Winter Olympics, where he began blogging for the first time.

That summer, he became The Post's first full-time writer who wrote exclusively for the web. Over the last 10 years, he's written thousands of items for the D.C. Sports Bog, while also covering a Super Bowl, several NCAA tournaments, and the NBA and NHL playoffs. He became a Post columnist in late 2014 but continues to contribute to the D.C. Sports Bog.

The upcoming meeting will be the last regular ASC meeting prior to the organization’s annual banquet, which recognizes high school Athletes of the Year from across the city. This year’s banquet and presentation of scholarship awards will be held Tuesday, May 30, at the Westin Alexandria Hotel.

The Feb. 21 meeting will be held at the Old Dominion Boat Club, 1 King Street, in Old Town. Social time begins at 6:30 p.m. with the formal program and presentation of Athlete of the Month awards commencing at 7:15 p.m. The meeting is free to attend and open to all. Light refreshments will be served.