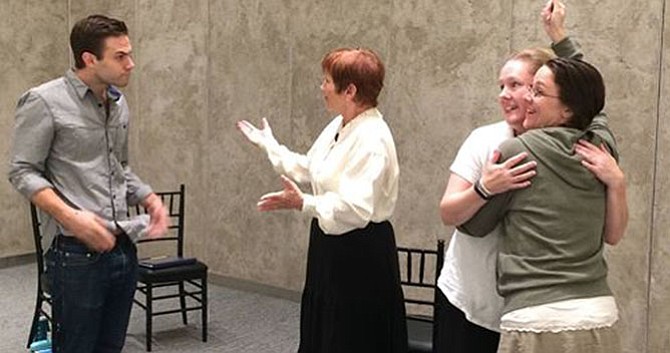 Alexandria — The new Pipeline Playwrights group in Alexandria is kicking off its 2017 inaugural series with a reading of its first play, "A Very Present Presence," on Monday, Feb. 27, at 7:30 p.m. at MetroStage in Alexandria. It will be a reading of the whole play with a time for discussion with the playwright, Ann Timmons, and actors with a reception afterwards.

This comedy opens as Alice's mid-life crisis is interrupted by a visitation from her long-dead great-aunt, who takes her on a journey through time. Alice learns that her problems spring from sources deeper than she imagined.

Writer and Director Ann Timmons said she wanted to see this play onstage, fully produced. "I think the events of the summer/fall have galvanized women and revived awareness of gender inequality that still exists," she said. "Cultural expectations work in tandem with political movements and the policies they produce to keep women 'in their place.' And somehow that message had gotten lost in the shuffle of our recent small victories."

She said she hopes people go away with an appreciation of family history, of cultural forces that shaped the lives of their parents and grandparents, and that have had an impact on their lives. "I also want audiences to see that people can change, and they can change the circumstances in which they live. It may not always be easy, but it is possible. Passively accepting 'one’s lot in life' is not the only (or best) option," she said. "I also want to treat a fairly weighty subject with humor and empathy."

Caren Anton plays the role of Nell, the "presence" referenced in the play's title. "Without revealing too much, I will say that I am the great-aunt of Alice, whose journey the play depicts. I have come to visit her from a time in the past in order to help her through a personal crisis in the present," she said.

As far as challenges, she said: "There's an inherent challenge in presenting a play in a staged-reading format. You count on the audience to 'fill in the blanks.' And in this play, especially, there are extra challenges because it plays with the concept of time. You want to be sure the audience is not confused."

Katherine Stanford plays the role of Alice, a strong but soft-hearted, over-achieving but flawed woman who has a lot to learn, and does in the course of the play. "We first see her vacating her life for a few days to rest and reflect, but she ends up taking a leap of faith into her new future by exploring her family and feminist history, and ultimately learning to live in the present," she said.

Her biggest challenge was bringing compassion to the character of Alice, she said. "The audience needs to identify with her right away so they can join in her journey of self-discovery. But she yells a lot in the first few scenes — and it’s a fine line to walk between hilarity and annoyance."