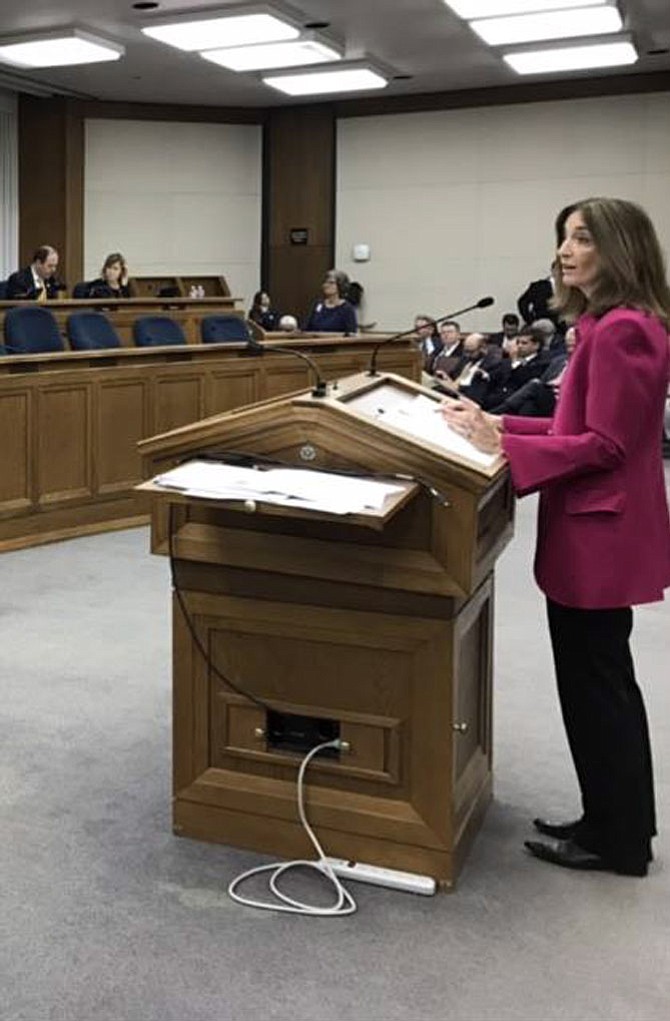 Right, Del. Eileen Filler-Corn (D-41) speaks at the Virginia General Assembly about HB 2404, which would create an advisory council to study and raise awareness of PANDAS and PANS. Photo contributed

Jessica Gavin and a team of parents visited Richmond in support of Eileen Filler-Corn’s HB 2404, which would create an advisory council to study and raise awareness of PANDAS and PANS.

Del. Eileen Filler-Corn’s HB 2404 passed the House of Delegates on Feb. 7. The senate passed it with amendments on Feb. 20. One day later, the House agreed to the amendments and adopted it by a vote of 93 to 4.

Overnight, Alexandria resident Carol Quick’s 9-year-old son developed an eating disorder — an obsessive-compulsive disorder, anxiety. “He started displaying very unusual and alarming symptoms, when he was 9,” Quick said. “Enough so that we sought help from the pediatrician, had to go to emergency room for dehydration.” At the time, Quick’s pediatrician dismissed the symptoms as simply anxiety.

After waiting months for an appointment with a specialist, the Quicks’ first PANDAS diagnosis was confirmed. Their son was barely able to leave the house to attend school, he was so underweight due to self-imposed restricted eating.

“For an 11-year-old to have such severe, despondent, depression, he didn’t understand.” Quick said. “He knew something was wrong, but didn’t know why. He was sad, embarrassed. Just by not wanting to be at school, feeling so scared when he was there.”

In PANDAS, the body produces antibodies in reaction to the strep bacteria, some of which target the brain, which can result in inflammation, OCD tics and other neuropsychiatric symptoms.

Diagnosing PANDAS is clinical, rather than laboratory-based, and many physicians don’t have a protocol for treating it, according to the National Institute of Mental Health. The PANDAS Network information and advocacy nonprofit estimates PANDAS and the related Pediatric Acute-onset Neuropsychiatric Syndrome (PANS) affects as many as 1 in 200 children.

“They also were still very skeptical this was an actual, true, diagnosis,” Quick said of her experience with various doctors, “which is just so disheartening when you’re trying to help your child. Finally you realize what he has can be treated. And your pediatrician says I don’t really think that’s true.”

Quick said it’s very difficult to get treatment for PANDAS because there are so few specialists, and those that exist don’t take insurance.

Teresa Champion of Springfield had a similarly slow and frustrating process with her son becoming diagnosed and treated for PANDAS.

But Champion’s son, 23, had a pre-existing condition of autism that “muddied the water” for a lot of practitioners. That was seen as the root of other issues.

Like Quick’s son, he had sudden-onset separation anxiety, panic attacks and an eating disorder.

“This is a diagnosis that waxes and wanes,” Champion said. “It isn’t just bacterial, it can be viruses, cold, flu, that triggers the immune system to respond. The difference is my son really didn’t get treatment. The diagnosis teased out from autism until much older. It was determined to be pediatric, many practitioners don’t think it carried over into adulthood, which is absurd.”

Quick and Champion agree, by far the most challenging aspect of PANDAS is getting medical treatment. They’re hoping that that will change, for their sons and other living with either diagnosed or undiagnosed PANDAS or PANS, with a bill brought to the Virginia General Assembly by Del. Eileen Filler-Corn (D-41).

HB 2404 CALLS FOR creating an advisory council on PANDAS and PANS. The purpose of this body, according to the bill summary, would be to “advise the Commissioner of Health on research, diagnosis, treatment, and education relating to these identified disorders and syndrome.”

Champion hopes a group like this would be able to raise the level of education and training for physicians in Virginia, so there can be more treatment, including antibiotics, steroids and cognitive behavioral therapy.

Filler-Corn’s bill passed the House of Delegates on Feb. 7. The senate passed it with amendments on Feb. 20. One day later, the House agreed to the amendments and adopted it by a vote of 93 to 4.

“Having the opportunity to work with Ms. Champion, Jessica Gavin and so many other Virginians who have loved ones are affected by this disease is a reminder of why I ran for office in the first place — to help make people's lives better,” Filler-Corn said in a statement. “For many parents, it takes an average of three years and eight different doctors before their child is diagnosed with PANS. Creating this advisory council will bring much needed awareness to this debilitating disease. I am grateful for the overwhelming bipartisan support this bill has received.”

Quick said their hope is that with this legislation, more and more pediatricians will recognize it.

“There are probably a lot of kids suffering from symptoms that are related to PANDAS,” she said, “and not getting treated. Because people don’t know what it is.”