Realistic goals and specific plans among keys to success. 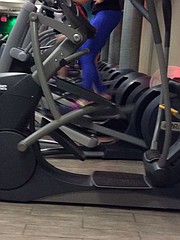 Losing weight and getting in shape are two popular resolutions that people make at the beginning of a new year.

“One reason that many people fail to achieve their goals is that they might not be ready to make the change, even if they would benefit from doing so.” — Joel Bitman

Every January for the last five years Faye Ripke has resolved to lose weight and lead a healthier lifestyle. However, the only thing she has to show for it, she says, is a trail of unused gym memberships and a wardrobe of clothes that have increased in size.

“Both of my parents died from heart attacks,” says Ripke, 57 of Fairfax Station. “My doctor keeps telling me that I need to do more aerobic exercise to get my heart rate up every day and drop about 75 pounds.”

Losing weight, getting organized, achieving physical fitness and improving one’s finances are the most frequently made resolutions, often the guilt-induced responses to holiday indulgence. According to a study published last month in the Journal of Clinical Psychology, only eight percent of people who make New Year’s resolutions keep them and achieve success.

“One reason that many people fail to achieve their goals is that they might not be ready to make the change, even if they would benefit from doing so,” said Joel Bitman, a Bethesda-based psychotherapist. “Another reason is that people often set unrealistic goals or don’t have a plan to achieve their goals.”

Actually wanting to make the change that the resolution would bring about is the first step followed by developing strategies to achieve it. “When you set a goal, say quitting smoking for example, ask yourself whether it’s something that you really want to do or something that you think you should do,” said Bitman. “If you’re doing it because you think you should or because society is telling you that you should, but the reality is that you really enjoy smoking, it will be much harder, if not impossible, to quit.”

While it is easy and often tempting to look at pictures of ultra thin models and resolve to transform one’s body by the end of the year, setting unrealistic expectations can sabotage a set of goals, says Alicia Brand, a Falls Church personal trainer.

“Trying to lose 60 pounds in time for a beach vacation during spring break isn’t going to happen,” he said. “But losing 10 pounds by April is absolutely achievable for most people.”

A key to that achievement is creating a set of concrete goals that are realistic, specific, measurable and include a timetable, says Bittman. “You actually have to make mindset changes and behavioral changes in order to successfully reach a goal, and changes in behaviors are often quite difficult,” he said. “But if you are able to make small changes and reach small weekly, daily or even hourly goals, you’re more likely to gain confidence to keep going. It’s easy to become discouraged and give up.”

“If you want to become more fit, but you haven’t exercised in years, you might begin by committing to walking 30 minutes a day, three days a week,” said Brand. “That is much more realistic than signing up for a gym membership and planning to spend an hour there every day until you’ve whittled your body down to a size two.”

Failing to recognize small accomplishments and rewarding oneself for reaching milestones is one reason that Bittman believes many resolutions made in January fizzle into a pipedream by February. “If you commit to skipping morning coffee at your favorite coffee shop each day for a week, and saving the money that you would have spent, you can celebrate by allowing yourself to have a small latté on Sunday morning.”

Avoiding high-risk environments that can sabotage even the best-laid plans is a suggestion that Brand gives to her clients. “It’s like if you’re an alcoholic you should stay out of bars,” she said. “If you’re trying to lose weight, surround yourself with people who have healthy eating and fitness habits.”