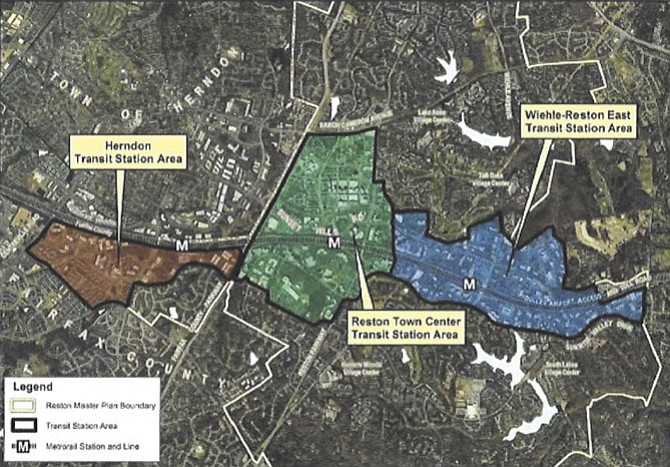 A map of the Reston Transit Station Areas (TSAs) that would be subject to the funding proposal. The Wiehle-Reston East and Reston Town Center TSAs are located along both sides of the Dulles Airport Access Road and Dulles Toll Road (DAAR) from the Virginia Department of Transportation owned storage facility to the east, Hunter Mill Road on the southeast and Fairfax County Parkway on the west. The Herndon TSA is located along the south side of the DAAR and is bounded by Fairfax County Parkway on the east, Fox Mill Road and Sunrise Valley Drive on the south and Centreville Road on the west. Land to the north of the Herndon station is within the town of Herndon. Photo courtesy of the Reston Master Plan Special Study of the Fairfax County Comprehensive Plan 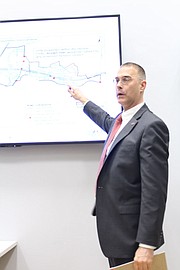 Fairfax County Department of Transportation Director Tom Biesiadny answers questions from the audience during a public meeting on Thursday, Jan. 19. The Department is seeking permission from the Board of Supervisors to establish a 40-year road fund and a special service district to raise $350 million from people who own residential and commercial property near metrorail stations.

The Fairfax County Department of Transportation is seeking permission from the Board of Supervisors to establish a 40-year road fund and a special service district to raise $350 million from people who own residential and commercial property near metrorail stations.

The county agency requested authorization to advertise a public hearing on the Reston Transportation Funding Plan from the board during its meeting on Tuesday, Jan. 24, after deadline for this paper.

If approved, a public hearing will take place on Feb. 28

Property Owners Affected Are Only Within The Reston TSAs

The money raised by the funding plan would be used to construct transportation infrastructure projects that were identified by the county’s Reston Transit Station Areas Comprehensive Plan amendment, which the Board of Supervisors adopted on Feb. 11, 2014.

These include roadway improvements, intersection improvements and new roadways to add to the TSA area’s road network to improve connectivity to, from and around the transit stations.

The funding plan will use $1.2 billion in public funding:

The funding plan will use over $1 billion in private funding, with the majority expected to be raised through in-kind contributions from developers who will build new projects in the area.

Still, there is a $350 million balance that the county needs to make up over the 40 years.

Residential property owners would pay for 4 percent of this balance, or $14 million, by contributing to a service district, according to Fairfax County Department of Transportation Director Tom Biesiadny.

Developers would be responsible for the rest through in-kind contributions or payments to both the service district as well as the road fund.

The tax district will affect all property owners in the TSAs, but the road fund is only for new development. By right construction is not subject to the road fund payments.

For the road fund, the rates are proposed at $2,090 per dwelling unit for residential property and $9.56 per square foot of commercial property.

The service district rate for homeowners is 2.1 cents per $100 of assessed value of the property.

According to Biesiadny, the average assessed value of residential property in the Reston TSAs is $260,000. At the proposed rate, that would equate to $54.60 per year.

“It’s a very small percentage of the total,” says Biesiadny.

Nearly 30 people gathered at the North County Governmental Center on Cameron Glen Drive in Reston on Thursday, Jan. 19, for the first public meeting about the proposed funding plan.

“Developers should be paying every penny of this stuff,” Tammi Petrine, co-chair of the Reston 20/20 Committee, said during the Q-and-A portion of the meeting. “Residents who are trapped in that corridor should have nothing to do with it.”

Petrine, who does not live within the TSAs, also voiced concern over the rates for the service district and the road fund and how they are not proposed to be fixed. As proposed, the rates would be set annually by the Board of Supervisors.

“The board sets the rate as part of their budget negotiations,” Biesiadny said. “It can’t just go up and down a hill. It’s set once a year.”

Those in attendance demanded that Supervisor Hudgins give her stance on the proposal.

Though Hudgins did not say she would vote for or against the proposal, she did say that the mechanisms have been successful in the past.

“We have used road funds and tax districts efficiently and responsibly in Fairfax County in the past,” Hudgins said.