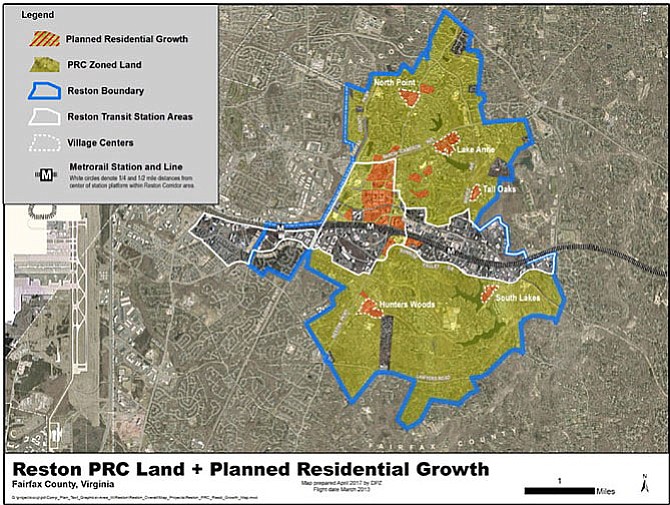 Director Fred Selden and Deputy Zoning Administrator Cathy Belgin both listen to complaints from constituents during a community meeting about the zoning amendment in May.

Fairfax County scheduled a fourth meeting to discuss a contentious zoning amendment with the public on Monday, Sept. 25, at 7 p.m. at Lake Anne Elementary School.

The proposed amendment would alter the zoning regulations by changing the density cap in Reston for areas that are zoned Planned Residential Community (PRC) District. The current cap for these areas, which the majority of Reston is zoned, is set to an average of 13 people per acre. The Fairfax County Department of Planning and Zoning is recommending raising the cap to an average of 16 people per acre.

Government officials were met with significant pushback from Restonians during the original three community meetings about the amendment earlier this summer on May 3 and May 15 at the North County Governmental Center and May 24 at Lake Anne Elementary School.

“Public feedback is critical to the land use process, and this is why we held three public meetings in May to hear from residents on the proposed zoning ordinance amendment,” Cathy Belgin, deputy zoning administrator of the county’s Department of Planning and Zoning, wrote in an email. “The proposed amendment is intended to align the ordinance with the adopted Reston master plan. We have listened closely to what residents have said at these meetings and by email, and we are working to answer the questions that have been raised.”

MANY INDIVIDUALS stood up to voice concern for congestion, claiming Reston would not be able to accommodate the increased density the new zoning amendment would allow.

But Belgin and her colleagues at the planning and zoning department are pushing for the amendment, saying it is required to implement Reston’s comprehensive plan.

The Reston Master Plan Special Study began in 2009 and concluded when the Fairfax County Board of Supervisors adopted it on June 2, 2015. The document updated Fairfax County’s Comprehensive Plan to integrate changes to Reston, including residential neighborhoods, Village Centers, commercial areas and the Reston Transit Station Areas (TSAs).

The $2.2 billion Reston Transportation Funding Plan will construct roadway improvements, intersection improvements and new roadways to add to the Reston TSA’s road network to improve connectivity to, from and around the transit stations.

“County staff is now working on implementation of the initial projects and the timelines for the rest of the projects,” Belgin said.

The funding plan will use $1.2 billion in public funding over 40 years. The county expects in-kind contributions from developers to pay for $716 million, but private funding will make up the $350 million balance.

THE PROPOSED CHANGE to the zoning ordinance is simply to align the regulations with the Reston master plan, according to Belgin.

“I appreciate hearing from the community and acknowledge the time and effort of the Reston 20/20 Committee and Rescue Reston in providing their view of the proposed amendment,” Hunter Mill District Supervisor Catherine Hudgins wrote in an email. “As the process moves forward, consideration will be given to all requests, opinions and comments related to the proposed zoning ordinance amendment that staff will be bringing forward for consideration by the Board of Supervisors.”

Despite an overwhelming pushback against the amendment from Restonians who attended the meetings in May, the amendment is scheduled to be presented to the Board of Supervisors for authorization in November; Planning Commission public hearing in December; and Board hearing in January 2018.