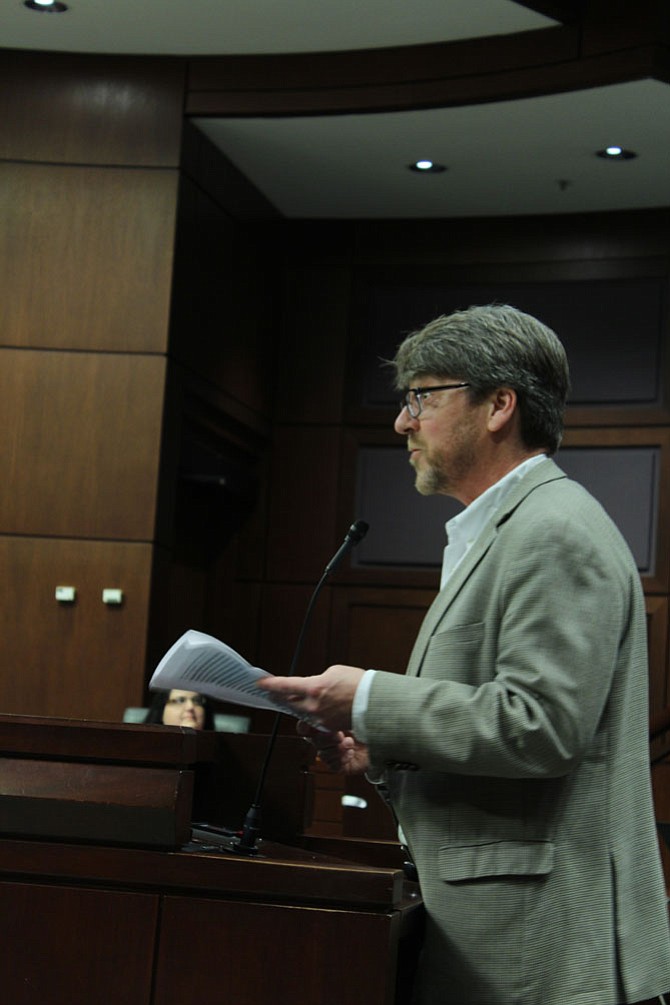 Andy Sigle, chairman of the Reston Network Analysis Advisory Group, testified in favor of the plan and its funding mechanisms. Photo by Fallon Forbush.

Tammi Petrine, co-chair of the Reston 20/20 Committee, and her counterpart Terry Maynard testified against the plan because it relies on taxing homeowners in a special service district to pay for its expenses.

John McBride, representing the Reston Association Board of Directors, acknowledged the need for the infrastructure projects identified in the plan, but testified against applying the plan’s service district charges to homeowners. 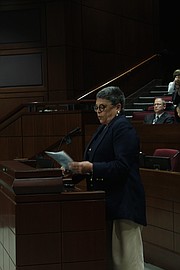 Maggie Parker, spokesperson for developer Comstock Partners and member of the RNNAG group, testified in favor of the plan and its funding mechanisms. “This funding plan is burdensome,” she said. But she also said it is an “investment in our community and the citizens who live and work here.”

The Fairfax County Board of Supervisors approved the $2.2 billion Reston Transportation Funding Plan and its associated road fund on Tuesday, Feb. 28, despite vocal opposition from community members.

The plan will only affect those who own property within the Reston Transit Station Areas (TSAs). The county designated these areas near the Washington Metropolitan Area Transit Authority metrorail stations that will serve Reston on the Silver Line: the Reston Town Center, Wiehle-Reston East and Herndon stations.

The Fairfax County Department of Transportation has been working on the plan since the county’s Reston Transit Station Areas Comprehensive Plan amendment was adopted by the Board of Supervisors on Feb. 11, 2014.

Most of the public discussions regarding the plan have been through the Reston Network Analysis Advisory Group (RNNAG), which Hunter Mill District Supervisor Cathy Hudgins’s office established. The group is made up of nine members:

The RNNAG group voted to form a road fund and a special service district to help pay for the projects outlined in the county’s plans. However, the vote was not unanimous.

ONLY FOUR MEMBERS voted for the proposed plan; one member voted against; two members abstained; and two members were not present to vote. Though only seven members participated in the vote, it was a quorum.

“While the vote was not unanimous in regards to the specific road fund and service district contribution rates, the advisory group was in agreement regarding the general structure of the funding plan and seemed that the … rates fell within a range which the group agreed was acceptable,” said Andy Sigle, chairman of the Reston Network Analysis Advisory Group, during the hearing.

Sigle was the only member of the nine-member group to vote against the proposed plan, but testified on behalf of the entire group.

The tax district would affect all property owners in the TSAs, but the road fund is only for new development. By right construction is not subject to the road fund payments.

For the road fund, which the Board approved, the rates are $2,090 per dwelling unit for residential property and $9.56 per square foot of commercial property.

The proposed service district rate for homeowners is 2.1 cents per $100 of assessed value of the property. The Board of Supervisors has not voted on this yet.

Broader public meetings based on the RNNAG’s approved plan did not begin until January, when FCDOT invited the public to two community meetings. One was held in Reston in January and the other was held outside the town of Herndon in February, just days before the hearing with the Board of Supervisors.

Participants at both meetings were vocally opposed and demanded answers as to why they didn’t receive direct mailings alerting them to the plan. They also said they felt like their participation was too late in the process to make a difference.

“The majority of this is being paid by public dollars and by developers,” said Hunter Mill District Supervisor Cathy Hudgins, during the hearing. “It is a difficult task, but we believe that it is an important task because as Reston continues to grow today, we have congestion. We have very bad congestion.”

Springfield District Supervisor Pat Herrity pushed back against the plan and was critical of its enormous cost.

“We’re funding this based on a Lamborghini when a Cadillac might do,” Herrity said during the hearing.

He decided to abstain from the vote.

“I don’t think we’ve got the demand to justify some of what we’re building here,” he said.

THE PLAN’S ESTIMATED COST is more than $2.2 billion over 40 years.

Federal, regional, state and local public funding in the amount of $1.2 billion, or 53 percent of the total costs, have been allocated for the projects over a 40-year period, according to the FCDOT.

The rest of the bill, 47 percent, would be paid by commercial and residential property owners.

The department expects in-kind contributions from developers to pay for $716 million. The plan’s road fund and proposed special service district would foot the rest of the costs: $350 million.

The Board will have a hearing on the plan’s associated service district, which would affect homeowners, on Tuesday, April 4, at 2 p.m.