Arrest Made in Shooting at Police Car in Great Falls
Votes

Arrest Made in Shooting at Police Car in Great Falls

Suspect first apprehended in Herndon for waiving a gun. 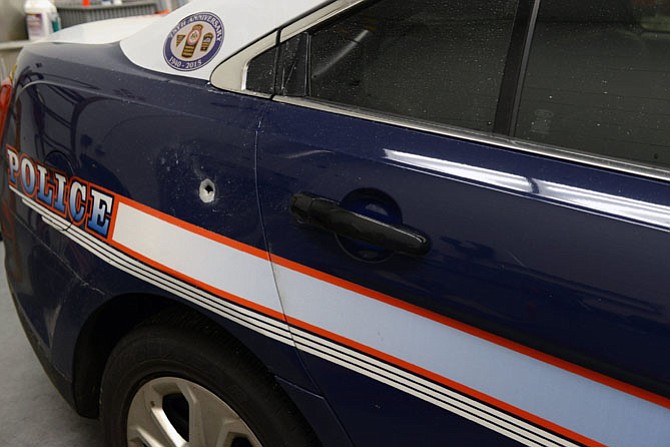 Virginia — Just before midnight on Jan. 22, several shots were fired at a marked police cruiser from another vehicle in the Great Falls area, Fairfax County police said. The other driver and at least one passenger who bailed out while police were in pursuit managed to escape capture at the time.

In a press conference the following day, Fairfax County Police chief Edwin Roessler asked the community for help in locating the suspects.

Rain over night makes it difficult to determine license plate information on the suspect’s vehicle from in-car video of the incident.

Hardly 24 hours later, Roessler was in front of cameras again, announcing that a suspect had been arrested and charged with attempted capital murder and using a firearm in the commission of a felony.

Brian Neftali Landaverde, 21, of Herndon was first apprehended by Town of Herndon police officers for an incident unrelated to the Fairfax County shooting. Herndon Police Chief Maggie A. DeBoard said officers responded to a complaint of a man flashing a gun around in a parking lot on Elden Street.

When officers approached Landaverde, the man matching the description from the complaint, he took off running but was soon caught.

Statements were made during the arrest, DeBoard said, that led officers to believe their suspect might be connected to the shooting in Great Falls. Fairfax County detectives and the investigation continued from there.

“It was good police work all the way around,” DeBoard continued. “Our departments have had a long history of working very cooperatively and effectively together.”

THE SEQUENCE on Jan. 22 began with what police describe as a white older model sedan running a red light on Georgetown Pike. An officer out of the Reston police district station attempted a traffic stop nearby at the 600 block of Rossmore Court. At that point a passenger got out of the suspect’s car and ran off. 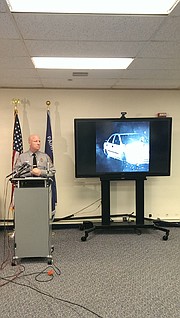 In a Jan. 23 press conference, Fairfax County Police chief Edwin Roessler begged the community to help bring suspects to justice who ran from a routine traffic stop and then allegedly fired.

Two juvenile suspects believed to be in the car with Landaverde have been taken into custody and are being interviewed.

“The driver of the car then sped away from the cruiser, making a U-turn in the cul-de-sac,” police said in a statement, “then traveled back toward the officer and opened fire, striking the cruiser at least twice.”

The police car was hit on the hood, feet from the vehicle’s interior, and again on the passenger side rear quarter panel.

The officer then called in the shooting to dispatch, Roessler said, and resumed pursuit of the suspect’s vehicle. But the suspect eluded the officer heading westbound on Georgetown Pike.

It was determined the shots were fired from inside the vehicle, through the windshield.

The officer did not return fire, the chief said, as the suspect’s car came at the cruiser at a high rate of speed.

The officer was not injured and the name is being withheld while a risk assessment is completed.

“This was hopefully not a targeted ambush situation,” said Roessler. “We need to vet through that process.”

THE LAST TIME an officer was fired upon was during a jewelry store heist in Springfield last spring, Roessler added.

“The community provided us with leads, Herndon police officers were proactive, not just doing their job, but going above and beyond,” he said, also praising the work of Fairfax County detectives, “and were able to connect a person of interest in the Town of Herndon to this crime.”

The investigation of the Great Falls shooting is still underway, while Landaverde is incarcerated at the Fairfax County Adult Detention Center.