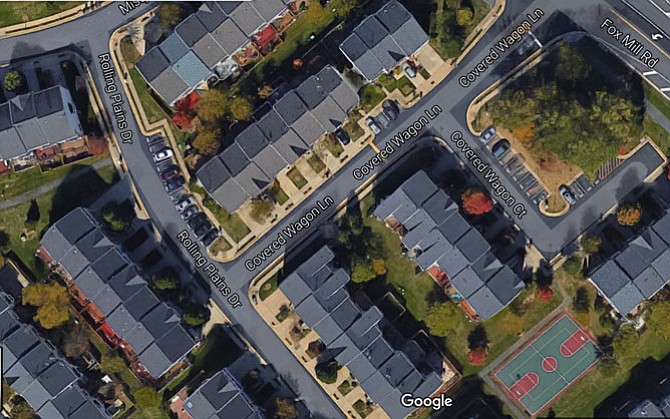 The suburban neighborhood where the scene of the crime occurred is directly off Fox Mill Road in Herndon, outside of town limits. Parking on the streets within the neighborhood is by permit only. Less than 80 steps from the street of the shooting sits the neighborhood’s basketball court, where children often play.

Fairfax County chief of police Edwin Roessler has yet to release the name of the 16-year veteran officer who fatally shot Mohammad Azim Doudzai, 32, at his Herndon-area home on Jan. 16 this year. On Feb. 7, FCPD said the unnamed officer has filed a temporary restraining order to keep the name from being released.

“In essence,” the order reads, “plaintiff invokes the doctrine of ‘state-created danger,’ contending that the County must be enjoined from disclosing plaintiff’s name or other identifying information to the public because such disclosure would violate the Due Process Clause of the 14th Amendment by creating — or increasing the risk of — danger to plaintiff.”

Ten days following the shooting, Roessler announced his threat assessment regarding the officer was incomplete. The 10 days is in itself significant, in that it’s part of new policy for FCPD that was recommended by the Ad Hoc Police Practices Review Commission and approved by the Fairfax County Board of Supervisors.

“If the Chief has determined a credible threat to the officer’s safety and/or the safety of their family cannot be fully investigated or mitigated within the 10 days and additional time is needed,” the policy continues, “the Chief shall inform the Board in writing — through the Chairman of the Board and the Chair of the Board’s Public Safety Committee — of his decision not to release the information or to delay the release of the information, and his reasons therefore.”

THIS IS THE FIRST such incident since the policy was adopted. Along with the announcement of the restraining order on Tuesday evening, Roessler confirmed the risk assessment has still not been completed.

“I have not made a decision regarding the name release,” Roessler said. “This process exists to determine if there is any credible threat against the officer. I will carefully monitor and follow any and all legal decisions in this matter.”

The restraining order affirms, however, that based on a Feb. 6 telephonic hearing where counsel for both parties presented arguments Roessler “is now poised to disclose plaintiff’s identity to the public.”

The chief was scheduled to appear in U.S. District Court in Alexandria on Feb. 9 for a preliminary injunction regarding the restraining order. However, FCPD Public Affairs Bureau director Julie Parker said the case has been continued. It was removed from the day's docket.

Police had previously released that officers were called to Doudzai’s home after a call from two of his brothers, on their way to the hospital after having been shot by him. They had gone to the house at the request of Doudzai’s girlfriend after an argument, police said.

A perimeter was set up by police around Doudzai’s residence, during which time they said multiple fires were set inside the house and there were several reports of gunfire.

Officers learned while negotiating with Doudzai there was an additional 29-year-old hostage, a non-related roommate, still inside the home. Officers decided to approach the home; when they did, Doudzai came out “with at least one knife in hand,” police said, and was shot.

The unnamed officer from the restraining order fired a service weapon, however police said other officers used less-lethal force on Doudzai as well.

The new communications policy lays out a specific time extension for the chief releasing an officer’s name and other information. However, it does specify “the Board and the public expect the Police Department to release other appropriate preliminary factual information and updates to the public as soon as possible.”

THE POLICY dictates the supervisors may review the chief’s decision at the next regularly scheduled board meeting and, if they deem it necessary, may “direct the Chief to release the name(s).”

Supervisor John Cook (R-Braddock), chair of the board’s public safety committee, said that the matter has been put on the supervisors’ closed session agenda the day of their regular meeting on Feb. 14. If Roessler hasn’t released the name by then, Cook said, he will appear at the closed session and provide detailed reasons as to why he’s still withholding the name.

At that point the board will decide whether or not to give him more time or direct the chief to release the officer’s name.

The Board of Supervisors approved policy also emphasizes that 10 days is a limit, not a standard, and the importance updating other information about the event.

The policy reads: “It is important to note the 10 day period is primarily related to the release of officer names and is only designed as a limit to not be exceeded without cause, not a recommended standard, and the Board and the public expect the Police Department to release other appropriate preliminary factual information and updates to the public as soon as possible.”