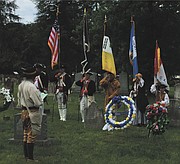 Gravestone of James Campbell with bronze Sons of the American Revolution marker.

Jacob Schwoerer salutes as he presents a wreath from the Children of the American Revolution.

More than 200 years have passed since the Revolutionary War patriots were successful in their fight for independence from Great Britain. The Sons of the American Revolution is an organization whose members carry out patriotic, historical and educational activities to commemorate the memory and sacrifices of their ancestors who fought or aided in the American Revolution. One ongoing program locates and marks the final resting place of those who participated in the struggle for freedom.

The gravestone was marked with a bronze marker which depicts the familiar Continental soldier with his musket, ready to defend his country. The marker consists of four arms and eight points, each point being decorated with a gold head. The source of the cross is the ancient chivalric Order of St. Louis. The cross is connected with a circular laurel wreath, a Napoleonic symbol recognizing faithful service and merit. The year 1775 is inscribed at the base — the year the “shot heard round the world” was fired at Lexington Green, Mass. By placing markers, the Sons of the American Revolution hope to catch the attention of visitors who may realize they have ancestry to the patriot whose grave is marked.

If someone discovers that they have a Patriot in their lineage, they can contact the Sons of the American Revolution to start the process of acknowledgement and commemoration. To proceed with the ceremony and acknowledgement, the person must prove ancestry and prove the ancestor was a patriot, much like the process to acknowledge James Campbell.

Colonel William Grayson Chapter President Mike Taimi presented the biography of James Campbell — his fifth great grandfather. James Campbell was born about 1745 in Scotland. He came to America, initially settling in Somerset County, Md. where he was recruited to serve in the Continental Army from July 30, 1781 to Dec. 10, 1781. His rendered service to the cause of American Independence establishes that James Campbell was a patriot of the American Revolution.

James Campbell married Leah and later settled in Carrborough, Va. in 1788, a port city on the Potomac River, now known as Quantico. By 1793, James Campbell moved to Alexandria, where he was jailor from 1798 to 1816. In 1816, James was appointed messenger to the Alexandria Town Council and he retained this position until his death in 1821. A review of the Alexandria Town Council minutes reveals that James Campbell also served terms as town crier, constable, and Captain of the Watch. He was also known to have leased a blacksmith shop. He had three pieces of property in what is now Alexandria’s Old Town; one on Cameron Street, one on Prince Street and one on Columbus Street. He lived and subsequently died in his Cameron Street house. The home still exists today, with an address of 313 Cameron St. and is the site of a ladies boutique.

His tombstone, reads: "In Memory of Captain James Campbell, a native of Scotland who departed this life March 18, 1821 in the 76th year of his age." His obituary which appeared in the Alexandrian on March 20, 1821 referred to James Campbell as "a long and respected citizen of this place." That he was, and, now his legacy includes that he was a patriot of the American Revolutionary War.