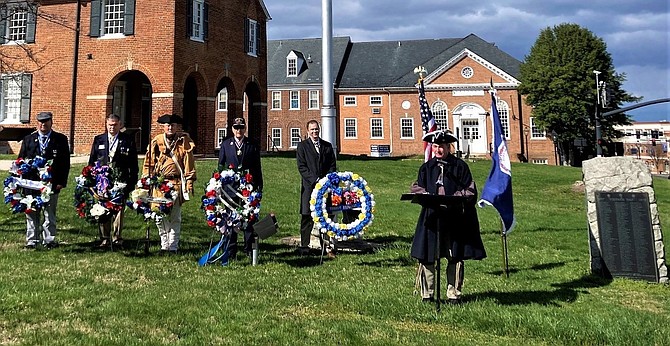 On Sunday March 27, the Fairfax Resolves, Sergeant Major John Champe and Colonel William Grayson Chapters of the Sons of the American Revolution honored the men and women who served and sacrificed during the now, second- longest conflict in United States history.

The commemoration was held at the Fairfax County Vietnam Veterans Memorial outside the historic courthouse in Fairfax City. It honored the 9 million veterans who served on active duty in the U.S. Armed forces from Nov. 1, 1955, to May 15, 1975. That number includes 2.7 million U.S. service members who served in Vietnam, 58,000 who lost their lives, 304,000 who were wounded and 1,253 still missing in action.

Those present paid homage not only to them, but to their comrades present at the event. Compatriots Larry McKinley, Mike Weyler, Ross Schwalm, James Cordes and Jack Sweeney spoke of their own experiences, as well as those of others who served, and the lessons learned because of that war. They said they are “forever indebted to all our Vietnam veterans.”