Bringing “Play By Play” to screen. 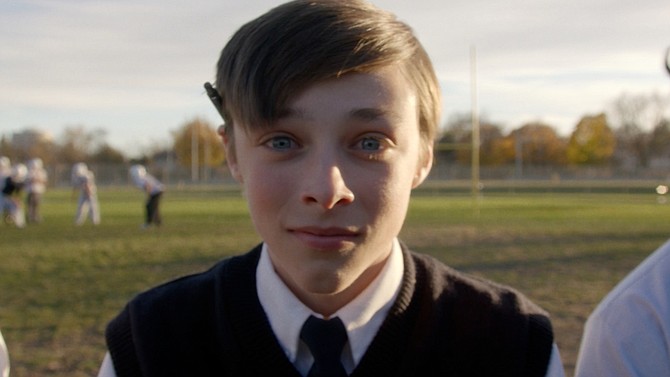 Kevin Mann, a Potomac native who has established himself as a television, film and video producer in the entertainment industry, is proof that show business actually can provide fertile ground for life- and art-enhancing personal connections.

Mann is the executive producer of Complex Networks’ new television series, “Play By Play” – a fictional coming-of-age story. Fittingly, the actual making of this series, which debuted last Tuesday, June 28, is a testament to authentic, human connection. The eight-episode season is the result of a bond that Mann shares with the writer of “Play By Play’s” screenplay, Kevin Jakubowski.

“The script really spoke to me, and it really made me think about what was going on at the time the story is set, in the 1990s,” said Mann, who immediately recognized parallels between the protagonist’s high school experience and his own at Washington D.C.’s Gonzaga College High School. “The script came to Haven Entertainment as a pilot, and, immediately, it was something we really liked and felt it had kind of Wonder Years vibe to it. I saw the potential, how successful it really could be.”

Haven Entertainment is Mann’s production company. In addition to its production business, Haven Entertainment represents writers, directors, and actors. Through the process of Jakubowski becoming one of Haven’s writers, the two Kevins realized they had more than a first name in common. More significantly, they shared battle stories from the front lines of adolescence in the 1990s while attending rigorous Catholic prep schools.

Although “Play By Play” hits especially close to home for viewers like Mann and Jakubowski – those whose high school diplomas are time-stamped with a 1990s date – Mann said the show’s reach will extend far beyond Generation X. Basic high school survival is a universal milestone, so Mann sees no limit to audience appeal.

“Of course, I get all the jokes, and even though my nephew doesn’t, he still really liked it,” Mann said. “The show still appeals to Millennials. It’s got stuff for people in their late 30s and early 40s, but there’s enough content so that kids who are currently in high school will enjoy it, too. From the beginning of working with this script, we saw that this show had the potential to target a wide audience covering multiple demographics.”

Viewers might also be able to sense the off screen chemistry between the actors, which likely adds dimension to the storylines played out onscreen as well. Ben Getz, an actor who has a key supporting role in “Play By Play,” said the friendships he forged between filming made this project for him unusually special.

“Everyone grew really close,” Getz said. “The cast and crew really started to become a family over the month that I was there. It helped that we were in Iowa without much to do, all being in the same hotel. We ended up eating together, playing games together and hot tubbing together especially after shooting outdoor scenes in the frigid Iowan winter.”

The tight bonding extended beyond the actors, too.

“Kevin Mann was great,” Getz said. “We actually bonded over our Maryland connection at one point. All of the pieces that were put together on the production fit so well and I think that credit has got to go to Kevin and the other producers.”

Complex Networks, which marketed “Play By Play” as a sports comedy leading up to the premiere, will air all eight episodes through its digital medium, go90.

“When I first brought the project to Complex, they were just starting a digital distribution platform,” Mann said. “So, the plan was for ‘Play By Play’ to air through this space. Every week, Complex will put an episode out for viewers to stream. It’s a lot like Netflix. Viewers can watch an episode any time once it’s out there.”

While audience reception has been “so far, so good,” it’s far too early to tell just how successful the show will be. One small drawback of releasing a new series through a digital forum like Netflix or go90 is that there is no sense of urgency for a viewer to tune in and watch an episode at any particular time. In other words, it’s possible – even likely – people who will ultimately become the show’s biggest fans still have yet to see the first episode.

“Right now, it’s hard to tell, because TV ratings in this case don’t work the same way as they do with traditional television,” he said. “I think it'll take three or four episodes for the recognition to spread and for the positive reception to really come out. People will see that there’s a little something for everybody.”

In the meantime, Complex Networks seems to see long-term potential for the series.

“We have already been renewed for a second season,” Getz said. “As far as [my character] Justin’s future, it’s tough to say. Justin’s dating the main character’s love interest, so he might be killed off in a tragic hacky sack accident. If that is the case, I just hope it happens somewhere in season three or four.”

It’s not so crazy to think that “Play By Play” will turn into the next big television hit of the digital realm. Any show that offers the perspective that there is indeed life – and hope – after high school can only boost morale for those trudging through a phase of life riddled insecurities. The show achieves this as it introduces the current-day protagonist, Pete Hickey, who narrates his teenage years through flashbacks. Pete’s football career may start and end on the sidelines of a high school football field, but, viewers watch him struggle with the knowledge that he will ultimately find a different way to stay in the game.

If the show isn’t enough to give viewers hope that life can indeed volley into pleasantly unexpected arcs, they should consider the real-life story of Mann.

Reflecting on his own high school experience, Mann said that, for one, his report cards were nothing to write home about. He had hobbies and interests, but he didn’t realize his true potential for professional fulfillment and success until he was out of college.

“Originally, I wanted to go to law school and then return to D.C.,” Mann said. “But, I got lucky and started working for Jimmy Kimmel as a production assistant. I was mostly getting coffee and driving people around. Kimmel was really good to me, and I began to see that production was a really great way to both pursue business and be creative.”

Mann is no benchwarmer. With the perspective he has these days, he’s also happy not to be quarterback, either. Instead, he compared his role as executive producer for a television series to that of a football coach. He’s at his best when his focus is on the bigger picture, and how to make it all come together.

At this point in his career, Mann said that he can be relatively picky about the projects he ultimately pursues. Haven Entertainment is currently working on more than 20 productions – spanning a wide spectrum of genres for both television and film. Having options to sift through, however, has not always been the reality for Mann.

“There are a lot of factors that go into deciding on the projects to produce,” he said. “A lot of it is content-based. I do a lot of sports documentaries, a lot of 30 for 30 programs for ESPN. Sometimes a job is a job, but, I try to produce the content that I would want to watch. That’s all easy enough to do now, but, in the beginning, I had to jump on any opportunity that came my way.”

Mann advises people – no matter the exact nature of their goals – to take chances early on, at a point in life when there is still time to make up for any potential fallout.

“My advice is, stick with it,” Mann said. “The entertainment business is really tough. It’s one of those things that you can't learn in college, so you have to go out there and just dive into it. You tell yourself, ‘it's going to take ten years.’ You can always find ways to make money and find a job, so don't panic or give up after a year or two. If you’re lucky enough to know your passion in your 20s, go for it. If you love it and you’re passionate about it, talent and hard work will usually find each other.”

To watch the first episode of Play By Play, visit https://www.go90.com/shows/playbyplay.