People: From Churchill to NFL to CNBC
Votes

People: From Churchill to NFL to CNBC 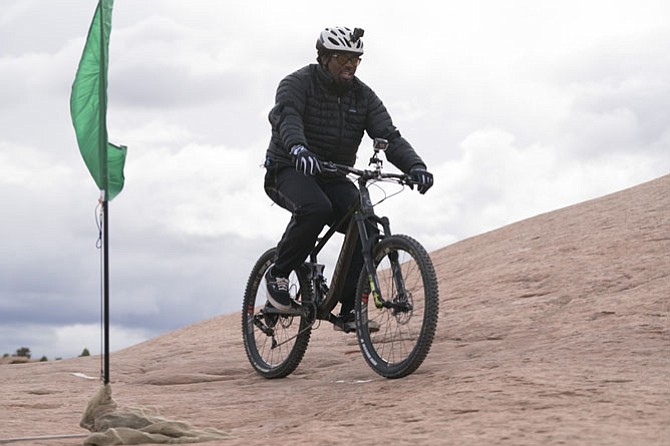 Potomac native and former National Football League (NFL) star Dhani Jones has paved a career path that will give children an idea of what they could do with their athletic talents without shedding blood or sweat.

As an investor on CNBC’s weekly television show, “Adventure Capitalists,” Jones travels around North America to experiment with — and potentially invest his own money in — outdoor sporting equipment and devices. The second season of “Adventure Capitalists” was scehduled to premiere on CNBC on Tuesday, Oct. 10 at 10p.m.

“I love being a part of ‘Adventure Capitalists’,” said Jones, who described the show as an outdoor adventure version of “Shark Tank.” “Episodes take place so that people can watch former professional athletes test athletic equipment, but they can also experience the backdrop of some beautiful places. We don’t want to only go where the entrepreneurs go, but we also want to go where they created the products. We love the boardroom because that’s where deals can be done, but for a lot of people, the office is outside — especially the entrepreneurs behind these products.”

“Adventure Capitalists” debuted last year with a four-episode run. The second season features six episodes. Future episodes will air on CNBC every Tuesday at the same time for the entirety of the season. Episodes are also available online the morning after they air on CNBC’s official website — www.cnbc.com/adventure-capitalists/.

Every week, viewers will watch three investors – former NFL linebacker Jones, former professional gymnast Shawn Johnson, and Olympic skier Jeremy Bloom – meet the developers behind outdoor innovations, and decide whether or not to invest their personal funds in these startup ventures.

“It’s a mix of products and services,” Jones said. “There are ski devices, different all-wheel drive motorcycles. For example, one product had a small part that a mountain bike would have to make it more rigid and flexible. There have been waterproof, fireproof gloves, and all sorts of workout tools and equipment. In the spirit of adventure, we go all over the country to test it all out.”

Last season, Jones said one of his favorite products that was an obvious “yes” for him was called the InstaPrivy.

“The InstaPrivy is maybe the product I loved most from the first season,” Jones said. “Imagine you’re at a major sporting event and waiting in line for a porta-potty. The lines can be really long and the porta-potties aren’t always ideal, of course. The InstaPrivy is a portable toilet with a pretty sophisticated privacy shield. The creator was a military veteran. I invested $100,000 in that one.”

Before the public ever saw Jones on national television, he was an all American child growing up in Montgomery County. His military family finally settled in Potomac.

Jones graduated from Winston Churchill High School, where he excelled both in the classroom and on a number of different sports teams — football, wrestling, and track. Perhaps his most lasting impression was on the football field.

“My experience in Potomac was amazing,” Jones said. “I saw it go from a quiet and reserved town to an extremely large metropolitan area. I’ve seen it grow so much, and it was a great experience. I benefitted from being in the greatest school system in the country. Our football team went to the state championship twice.”

Following his graduation from Churchill in 1996, he was a linebacker for the University of Michigan Wolverines.

According to NFL statistics, the average professional American football career lasts less than three and a half years. Jones’ NFL tenure more than tripled the average — he logged 11 seasons. His professional turf was in New York with the Giants, then in Philadelphia with the Eagles, and finally, in Cincinnati with the Bengals.

He has since launched multiple businesses and found his place on television. His first lead role was on the Travel Channel series, “Dhani Tackles the Globe.” The show, which lasted two seasons, featured Jones in different countries, taking a turn playing different international sports.

“I got the travel bug really early, growing up in a military family,” said Jones. “I’ve found that all you gotta do is go one place in order to catch it. Then you want to go everywhere. I got to do that with ‘Dhani Tackles the Globe.’ But, ‘Adventure Capitalists’ takes the travel to the next level. I get a real feel for the places we go, and thus, the viewers do, too.”

To this day, fellow Churchill Bulldogs remain in Jones’ professional – as well as personal – network.

“A lot of my friends from high school are venture capitalists,” he said. “I’m able to get advice from my friends regarding the decision-making I have to do on ‘Adventure Capitalists.’ It’s invaluable to be able to consult with friends who have been a part of my life from practically the very beginning.”

As an entrepreneur himself, Jones said he just might enjoy this phase of life even more than he did competing on the field.

“As an athlete, you accept that as you get older, you have to stop competing,” he said. “At least, you have to stop competing in the way you always have. Really, competition is a part of your entire life. Now, I’m competing on the investment side. When you’re done with your sport, you can start investing in what you love or have some kind of passion for. Then, you find yourself with at least a hand in running different businesses. It’s a natural next step. It’s why, when CNBC brought this opportunity to me, I couldn’t say ‘no.’ I’m having a great time.”