Mapping the Earth in Great Falls 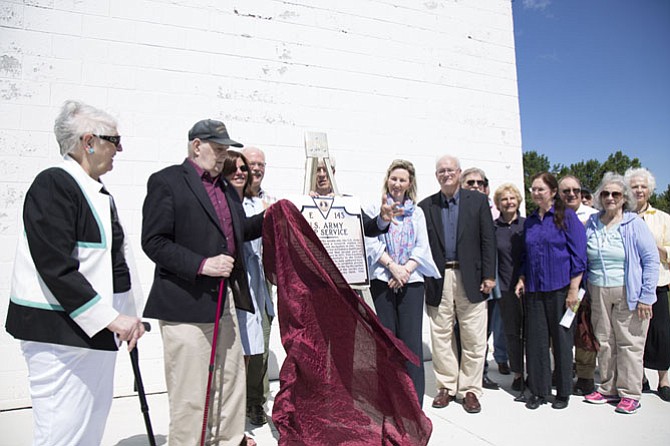 The new Virginia Department of Historic Resources historical highway marker was unveiled for the site near the intersection of Wynkoop Drive and Springvale Road: “Here, at a former Nike missile site, the U.S. Army Map Service established a research station to support geo-location and navigation in 1961. Two years later, the Map Service initiated a significant satellite tracking program that became part of the Defense Mapping Agency in 1972. This tracking system contributed fundamentally to the Global Positioning System (GPS). The data gathered here enabled geospatial scientists to establish precise geographical reference points on the Earth’s surface and to refine their estimates of the Earth’s true shape and variations in its gravity field. This facility closed in 1993.”

“Nearly 25 years ago, the people of this facility formed an important link in the GPS chain that almost all of us became dependent on, not only for commercial navigation such as ships and airplanes, but also finding directions to our favorite coffee shop,” Jack Fahey said of the work conducted at the site. Fahey is a retired employee of the National Geospatial-Intelligence Agency and former employee of its predecessor organizations, the Army Maps Service and Defense Mapping Agency.

A new historical highway marker was dedicated for the Observatory Park at the Turner Farm Park in Great Falls on Saturday, June 24, for the site’s role in establishing technology that many people rely on daily: GPS.

A marker bestowed by the Virginia Board of Historic Resources already exists for the site’s Cold War history, when anti-aircraft missile complexes were established on the grounds between 1954 and 1962. The history behind the new marker started in 1963 when the United States Army Map Service began a satellite tracking program on the site.

The Army Map Service, which was merged into the Defense Mapping Agency in 1972 and is now integrated into the National Geospatial-Intelligence Agency, was responsible for the publication and distribution of maps for use by U.S. military forces between 1941 and 1968. But what many don’t know is that until 1993, the work done at the observatory on the site and the data gathered by the Army Map Service and the Defense Mapping Agency fundamentally contributed to the world’s Global Positioning System, or GPS.

“It’s fitting that the pioneers behind our Global Positioning System get credit for their work,” Fairfax County Park Authority Deputy Director Aimee Vosper said during the ceremony. “While we all know GPS as that voice that guides us to our destination, sometimes with a little recalculating on the way, especially for me, its use extends far beyond our cars and our walking apps.”

During the time the project was running, creating maps could take up to two years, according to Jack Fahey, a retired employee of the National Geospatial-Intelligence Agency and former employee of its predecessor organizations, the Army Maps Service and Defense Mapping Agency.

“The tracking stations at this site consisted of very, very heavy electronic equipment housed in vans and linked to very large satellite arrays traveling around the sky,” Fahey said during the ceremony. “Those stations required months and months of data collection and ‘round the clock staffing by teams of technicians and surveyors.”

The Navigation System Time and Ranging (NAVSTAR) Global Positioning Service became fully operational in 1993, but received little attention at the time, according to Fahey.

Perhaps not many knew then that GPS would become an everyday utility for use at the tap of a smartphone app.

“The researchers and technicians and surveyors who were here nearly 45 years ago almost certainly had no idea that their work would lead to driverless cars and navigation systems that call out our directions from our wireless telephones,” Fahey said. “They would probably be very impressed today.”

Virginia Department of Historic Resources Board Chairman Clyde Smith attended the ceremony to congratulate the work the park and nonprofit Analemma Society put in to apply for the marker.

“People identify something they feel is significant, they go through sort of an arduous process of applying for a marker, they send it down to Richmond and we have a team of people who review the facts and determine if it is significant enough — as this certainly is here — for a marker and we put it together,” Smith said during the ceremony. “With enough patience, sometimes within probably a year of the idea being spawned, we end up with a marker.”

The Analemma Society has a partnership agreement with the park authority to develop recreational and educational astronomy programs at the roll-top observatory at the park in Great Falls. Getting this recognition was a significant step in recognizing the park as a resource for astronomy lovers.

“Definitely getting the Army Map Service marker is a milestone,” said Analemma Society Secretary Jacqueline Olin, who helped apply for the highway historical marker. “It’s always been known in Great Falls as a Nike missile site, but the fact that for 30 years it was engaged in this activity for the production of GPS, that was not known in the community. It’s quite a milestone. It’s very significant.”

Summer Classes at the Observatory Park at Turner Farm