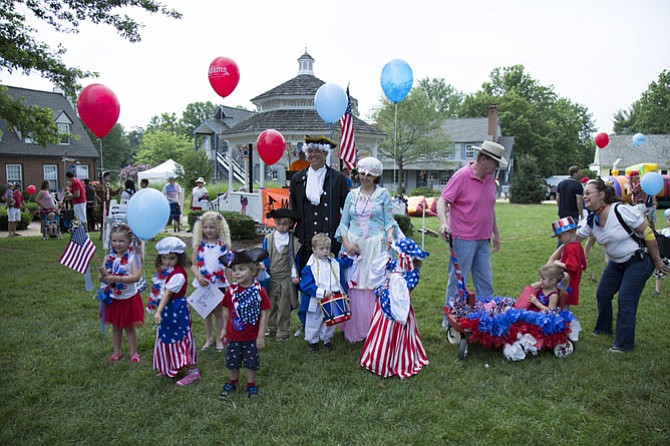 The foundation for Great Falls Friends and Neighbors sponsored and judged the Little Patriot Parade, which asked babies and toddlers up to 5 years old to show off their finest patriotic attire in a parade that marched around the gazebo on the green of the Great Falls Village Centre. Awards were given for “Young George Washington,” “Little Miss Betsy Ross,” “Most Patriotic Baby,” “Most Creative,” “Most Patriotic,” “Best Decorated” and “Star Spangled Family.” Photo by Fallon Forbush. 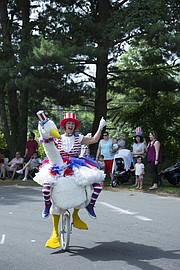 Lisa Polinori of Baltimore, who goes by “the unicycle lady” peddles down the parade decked in red, white and blue.

Women throw candy from the back of a CLS Landscape truck, which won an honorable mention for Best Business Float, second to Rossen Landscape. 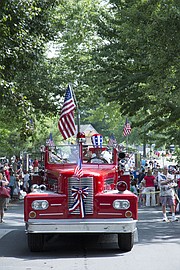 The Great Falls Village Centre was festooned in red, white and blue to celebrate Independence Day. The patriotic festival, “4th of July Hometown Celebration,” was organized by the Celebrate Great Falls Foundation.

Festivities began with a 5K walk and run race, hosted by the Great Falls Trailblazers, that started at the Great Falls Freedom Memorial at 8 a.m. and wound through local trails.

Approximately 196 joggers, walkers and runners participated in the race, according to Erin Lobato, director of the Celebrate Great Falls Foundation.

“I think that it was their best turnout yet,” she said.

The Great Falls Volunteer Fire Department also hosted a blood drive from 8 a.m. to 1:30 p.m. to support the Inova Health System. Those who completed the donor screening procedure received a free donor T-shirt.

Festivities continued at 9 a.m. with a Little Patriot Parade on the green of the Great Falls Village Centre, where babies and toddlers up to 5 years old marched or were carried or pulled in wagons around the gazebo in their finest patriotic attire. Prizes were awarded to participants for the best dressed in these categories:

THE VILLAGE CENTRE GREEN remained the epicenter of the holiday celebration for the rest of the afternoon with carnival games and music by DJ Jon Paul of Megawatt, Inc., who played tunes from the gazebo, and organ grinder Terry Bender, who played patriotic melodies from the sidewalk with his street organ.

For a brief time, the fun was brought to a halt when a 2-year-old child went missing.

“Henry, I love you. Hey bubba,” Ann Kainec said into the microphone at the DJ booth while holding back tears.

Her son Henry was instructed to wave and come to the gazebo at the center of the festivities while the crowd was told to look for a child matching his description: Short brown hair, white T-shirt with American flags on both sides and blue shorts. He was last seen on the green.

After a very long 15 minutes for Kainec, she saw Henry being carried towards her from across the green in the arms of Ted Cisneros. To her relief, she started sobbing as she embraced both Cisneros and her child who was somehow separated from her during the commotion of the celebration.

Cisneros, who was visiting from Nebraska, said he spotted Henry after he wandered away from the green and was attempting to cross Walker Road.

The police were informed that the missing child was found and the music and merriments proceeded.

By 10 a.m., the main parade with floats, horses, antique cars and pets kicked off. The parade started on Columbine Street, turned left onto Walker Road and made another immediate left into the Village Centre entrance by the Wells Fargo Bank before it looped around the south and west ends of the property, ending near the Old Brogue Irish Pub.

“We had about 18 organizations with floats and about 20 antique cars,” said Reena Brar, chair of the Great Falls July 4th Parade.

“I would estimate we had 1,000 or so spectators for the parade and afterwards for the hometown celebration,” said Lobato.

AFTER THE PARADE, burgers, hot dogs and snow cones were sold on the green while carnival and field games and festivities continued.

Though bursts of rain showers poured over the county in the early evening, the weather cleared up for the finale: Fireworks at Turner Farm Park.

The park gates opened at 6 p.m. for more live music and food from Mookie’s BBQ and ice cream from the Great Falls Creamery before the fireworks launched.

TDBank, which was the primary sponsor of this year’s 25-minute show, provided coupons for one free scoop of Great Falls Creamery ice cream to the first 500 people at the park, according to Eamon McCrann, chair of the Friends of the Fireworks organization that organizes the display each year.

“Everybody that works [the show] is a volunteer,” McCrann said. “We’ve had more than 60.”

The Boy Scouts of America Troop 55 and Troop 673 of Great Falls also agreed to volunteer, according to McCrann. The scouts cleaned the park the following day by combing the fields for remnants of the fireworks that the flashy show left behind.

“Many regulars felt it was the best show yet,” said Lobato. “Our crowd estimate is 3,000 plus for fireworks, as the parking lot was full. It was the best crowd to date and we've gotten a lot of compliments on the show too.”