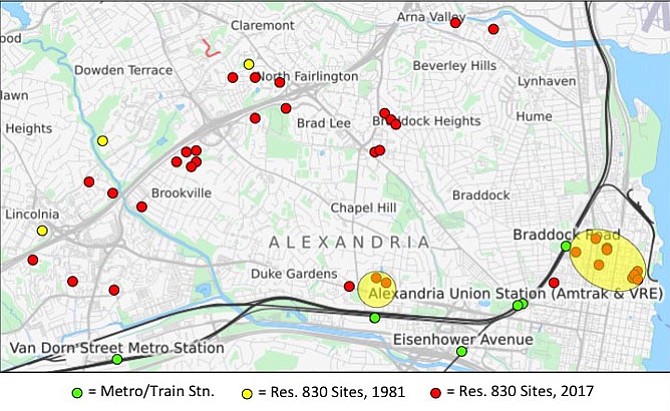 In keeping with a nationwide policy trend, “the City and the Alexandria Redevelopment and Housing Authority (ARHA) have long endorsed [poverty] deconcentration.” This has entailed both “scattering public housing throughout the City” and redeveloping “mixed-income housing” in place of public housing. That’s according to the Braddock Metro Neighborhood Plan (BMNP), which guides the redevelopment of an Old Town neighborhood that has historically included four public housing communities: part of James Bland, Ramsey Homes, Andrew Adkins and Samuel Madden. With the exception of the already redeveloped Bland, these sites comprise over half of ARHA’s slated redevelopment. The policy also relates to the imminent revamping of Resolution 830, a city-ARHA agreement to replace demolished public housing units one-for-one. Deconcentration citywide has occurred under Resolution 830 since the 1980s. (See graphic.)

The present logic is twofold. First, to offset dwindling federal subsidies, ARHA wants to generate funds by selling land — particularly valuable property in Old Town — and redeveloping higher-rent units. Second, the city and ARHA present deconcentration as a social good. The BMNP says: “Mixed-income housing produces physical, economic, and social benefits … making better communities for everyone.” Likewise, the Braddock East Master Plan (BEMP), a companion to the BMNP, intends to be “sensitive to the interests of the residents of the public housing that has been in the area for generations.” This includes “expand[ing] their education and job opportunities” by integrating them into “social network[s] with residents of higher education and/or incomes.”

Many of these assertions about social benefits — particularly to what extent they accrue to lower-income people — are not empirically validated.

Measuring success would require a “longitudinal look,” which the city has not undertaken, said Helen McIlvaine, the city’s housing director.

Other than anecdotally, ARHA has “not tracked … the socioeconomic impacts” and has “not empirically studied where people go,” according to Rose Boyd, an ARHA spokeswoman.

Policymakers rely instead on data indicators for “the community as a whole” and on feedback through the budget and development processes, according to Craig Fifer, a city spokesman. Neither indicates cause for concern, he said.

“Few studies have been completed on the economic, social, or other aspects of dispersal programs or mixed-income housing, and these offer mixed results at best,” wrote housing expert Alex Schwartz in his 2015 book “Housing Policy in the United States.”

“Part of the unknown is that the research hasn’t caught up with what policy is doing. So we’re just kind of going off the assumption … But whether it truly is benefiting and how it’s benefiting people who are low-income is really unknown,” said Derek Hyra, a researcher at American University and a former ARHA commissioner, speaking generally. “We do know — I’ll tell you what is clear — it is benefiting cities because they are garnering a higher tax base. … We can also say definitively it’s benefiting real estate developers.”

Echoing this, the BMNP says: “Property owners within several blocks of transformed public housing sites benefit from significant increases in property values. Cities in turn benefit from the increased property taxes”. Further, the policy has “definitely attracted investment to the city, which the city also needs,” said McIlvaine.

For those displaced, “Families feel safer and in most places they report greater satisfaction with their new housing. But there are conspicuously no benefits in employment, income, welfare dependence, or physical health,” wrote housing expert Edward Goetz in his 2013 book “New Deal Ruins.”

Susan Popkin, a housing expert at Urban Institute in Washington, D.C., says that replacing “distressed” housing generally reduces crime and sometimes spurs economic growth in the surrounding area. But “what it hasn’t done is … to help people move toward self-sufficiency and dramatically change lives… It didn’t have any effect that we can discern on employment or on kids’ educational outcomes.” Nor has the “theory” proven correct that mixed-income environments would help lower-income residents “get connections to jobs and learn better norms … What has happened is that people end up in a safer community that has nicer amenities. But the public housing residents and the higher-income residents tend to live very separately and in fact sometimes have a lot of conflict.”

In his 2017 book “Race, Class, and Politics in the Cappuccino City,” Hyra said: “evidence suggests that long-standing residents withdraw from public participation in gentrifying neighborhoods” — a phenomenon he calls “political displacement.”

Goetz wrote that many displaced people “report significant disruptions in their networks of social support,” as well as “less-supportive social relationships in their new neighborhoods.”

The BMNP says it intends redevelopments to “sustain a critical mass of public housing residents in order to maintain the strong social and support networks that are essential in low-income communities.” But presently “the only basis for the critical mass is the [economic] sustainability of operations,” said Priest and Connie Staudinger, ARHA’s chief development officer, in a July 10 statement.

Poverty concentration can be a fuzzy term. Popkin says it means a census tract in which 30 percent of more of people live below the poverty level. Hyra said that “neighborhood effects” — “higher rates of ill outcomes: school dropout, teen pregnancy, poor health, crime” — occur when the figure is 40 percent. Certain local data corroborate this correlation. Violent, sexual and drug-related crimes over the past six months occurred predominantly in the West End, Arlandria, and northeast Old Town, according to LexisNexis’ Community Crime Map. The Department of Community and Human Services (DCHS) also serves clientele located heavily in these areas, according to a February report. These areas generally coincide with tracts where poverty is highest and income lowest.

Still, even at the upper limit of the statistical margin of error, no tract in Alexandria met the 40 percent threshold, and only one — Arlandria — met the 30 percent threshold. At the lower limit, no tract met either threshold. That’s according to the Census Bureau’s American Community Survey (ACS) for the period 2011-15, the latest for which data is available. Alexandria’s public housing communities are also much smaller than huge metropolitan projects — such as Chicago’s Cabrini-Green, a paradigm for the social ills of concentrated poverty. Cabrini-Green comprised more than 3,600 units, many in high-rises; ARHA’s sites range in size from 4-170 units, with a median of 38 units.

Redevelopment that disperses low-income housing from the Braddock Metro Neighborhood may contribute to shrinking that neighborhood’s diversity. ARHA’s public housing tenants are 95 percent minority (86 percent non-Hispanic black) and 5 percent non-Hispanic white, according to HUD’s 2016 “A Picture of Subsidized Households” survey, the most recent for which data is available. But in the coinciding census tract, while the total population did not significantly change from 2005-09 to 2011-15, the non-Hispanic white and black sub-populations significantly increased and decreased.

Whereas deconcentration may previously have served to counteract racial segregation, “What used to be the wrong side of the tracks is now transit-oriented development, it’s the best place to be. … We’re seeing change occurring at a very quick pace,” said McIlvaine. “And we haven’t measured it, I guess we could say that; we haven’t looked at it in some of these ways.”