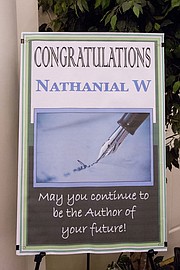 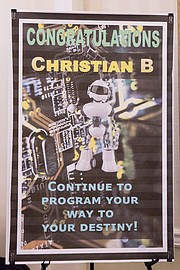 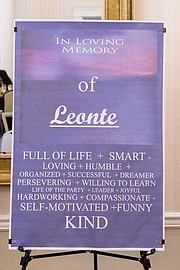 Wells + Associates has been working with the county for 15 years and, for the past four, they have designed and printed the posters celebrating each graduate at the annual graduation.

The room at the Waterford in Springfield, buzzes with happy chatter over a low mix of upbeat tunes. Framing the space are posters that celebrate the uniqueness of each graduate.

For the young people in this room, children who were removed from their biological families due to a range of abuse and neglect and moved between foster and group homes, the challenges that stood between them and a diploma were significant.

Graduation rates for children raised in foster care are 49.6 percent less than the national average and the statistics on college graduates are even lower. Having a high school diploma significantly increases the range of job opportunities and earning potential.

“Instead of giving up, you continued to move forward. In spite of all you have been through, you achieved this milestone. Because of your hard work and the support of people both in-and outside of this room, we are able to be here to celebrate you.” The room cheered at the words of Chauncey Strong, foster care and adoption supervisor.

The event, planned by Natalie Sposato, Fairfax County Department of Family Services, life skills coordinator, is intended to keep this milestone from going unnoticed. “A high school diploma can never be taken away. It’s something that should be acknowledged and celebrated,” said Sposato. Together with the support of the Department of Family Services staff and members of the community, the event included a buffet, giveaways, certificates and speeches. And, at every opportunity, the proceedings were paused to give all of the graduates one more big cheer.

TWO SPEAKERS, young adults whose childhoods mirrored those of the new grads, encouraged that this is just the beginning.

Cordelia Cranshaw, a foster children advocate, motivational speaker, licensed graduate social worker and foster care alum, told the recent graduates that education had been the key to her own success. She encouraged the new grads to be their own advocates and reminded social work professionals to listen to their charges and to remember that the life they are trying to influence, is not their own.

Dionte Fitts, assistant manager at Jersey Mike’s in Leesburg and foster care alumni, encouraged the new grads to dig down to discover what makes them happy so that they can find their own destiny. To succeed, he advised, they must believe in themselves and not give up. He told them to remember that being in foster care isn’t their fault.

Nine graduates were celebrated in person, each toasted by a member of their social work team and given an opportunity to say a few words. There was clapping, cheering and even some tears. Adults expressed pride in their young charges’ accomplishments and the young adults, both shyly and exuberantly, showed their own pride in themselves and appreciation for the support they had received from the support group represented in the room.

Nathanial (Nate) Walters of Alexandria, tossed aside the microphone, his self-confidence and sense of humor carrying across the room. Walters told the crowd, which included his mom, that when his father died and his mother couldn’t meet his needs, he ended up in foster care. Older now, he has spent time in “independent living” and has learned the hard way what happens when you don’t manage your money carefully. He advised the crowd that they should avoid what he called the “rice diet” that has, at times, had to be his staple.

He talked about hanging out at a local teen center, where he noticed that none of the other youths ever helped the woman who manned the front desk. When she needed help, he began to help her. And when she learned of his graduation from high school, she had a card for him, in it was $20 and a note wishing him good luck. She made sure he understood that she doesn’t give money away lightly, even to family members. Walters really needed that money. Without it, he would not have been able to get to work. “She loved me,” Walters said, “She helped me.” He says he is thankful for his trials, because they have made him who he is today.

Christian Basubi, now a college student at George Washington University, shared that foster care was “the most wonderful thing that had ever happened [to him].” When he was initially placed in care, he was new to this country and learning English as a second language. Everyone he met in his ESL classes was an adult, not a peer.

He expressed his appreciation for all of the support he has received while in care and particularly to have been part of Fairfax Families4kids, a county mentoring program, which provided him with a supportive community of youths and mentors with whom he could spend time on those lonely weekends. “It wasn’t easy,” said Basubi. “It’s still not easy. But I’m doing it little by little. I know I will get somewhere.”

Wells + Associates has been working with the county for 15 years and for the past four, they have designed and printed the posters celebrating each graduate at the annual graduation. Wells considers its partnership with the county to be part of its corporate responsibility. “We recognize that it takes a village and as a member of the community, we believe it’s our job to be part of that village,” said Melissa (Missy) Jackson.

FOR SOME, the graduation was another sad reminder of a young life violently cut short earlier this month. Mentors, social work staff and members of his family, including his twin brother, gathered to celebrate Leonte, who aged out of foster care several years ago. Leonte was determined to earn his high school diploma and graduated last February at 23-years-old. He was slated to be one of the speakers at the day’s event.

Leonte is described as having been a kind, loving and compassionate young man. As a little boy, his smile lit up the room and his dance moves were legendary. His death serves as a stark reminder that the challenges for children who grow up in foster care don’t end when they age out into young adulthood.

If interested in making a difference in the life of a child in foster care and after they age out, consider becoming a Court Appointed Special Advocate (CASA) or becoming a mentor with Fairfax Families4Kids.

Joan Brady is a professional photographer; award-winning columnist; co-owner of Spirited Media, Inc., mentor and advocate for current and former foster children; a volunteer with paws4people and others; and a resident of Great Falls. Reach her at joan@joanbradyphotography.com