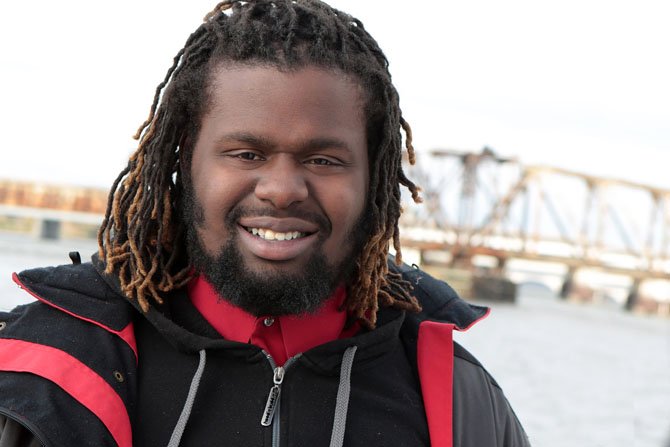 2013: Tyrell was living precariously, without prospects for a better future. Photo by Joan Brady 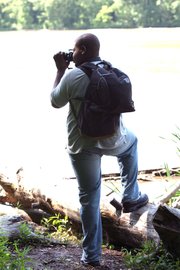 Tyrell, a resident of Fairfax County, was once among the 500,000 kids who are in foster care across the United States.

Fairfax County — Imagine if in your childhood, it was normal for a social worker to show up unexpectedly, hand you a big black garbage bag and tell you to pack your things.

That’s what happened to Tyrell in the first quarter of his senior year of high school. Left behind were Tyrell's friends, the football and wrestling teams he had played on and the security he had finally found after nine years in foster care.

Tyrell, a resident of Fairfax County, was once among the 500,000 kids who are in foster care across the United States.

He struggled to earn his high school diploma in his new school but succeeded, thanks in part to a mentor from Fairfax Families4Kids. Earning that high-school diploma put Tyrell ahead of more than 50 percent of kids who have been in foster care, according to a report by the Association of Small Foundations/Annie E. Casey Foundation.

In Fairfax County, foster kids can choose to stay in foster care until they are 21, rather than aging out at 18. The extra years of services come with requirements that are designed to prepare kids for adulthood. They must go to school and/or work as well as get therapeutic support, if needed.

Imagine young adults who, in many cases in foster care, were housed more than they were raised. Kids whose caregivers did not work to instill ambition, confidence, self-esteem, work ethic or core social skills. What are their chances for becoming self-reliant?

Many former foster children can’t meet the requirements to stay in the system, and even the young adults I know who made it through until 21 did not gain the skills needed to be successful.

NOW 22, TYRELL IS one of the 26,000 young adults who age out of the foster care system each year in the U.S. without family and the emotional and economic support that often come with family. In Fairfax County in 2012, 49 foster children "aged out."

Despite his winning smile, good nature and potential, Tyrell was living precariously. He has been essentially homeless. Alternating between the couches of friends and not having a place to sleep, there have been times when Tyrell stayed on the bus, where it was warm, until it stopped running at 3 a.m. Then he would head to an all-night McDonald’s where he would hope that the manager didn’t kick him out.

Mentors and other adults tried to support Tyrell, both emotionally and materially, by paying his phone bill and providing him with leads on jobs. But it just wasn’t enough. He never followed through on the job leads. He really didn’t know how to. Nothing changed.

Like the social workers before them, these well-meaning adults, myself included, became frustrated. For an adult who was raised with caring parents, it was mind-boggling. How could he not make one single phone call to help himself? Why didn’t he see that he had to step up in order to change his life? This was a kid who we believed in. Why couldn’t he believe in himself?

But Tyrell represents so many young adults who have grown up in the system. They are focused on what is right in front of them: food and shelter. Multi-step planning, which is required to get a job, is impossible. They don’t trust. They have seen only failure, despite their potential. Their expectations are low. Their dreams don’t exist.

They are lacking that one person who is pivotal to success: the full-time, caring motivator, the person who is on them, as emerging adults, every waking minute to get out of bed, to follow up on job leads, to never give up.

I was working to develop a plan for Tyrell and others that would incorporate this "caring motivator," that could include housing and maybe even employment, when Kyria Henry, co-founder of paws4people.org, contacted me with an idea.

The non-profit that Kyria Henry founded with her parents, paws4people.org, has a mission to enhance the lives of those living with serious illnesses or disabilities by utilizing highly trained assistance dogs for children, veterans and civilians. The bulk of the dog training is done in prisons by inmates.

I’ve been volunteering with the group for more than four years and have seen firsthand the magic that happens when you bring together dogs and people with emotional and physical needs. Many lives have been forever changed by the role paws4people plays.

Kyria’s proposal had the right ingredients to create success. The program frees participants from the stresses of seeking shelter and job and allows them to move into a structured, caring environment. These emerging adults have stability inside a supportive community comprised of staff, volunteers, students, clients and the dogs themselves. They learn marketable skills, among them dog grooming, care and training as well as facility maintenance skills. And the boss takes on the all-important role of the full-time, caring motivator.

I knew the perfect candidate. Tyrell said he was ready to get his life on track. He agreed that if he was offered the job and was accepted into the program, he would leave friends and family behind here to move to Wilmington, N.C. for the three-month pilot program.

The first hurdle was getting him down to Wilmington for his interview.

Tyrell was more than three hours late to meet me for the six-hour drive. I bit back my frustration and told him that, if he was accepted, being on time was a something they would help him with.

I knew he could do this. He had to believe it too.

At the end of a 10-hour interview, Tyrell was offered the one place in the pilot program. He was shyly pleased.

On the drive home, he started to worry. But if he wanted this chance to change his life, he was just going to have to close his eyes and leap. I reassured him that while I didn’t expect it, if something terrible happened, I could be there in six hours.

There were two weeks between that day and the day I drove him to North Carolina to start his new life. We were in constant communication, talking through the what-ifs, me constantly reassuring him that he could do it. And he reminded himself that only the pilot had been funded, it was only three months.

TWO DAYS BEFORE we were to drive down to Wilmington, I got a text from Tyrell. He couldn’t do it, he wrote. He wasn’t going to go. He couldn’t leave his friends.

My heart fell. The statistics were already against him. He had to really want this in order for him to have a chance of succeeding. In my opinion, this pilot program would give him the best chance of having a successful life. We had texted for about 15 minutes when he texted, "I new I would get u. Haha. U fell for it. See you at 10:30am on Saturday." Another hurdle in a stadium’s worth of hurdles had been cleared.

Remembering the three-hour wait before our last trip, I was prepared for him to be late on moving day. But instead, Tyrell called me in advance of our pick-up time to be sure I was on my way. Another hurdle cleared.

The kids I have watched grow up in the foster care system are in now prison, living on the street and/or are parents. There are very few success stories. I firmly believe that the many young adults who have been let down by both their families and the foster care system can succeed if given the right opportunity. These were once babies who entered the world expecting to be loved, taken care of and supported. They didn’t get those things as children. They deserve the opportunity to get them now. Nothing about this is easy. It will take commitment, caring support and not giving up.

Tyrell texted me after I left him at the extended stay hotel which would be his home for the next three months, "I am going to do my best to complete the program. [This] is what I’m starving for. I know it’ll all work out for me. I just have to leave everything in the past and I will be ok."

Paws4potential isn’t going to be the right fit for everyone, but I believe that Paws4people.org is on the right track to change outcomes for kids who have aged out of foster care and others similarly at risk.

According to a study by the Jim Casey Youth Initiative, every person who gets their life on track, saves society an average adult lifetime cost of $300,000. And, more importantly, getting ex-foster kids successfully launched makes for a better society and a better world.

If you are interested in finding out more and/or would like to help turn this pilot into a long-term program, please contact me at joan@joanbradyphotography.com. Or go to paws4people.org and click on the paws4potential program page.

Joan Brady is a professional photographer; mentor and advocate for current and former foster children; volunteer with Paws4People, Fairfax Families4Kids, and others; and a resident of Great Falls. Reach her at joan@joanbradyphotography.com