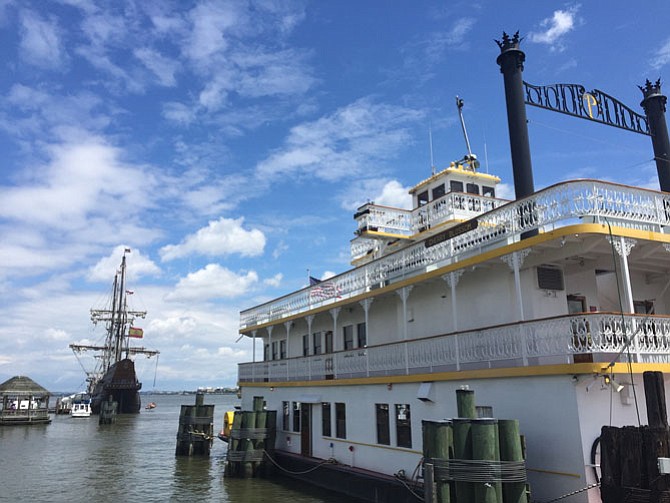 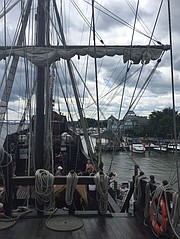 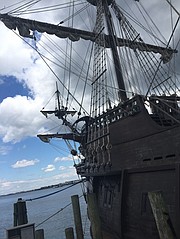 For the crew of El Galeón, there is one moment that is universally loved. Usually the ship, a re-creation of a Spanish Galeón, is still powered with a motor. But sometimes, in the right waters with the right weather conditions, Communications Officer Bosco Bueno Adorna says the crew gets to cut off the engines and unfurl the sails. The winds carry El Galeón out to open waters, and the crew is transported 400 years into the past.

The ship had sailed into Alexandria for a weekend last November and made one last visit the last weekend of May before eventually heading home.

One year and two months ago, when Adorna first joined the crew, he said he knew virtually nothing about sailing.

“When I first started working around the deck it was like a chicken without a head,” said Adorna. “It’s a hard life.”

Adorna says the crew all live in a cabin together and share bunkbeds. Some of the hardest parts of the journey can be when the ship is sailing in rough waters. El Galeón does not have a keel, so the ship rolls around in stormy seas. But the worst, according to Adorna and other members of the crew, is having to work in the engine room. The room is cramped and burning hot.

“But now, it’s normal,” said Adorna. “It’s all in your head. You just have to stay chill.”

And for Adorna, the hardships of life at sea are far outweighed by moments like the ship sails catching the wind and looking down into the crystal blue waters to see dolphins swimming alongside the ship.

Adorna says he hates having to climb to the top of the sails, but for sailor Maria Jose, it’s one of her favorite parts.

“I love to climb up to use the sails,” said Jose. “You can go all the way to the very top of the masts.”

Jose came to the ship with a background in sailing. She’d worked on a variety of smaller boats before arriving on El Galeón four months ago. Like Adorna, she says her least favorite part is the engine room, and she loves when they can power down the motor and just travel with open sails.

Around 10:30 p.m. on May 30, El Galeón set sail out of Alexandria. The ship is heading up the east coast towards Baltimore, then down to Norfolk for a tall ship festival. El Galeón will spend the rest of its summer in Ocean City to do repairs, then is headed back to Spain after a four-year trip in the United States. Adorna said there are three other Spanish tall ships like El Galeón and they are all headed home to celebrate the launch of the Santa Maria, the flagship of Christopher Columbus’ expedition.