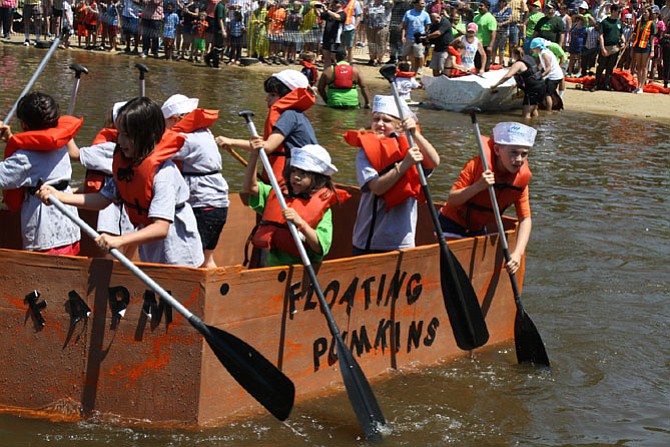 The floating pumpkins are on their way out to sea at Lake Accotink. Photo by Mike Salmon.

Springfield — June is the month for community celebrations, but there’s hardly an activity 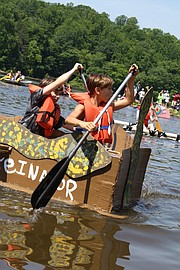 The anaconda-themed “Snakeinator,” made it back to the beach, and the sailors kept dry.

around the County like the Cardboard Boat Regatta, capping off the Springfield Days celebration on June 3-4. The beachhead at Lake Accotink was lined with the homemade boats which were mostly decorated under the loose theme of Fairfax County’s 275th birthday.

Various groups were entered into the race, including the county’s School Aged Child Care (SACC) teams that got out the duct tape, cardboard and historic ideas as they crafted their boats. This included the Knicker Bocker boat, named after the famous 1922 snowstorm, or the 29 Diner boat named after a diner that’s been in Fairfax for 70 years, or the Celebrate Fairfax boat from Union Mill Elementary school in Centreville that had a ferris wheel in the middle. “We’re celebrating the 275th anniversary,” said the parent who helped build the Union Mill boat.

Most of the crews were decked out in sailor hats of some sort, except the 29 Diner boat, who had authentic paper chef hats that the new owner John

The floating pumpkins are on their way out to sea at Lake Accotink.

Wood found when he took over the diner three years ago.

Then there were ballet dancers Melanie Becker, 13, and Anastasia Shafer, 13, who were ballerinas for the Nutcracker production this past holiday season at the Virginia Ballet Company in Fairfax. Their boat was sound, but just in case “we have our bathing suits underneath,” the ballet costumes, said Becker.

Sharon Bulova, the Chairman of the Fairfax County Board of Supervisor’s, was on hand to sound the buzzer for the first race. “I love this race, my absolute favorite,” she said. “This is the best activity for the SACC program, they do research and engineer how to build something that will float,” she said.

When the races started, there was lots of cheering, paddling and swimming by the contestants, proving that there is never too much duct tape when

Sharon Bulova, Chairman of the Fairfax County Board of Supervisors, launched the first race at Lake Accotink.

trying to get a cardboard boat to float. The ballerinas from the Nutcracker were successful, even when the boat appeared to be heading out to sea after passing the buoy to turn around, and they came in second for their heat. “We came up with a strategy beforehand,” said Shafer. The “Unsinkable,” from Alexandria and Columbia, Md., had a motto of their own. “Good edges, good seams and good friends,” said Charlotte Granahan, 14.

Other Springfield Days activities for the weekend included a crafts fair in at the Springfield United Methodist Church, a 5K fun run, a petfest and a car show the day before.

“It’s bringing the businesses, the civic groups and residents together,” said Nancy jo Manney, the Greater Springfield Chamber of Commerce executive director. At one time, Springfield Days was a bigger event, with a Miss Springfield beauty pageant and a carnival in the parking lot of Springfield Plaza or then Springfield Mall, but economics may have played a factor in planning those activities. “It gets harder and harder for the shopping centers to give up parking spaces,” Manney said.

Click here to see more pictures of the festival.