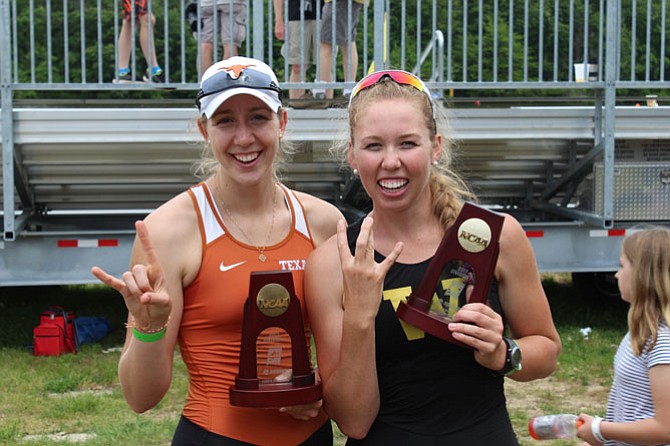 Rebecca Gehring and Brooke Pierson at the 2017 NCAA Championship

By By Lauryn A Overhultz

Mount Vernon — Brooke Pierson and Rebecca Gehring both helped lead their teams to the podium in the Division I NCAA women’s rowing championship. From rowing at West Potomac High School to going their separate ways in college, the girls have kept their bond formed here strong.

Both girls began their rowing careers at West Potomac high school, although the beginning of their time rowing looked very different. Gehring began rowing as a freshman at West Potomac. She moved to Alexandria that same year from Japan and was looking for a team sport to become involved in.

“I really liked the team atmosphere once I started my first winter training so that is what really drew me in and just being on the water every day,” Gehring said. “It’s different than any other sport, you don’t really get to go on the Potomac every day.”

Pierson began rowing three years later when she moved to Alexandria for her senior year of high school. Gehring recruited Pierson to row for the high school at the school’s orientation.

“She picked me out and said you need to try out for rowing,” Pierson said.

Pierson said she was really lost when it came to rowing and that Gehring taught her all of the basics during the first year at West Potomac.

“We got to winter training and spring training and Rebecca was just there and was so helpful,” Pierson said. “She just really taught me the sport of rowing.”

These women have made accomplishments in their rowing careers since graduating from West Potomac High School. Gehring’s team is the first University of Texas team and the first team from the Big XII to make it to the podium at the championship.

Pierson and the University of Washington team were far ahead of any of the other opponents throughout the entire weekend leaving the last race and first place finish easy for them.

“I think that what Washington has done is raise the bar because no other team has swept all three events. So for us it was amazing because we were able to raise the bar with them because we made it on the podium with them,” Gehring said.

The girls have not gotten this far without the support of their family. Scott Gehring and Randy Pierson have both been involved since the beginning and were amazed at how far both girls have come over the years.

“To see Brooke and Rebecca there was quite an accomplishment knowing that they both started rowing together in high school,” Scott Gehring said.

They have watched their daughters grow through the sport and know exactly what kind of teammates they are.

“Brooke is constantly OK despite the pressure,” Randy Pierson said.

According to Randy Pierson, Brooke is the kind of person who doesn’t believe that she will not succeed.

“She doesn’t seem to recognize this and just keeps on pressing forward,” Randy Pierson said.

Scott Gehring said that Rebecca’s best quality is her persistence which shows in everything she does. Rebecca is always looking to better herself and be the best.

“It seems like every milestone she sets and then reaches that and sets the next milestone and continues to get better,” Scott Gehring said.

It’s not over for this duo just yet though. Both women still have one more year of eligibility in the NCAA.