‘I Moved Here and It’s Been Life-Changing’
Votes

‘I Moved Here and It’s Been Life-Changing’ 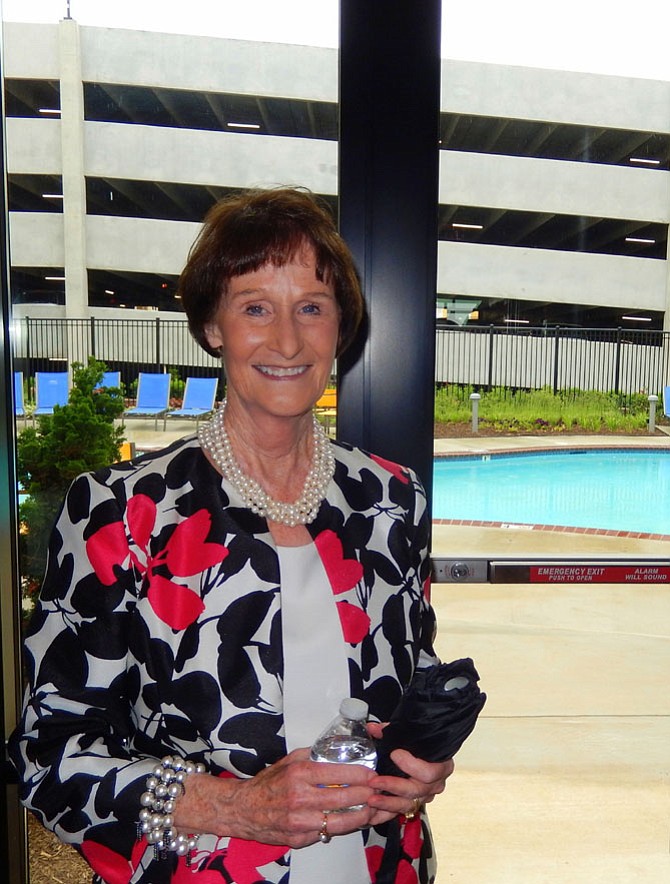 With the pool in the background, Sharon Bulova stands in the building’s club room. Photo by Bonnie Hobbs.

Dignitaries and stakeholders cut the ribbon for Residences at the Government Center’s official grand opening. 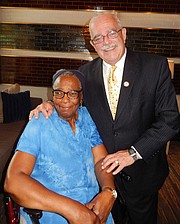 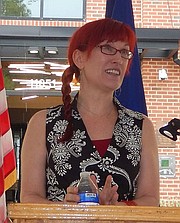 Dignitaries and VIPs were all smiles last week when they cut the ribbon for the official grand opening of Residences at the Government Center. A 270-unit apartment complex in Fair Oaks, it provides workforce housing for people who otherwise couldn’t afford to live in Fairfax County.

But perhaps no one was happier than Dawne Sherman, a mental-health counselor who works for the county and just moved into an efficiency apartment there. She doesn’t make anywhere near the average median income (AMI) for county residents – which, in 2015, was $113,208 – but she now has a place of her own.

“I moved here six weeks ago and it’s been life-changing,” she said. “In the two years before, I lived with my parents — and I’m a grown woman. I have a tough job and my pay is pretty modest. But now, I have a 540-square-foot studio apartment and I love it. It has everything, and I’m truly grateful. I come home after a long, stressful day at work and don’t have a long commute. I have a beautiful and green place to live, here in the county.”

What sets the Residences apart from other apartment complexes is the special financing structure that made its construction possible, as well as its lower-than-average rents. It’s geared specifically for those making 50-60 percent of the county AMI, such as teachers, public-safety personnel and service-industry employees. This equates to about $44,000 for a family of two, at or below 50-percent AMI, and $53,000 for that same family, earning up to 60-percent AMI.

So, said county Board of Supervisors Chairman Sharon Bulova, “It’s pretty affordable for someone raising a family and with a lower income. This is beautiful, inside and out, and is a very innovative way of providing housing this affordable for folks in the workforce.”

Bernice Dolberry, the first person to move into the Residences, is also delighted about it because she needs help getting around and her apartment is accessible. “I have a scooter, a walker and a cane, and I can ride my scooter into my house,” she said. “This is accessible for me in the bathroom, the kitchen cabinets are lower and the stove controls are in the front, so I can reach them.”

The four-story, smoke-free, environmentally friendly apartments were also built to EarthCraft standards for sustainable and energy-efficient living. They’re on some nine acres along Monument Drive, on the county Government Center’s perimeter, and back up to woods.

Besides being across from the Fairfax Corner shopping center, the complex’s amenities include an outdoor pool, tot lot, fitness center, outdoor lounge with grilling area, clubroom with Wi-Fi and billiards, community room with couches and a smart TV, business center, parking garage and connections to trails.

Paradigm Construction Co. was the general contractor, and last Monday’s (June 5) official grand opening came two years after the project’s groundbreaking. But it only reached fruition because of cooperation among a variety of entities.

The project’s developer, Jefferson Apartment Group, was able to lease the land from the county, and federal low-income tax credits were obtained. A public-private partnership was formed between the county, its Redevelopment and Housing Authority (FCRHA), Jefferson, and Stratford Capital Group. In June 2014, it became the first project of its kind in Virginia to structure its financing via a combination of both 9-percent and 4-percent tax-credit allocations from the Virginia Housing Development Authority (VHDA), plus tax-exempt bonds from the FCRHA and other financing sources.

“Not doing this through tax dollars is a creative mechanism for making housing available,” said Bulova. “This was built with $13 million in tax-exempt bonds at no cost to local residents. And because it’s privately owned, it’ll generate tax revenue for the county.”

Also pleased with the building’s appearance, she said, “You can’t really tell it’s affordable housing because it’s attractive and blends into the surrounding community. And the county and developer also did a wonderful job of preserving the wooded area. It’s a place where people want to live and live next to.”

Noting that many people who work in the county currently have long commutes from elsewhere to and from their jobs, Bulova said, “This has been a long time coming for those who want to live and work in Fairfax County. Young people, entry-level professionals and low-income individuals can now live near where they work.”

Jefferson will manage and maintain the complex, but the county will have oversight, since it owns the property. And Bulova said she hopes the county can do partnership-projects similar to this one in the future. “Fairfax County is a leader in finding creative ways to leverage our resources,” she said. “This will serve as a model and exemplify smart growth, going forward.”

“When I became Board of Supervisors chairman in 2003, we made affordable housing our priority,” he said. “We dedicated one penny from the tax rate — nearly $171 million between FY 2006 and FY 2016 — to affordable housing.” He also supported the Residences and praised the work of Paula Sampson, then head of Housing and Community Development for the county, and her team, in making it a reality. After all, said Connolly, “Affordable housing is a practical matter and also a matter of our values as a community.”

At the federal level, he said, the president’s budget would eliminate programs to prevent homelessness and tax credits for affordable housing. “We’re going to fight those efforts in Congress,” said Connolly. “But meanwhile, Fairfax is a model for the rest of the country. Since 2004, we’re the only jurisdiction in Metropolitan Washington, D.C., that’s reduced its homeless population by 40 percent.”

Supervisor John Cook (R-Braddock), who also helped move this project forward, called affordable housing “probably the most vexing problem facing local governments. By partnering, we were able to get it done, and it’s a pleasure to have it in my district.”

“We’ve been waiting a long time [for this],” said Supervisor Cathy Hudgins (D-Hunter Mill), on the county’s committee to Prevent and End Homelessness. “But it would take 31,360 more affordable units to be built before everyone within this AMI could move into affordable housing. We’re losing workers and businesses because people can’t afford to live here.” She then urged residents to participate in the county’s Strategic Housing Plan “so they’ll understand and support addressing this need.”

Steve Wilson, president of Stratford Capital, one of the project’s development partners, said its financial structure benefited everyone. “A 2015 GMU study said that, between 2011-23, about 60,000 lower-income households will move into Northern Virginia — and 30,000 of them will be renters,” he said. With such a great need then for affordable housing, he added, “Only 18 out of 270 units are left at the Residences. That’s about 2-1/2 times the normal, absorption rate, so the pent-up demand for this type of housing is significant.”

Greg Lamb, Jefferson’s executive vice president, said his firm normally builds market-rate housing. “We were selected for this in 2008 and then the recession happened,” he said. “But the county didn’t give up, and we were so grateful to be one of the partners.”

“This project was complicated, but Paradigm Construction didn’t cut any corners, did a beautiful job and built a quality project,” he continued. “We’re very proud and look forward to being property owners here for a long time.”