Sharing thoughts on communicating to each other. 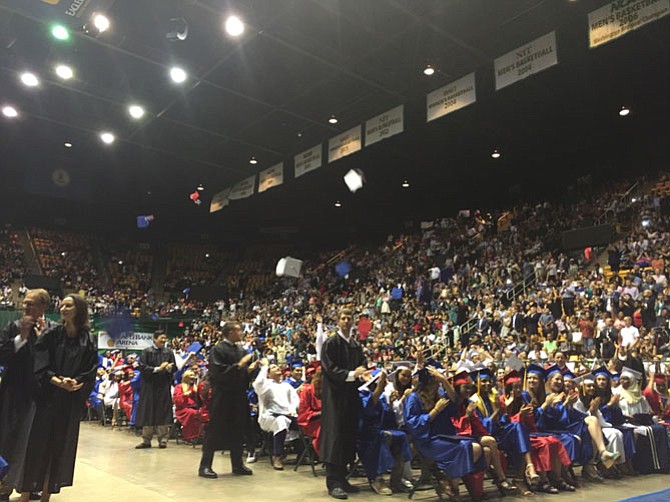 Alexandria — How do you say what you mean when words don’t come easily to you? One of the major themes

Katie Murphy (center) with her family. Murphy will attend Notre Dame and study finance. Looking back at the last few years of school, Murphy said some of her favorite times were with the crew team as they went to the state championships. “It was a lot of hard work,” said Murphy, “but it feels incredible.”

of the T.C. Williams High School graduation in 2017 was finding new ways to communicate. For the two recipients of the Principal’s Awards, their experience was in overcoming hardships to express themselves and help others do the same.

For the 720 graduates, the June 17 graduation in the EagleBank Arena at George Mason University was a chance to say goodbye to their school and to each other.

For students with disabilities, one or the biggest struggles can be finding the right words to express themselves. Da’Quon Henderson, one of the class of 2017 graduates and male recipient of the Principal’s Award, created an app called Worducation. The app helps students with disabilities communicate with their classmates. Henderson presented the app to the School Board and received permission to use it with fellow students at T.C. Williams. Henderson developed a business plan which won him first place in his class Business Plan Presentation then as a top finalist in the region, representing Washington D.C. at the National Business Plan competition in New York. Henderson was named Washington D.C.’s Regional Youth Entrepreneur of the Year by the Network for Teacher Entrepreneurship.

For Sugevis Gomez, the female recipient of the Principal’s Award, the award and graduation

From left are Jim Benbow, Eileen Wallace, Ava Benbow, and Ella Benbow. Ella Benbow will be going to William and Mary to study math and education, inspired by a series of math teachers she had throughout middle and high school. “It’s surreal,” said Ella Benbow. “I can’t believe it. I thought I was going to be in ACPS forever.”

represented a long road from her arrival to ACPS. Gomez joined ACPS at the age of 11 knowing no English. Now, Gomez has been accepted to Georgetown University to study foreign policy in the fall.

The graduation was a final farewell for two ACPS administrators. Principal Jesse Dingle and Superintendent Alvin Crawley will both be leaving ACPS over the summer. Crawley, who is leaving to take a graduate teaching position at George Mason University, has been superintendent of ACPS for the last four years and noted that this graduating class were the high school freshmen his first year here. Crawley expressed pride in how he’d seen the class of 2017 grow and encouraged them to be confident in the next steps of their journey.

For Dingle, one of the hardest feelings to convey is goodbye. After two years as principal of T.C. Williams High School, Dingle will be returning home to North Carolina. Rather than give another graduation speech, Dingle decided to leave his students with a song sung together with Tarenthia Harris: “Time to say goodbye my friend, it’s time for something new. All good things must someday end, it’s sad to say but true… I want to tell you how I feel but words are hard to say, I only hope you know what’s really in my mind.”