Class of 2016 Graduation marks the school’s 50th anniversary and the end of Principal Dingle’s first year. 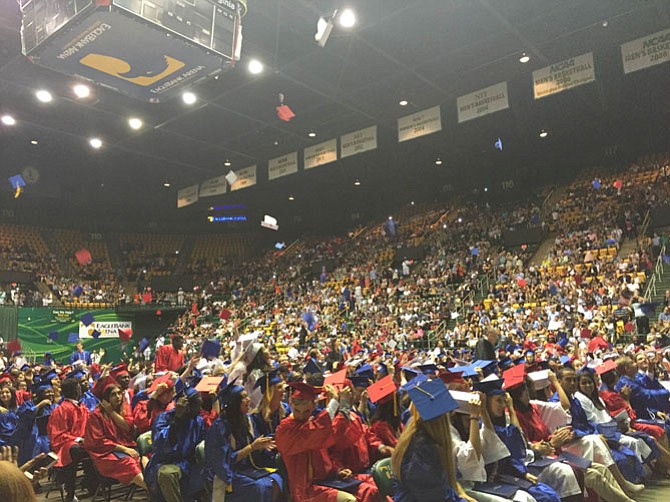 T.C. students throw their caps into the air at graduation Photo by Vernon Miles.

According to Principal Dr. Jesse Dingle, life at T.C. Williams High School is a kaleidoscope. It’s constantly moving and shifting, full of every imaginable form of diversity. Dingle described the days at the school as fast paced, with faculty and students darting from class to class, administrators like Dingle stopping in, and a variety of guest speakers coming and going from the school. It’s a year of organized chaos that culminated last Saturday in the class of 2016’s graduation.

Six hundred and sixty-seven students graduated from T.C. Williams on June 18 at a packed ceremony in George Mason University’s Eaglebank Arena, representing 92 percent of the senior class. Thirty-six more students will be eligible to graduate over the summer. The class of 2016 also marked the 50th class to graduate from T.C. Williams High School.

While the graduations don’t normally have commencement speakers, to mark the 50th anniversary, U.S. Secretary of Education John B. King Jr. spoke to the graduating class and laid out the challenges facing them after their graduation.

“We need to keep building that ‘more perfect union,’ for ourselves and our neighbors,” said King. “We need to heal the heartbreak in places like Ferguson, Baltimore, and Flint, and end the injustices that cause these tragedies. We need to fix our broken immigration system, and give DREAMers and their families paths to citizenship. We need to fight poverty and climate change. We need to build strong multi-racial, multi-cultural, multi-lingual communities that celebrate diversity and collaborate to solve big challenges. As T.C. graduates, you are prepared to shape how we confront these issues.”

“I’m so proud, I can’t put it into words,” said Sidrah Hamid. “She guided me and helped me, she was my support system.”

A few rows up, Tim Gray scanned the crowd for his daughter, Jessica Gray. Tim Gray described the moment as one of overwhelming excitement. After his daughter’s freshman year, he recalled her taking a trip with a wilderness program that brought her out to rural Utah, where she camped in the high desert for three months. Tim Gray said the experience was transformative for his daughter, and she ended up with all A’s in her last semester of her senior year. Tim Gray said his daughter wants to study to be a math teacher and benefited from a school program that allowed seniors to go to Hammond Middle School and help teach in classrooms.

“It’s a great experience,” Tim Gray said. “It really taught her about the other side of the classroom.”

Both Khadijah Hamid and Jessica Gray will be attending George Mason University in the fall.

John Dill said his son Leo Bekele’s experience at T.C. was a mix of ups and downs. Bekele not only attended school, but works part time, volunteered, and helped take care of some of his older family members. Dill said he was proud of his son for pushing through the challenges. Bekele will be attending Virginia Commonwealth University to study real estate.

“It’s awesome,” Dill said of the graduation, “The day is finally here.”

For other parents, it was also a day tinged with sorrow. Bennie and Dina Evans accepted a diploma on behalf of their son, Cameron Evans, who committed suicide in 2013 during his sophomore year at the school. As they accepted the degree, the entire graduating class stood and applauded.

“It let me know that my son’s memory is still alive,” said Dina Evans. “He was loved by this community.”

“There’s a lot of anticipation when you come into a new situation, you’re worried about how you’re going to do,” said Dingle. “But it’s gone well. It feels good.”

There’s a few things to finish up before the school year is officially over, but Dingle says he’s already beginning to look back at the ups and downs of his first year.

“When people first found out [that I was going to be the principal], people reached out with support and pride,” said Dingle. “[I was] surprised by the sheer volume of our students. We are the high school of Alexandria. I was used to reading about the international community here, but once you see that diversity, it’s so cool to hear all the different voices and see all the different skin colors come together.”

Dingle said the diversity at the school is one of his favorite things about being there, and says it’s one of the most important ways in which the school prepares students for the real world. But while Dingle cites the school’s diversity as one of its greatest strengths, it has also come with its share of challenges. Over several years, students have complained about a punitive system that seems to target students of color. A contingent within the student population have actively lobbied the Alexandria City Public Schools to implement restorative practices that limit suspensions and other disciplinary actions.

Dingle says the students advocating for a reform to the school’s disciplinary programs have found an ally in him.

“I’m completely on board for restorative practices,” said Dingle. “I never want our students to not be in school. If a child is in school, academically he’s going to do better. But just like anything you want to fully and deeply implement, it takes time, anywhere between two to five years if we want that to become entrenched as a part of your culture. [But students should know,] this principal is truly committed to seeing that happen.”