How to Ease Braddock Road Congestion? 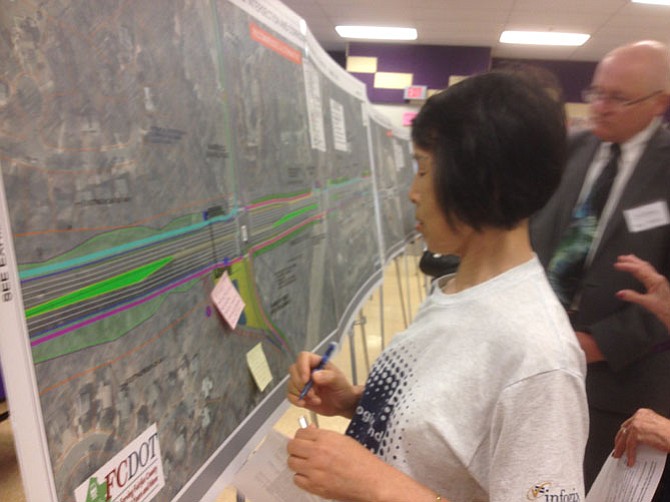 Haiping Luo points out her bus concern on the project boards. Photo by Mike Salmon.

During the meeting, residents of the area wrote concerns on Post-Its and stuck them to the maps.

the traffic on Braddock Road, and that was reflected in the Braddock Road Multimodal Study community information meeting #4, held on June 26 at Lake Braddock Secondary School.

These changes involved bike lanes, crosswalks, bus stop consolidation and a willingness to accept the fact that something needs to be done to reduce the amount of traffic on the road while preserving the way of life for the residents in this part of the county. The stretch of the road included in the study was from Guinea Road to Ravensworth Road inside the beltway. The plan has evolved through the process and now involves an improved crossing at Guinea, on-road bike paths on both sides of Braddock, relocated

The Braddock Road corridor goes from Guinea Road to Ravensworth Road inside the beltway.

bus stops to minimize traffic interruptions, a lighted portion of the Cross County Trail under Braddock, and the use of HAWK signals in a couple of spots. HAWK is an acronym for High-Intensity Activated Crosswalk Signal that is “only used when pedestrians are there,” said Becky May, a landscape design engineer on the project.

THE KINGS PARK Shopping Center is a pivotal point in the corridor, and Jim Sobecke was on the task force formed by Braddock District Supervisor John Cook. He looked at the Grantham and Burke Lake Road as a hot spot. “There’s at least one accident there a day,” he said.

Haiping Luo, a resident of Kings Park for the last 20 years, was worried about the 17G bus that she catches to the Pentagon. By consolidating the

Looking west at the Burke Lake Road intersection, the Kings Park shopping center is a focal point for the new plan.

bus stops, she won’t be able to get the 17G on the side of the street where it is now. “If I wait here, there is no way to get the 17G,” she said, pointing to one of the maps displayed around the room. “My wait time definitely will be longer,” she added. Luo used a Post-It on the map to highlight her concern, a method used at transportation meetings like this to gather resident’s concerns.

Then there’s the transit center issue on a spot behind the shopping center that is better off a park and ride lot, according to some. “This is a difficult issue,” said Cook. The task force did not choose the transit center, priced at $22 million, but the technical team did pick that as the optimal way to enhance bus and carpool options. “It encourages carpool and ride-sharing,” said Mike Guarino with the Fairfax County Department of Transportation. “We think it achieves a lot of advantages the transit center would bring,” he said.

In August 2017, the transit center-park and ride lot decision will be released to the public, and Cook encouraged all to fill out an online survey, but noted that the $9 million park and ride lot is probably the most favorable in this case. Then the microphone was turned over to the audience for questions. Topics included the “do nothing,” option by a resident that looks at the gridlock every day, while another questioned park and ride lots in other parts of the county. “We live here, we’re the ones that are going to have to live with it,” said one speaker. “I live here too,” Cook said.

THE PROJECT completion date is 2025, but that may be sooner, said Cook, although he didn’t say how much sooner. There are a series of upcoming meetings though, starting on Sept. 18 when they have a workshop to look at Guinea Road, followed by Oct. 2 workshop on Wakefield Chapel Road and then Oct. 25 for Braddock and Burke Lake Road. Cook said that more information about these workshops will be listed in his newsletter.