Why does a millennial cross the road? To get to transit, perhaps. 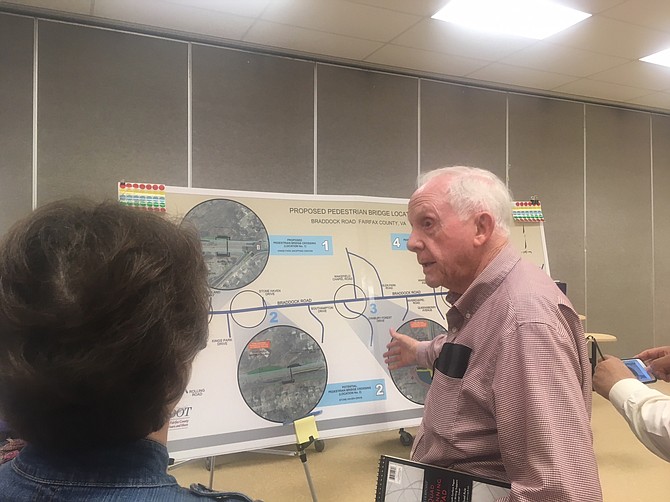 Long-time resident Bill Brennan looks at the plans for the intersection near his house. Photo by Mike Salmon. 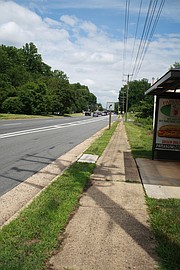 Along Braddock Road behind the Kings Park Shopping Center, one of the pedestrian bridges is planned for this area.

Bill Brennan has lived in the Braddock Road corridor since 1966, when it was one lane on each side, and there was a one-lane bridge crossing Accotink Creek. Fast forward 52 years, and he now lives off Wakefield Chapel Road, and looks out for glass in the intersection that is there from all the accidents. “It’s almost impossible for us to get out during rush hour,” Brennan said. “There are accidents about twice a week, we have to dodge the glass,” he added.

Brennan and his wife were at the Pedestrian Bridge Workshop on Wednesday, June 20 to find out what can be done for his intersection, which is one of the three secondary locations that is being looked at for a future pedestrian bridge. Frequently, pedestrians are part of the mix at this intersection, and a bridge would help them cross safely.

Of the four pedestrian bridges that are being looked at for the Braddock Road corridor, the proposed bridge at the Kings Park Shopping Center is the only one that is already part of the transportation improvements plan that will get underway in the next few years and be completed by 2025. The other two are at Stone Haven Drive and Port Royal Road.

“These are the three spots that seem to be the best candidates,” said Supervisor John Cook (R-Braddock), who held this meeting as a part of the Braddock Road Improvement Project. Plans include intersection improvements at several locations, bike and pedestrian improvements and the use of HAWKS, “High-Intensity Activated Crosswalk Beacons” for safer crossings.

COOK is looking at additional transit to help with the congestion on Braddock Road and the bridges will be part of that, getting commuters to the right side of the road to catch buses either east or west depending on where their destination is.

“We’ve got a lot of people still going to the Pentagon at 5:30 in the morning,” Cook said. “It kind of needs to be a transit corridor,” he said. “Millennials, they like transit,” he added.

In the question and answer portion of the meeting, one person in the audience questioned whether pedestrian bridges are a solution, and are they really used?

The answer was yes and no, according to Michael Guarino of the Fairfax County Department of Transportation. The bridges are “providing an alternative,” Guarino said.

According to a pedestrian advocate group Pedestrians.org that produces a public affairs television series called “Perils for Pedestrians,” the pedestrian crossings at the trail or sidewalk level show more use because the pedestrian or cyclist will not have to use a ramp. This is like the trail that crosses I-495 in Vienna, or the Capital Crescent in Bethesda, Maryland. “Long winding ramps, stairs, or elevators, are perceived as inherently inconvenient by most pedestrians,” their information stated.

Another question was about snow removal, but there wasn’t a solid answer on who will have that duty if we get a significant snowfall in the future. Cook suggested that the nearby residents could possibly help out in such a situation by throwing some salt down or shoveling a little.

THE MEETING was a first stage for the pedestrian bridges, and Cook encouraged people to participate in the comment period so the planners can gauge the support for the pedestrian bridges. The comment period will last until late July. “Give us that feedback,” he said. A meeting is planned for October to see where they are. Email comments to Braddock@Fairfaxcounty.gov or call 703-425-9300.