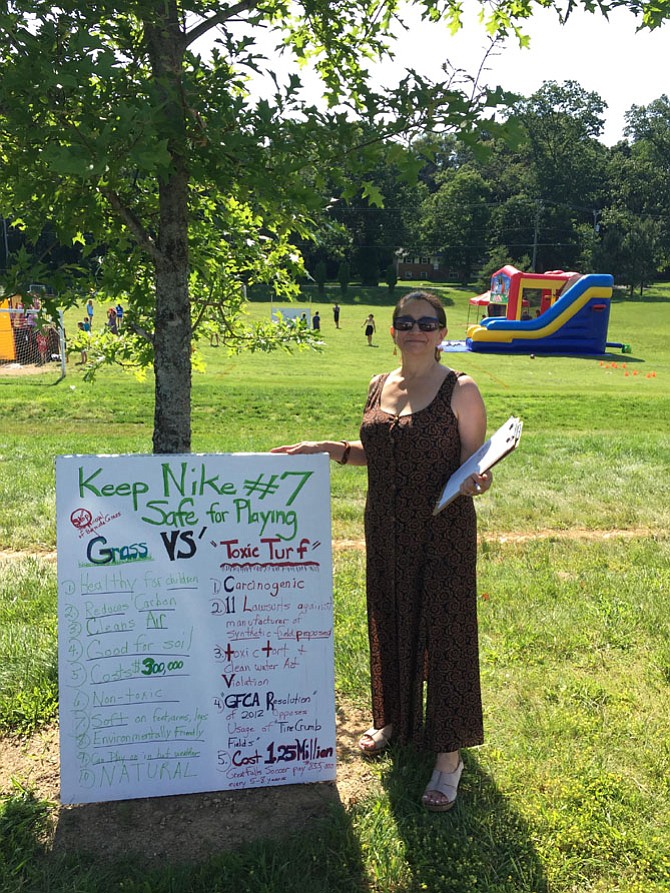 Gail Pean, mother of Vanessa Pean, protests against the turf renovation on Saturday, June 10, at the Great Falls Nike Park during a “Family Fun Day” event hosted by the Great Falls Soccer Club to benefit its fund to turf the field. Photo courtesy of Gail Pean

Field No. 7 at Nike Field Park, which has Bermuda grass, is named after Vanessa Pean.

A Cat excavator sits behind the memorial for Vanessa Pean on Saturday, June 24.

The number of Great Falls residents opposing the $1.25 million renovation of Field No. 7 at the Great Falls Nike Park is growing. The reason: Crumb rubber.

The private-public partnership between the Great Falls Soccer Club and Fairfax County originally presented a plan to the community to replace the Bermuda grass of the soccer field with a CoolPlay system made of synthetic turf material.

The technology was invented by the FieldTurf company, which designed the system to have cooler surface temperatures than traditional turf fields, which can become burning hot.

This is the second time the citizens association has intervened on plans to convert natural grass fields to artificial turf in Great Falls. In 2012, the GFCA prevented the Great Falls Lacrosse Association from using crumb rubber when it was converting the Nike Field No. 4 from natural grass to synthetic turf, according to Glen Sjoblom, a member of the GFCA EPT Committee, which passed the resolution.

The GFCA’s intervention in 2012 resulted in the lacrosse association and the county using an alternative synthetic infill on the field called TPE.

TPE, or thermo plastic elastomer, is a non-toxic, heavy-metal-free infill that is 100 percent recyclable and reusable when the field is replaced, according to the Synthetic Turf Council, a trade association for the synthetic turf industry.

TPE infill uses virgin-based material, while crumb rubber is composed of used tires. The TPE material is what the soccer club has been pushing the county to use for its new soccer field.

“We actually don’t want the crumb rubber,” said Will Simonds, commissioner of the GFSC. “We had said that right at the beginning to the county, but there’s a cost associated with [TPE] that’s a bit more than the crumb rubber.”

The CoolPlay field was a compromise the soccer club agreed upon with the county, according to Simonds.

“It has 25 percent of the crumb rubber in it, so much less volume of it,” he said. “We thought that was a decent compromise, but then people started complaining about any crumb rubber, which we are fine with. We’d love to work with them and get the stuff that we originally asked for. We never asked for the crumb rubber.”

THE CALL TO BAN crumb rubber is out of concern for its safety.

The agencies have not published any findings yet. However, a status report was released on Dec. 30, 2016, that identified chemicals found in tire crumb.

Chemicals of concern used in tire manufacturing range from polyaromatic hydrocarbons (PAHs) in carbon black to zinc oxide (ZnO), which is used as a vulcanizing agent and could contain trace amounts of lead and cadmium oxides, according to the status report.

Research continues and the agencies are collecting and analyzing samples of tire crumb material collected from tire recycling plans and synthetic turf fields around the country.

While the federal, multi-agency investigation continues, the GFCA committee’s resolution is mandating the soccer club to find an alternative material and that Fairfax County phase out the use of crumb rubber on its public playing fields.

Whether the county listens to the GFCA’s demands is optional, but officials are taking the group seriously and have postponed construction.

“The Fairfax County Park Authority is delaying the start of construction for conversion of Field No. 7 at Great Falls Nike Park to synthetic turf pending further community discussion on the project,” Judith Pedersen, spokesperson for the park authority, said in a statement to the Connection.

The original plan would have started construction in June and completed the work by early September in time for the fall soccer season.

Another wrinkle in the plan has surfaced as more community members learn of the partnership to renovate the field. This latest objection is a personal one from a local mother.

VANESSA PEAN, a junior at the Potomac School in McLean, died in October 2005 after she lost control of her car and crashed when she was just 16 years old.

“She had played on Nike 7 the morning of her car accident,” Gail Pean, her mother, said. “When she passed away, she was captain of the Great Falls Strikers team and she had played soccer since she was 5. She was also on varsity soccer at the Potomac School.”

The morning after her fatal car wreck, the Strikers were supposed to play a game on Field No. 7, according to Pean.

“A lot of the players didn’t want to play after Vanessa passed,” she said.

The game was canceled and the parents of Vanessa’s teammates began working together under the leadership of Jay Donegan, whose two daughters played soccer with Vanessa, to work with the county to memorialize Vanessa by naming the field in her honor and constructing a granite memorial on the grounds, according to Pean, who said she was initially unaware of the plans because she was naturally consumed with grief.

Soon after, the Vanessa Pean Foundation was established, which hosted tournaments, races and luncheons to raise funds for charitable scholarships and projects, as well as funds for the GFSC to maintain the grass field.

The foundation no longer hosts fundraising events in conjunction with the GFSC because of conflicts between Pean and a former commissioner of the soccer club. But the sign and memorial bearing Vanessa’s name still stand on the field.

Pean was shocked when she learned of the plans to convert Vanessa’s field from natural grass to synthetic turf.

“Vanessa was very health conscious,” Pean said. “She wouldn’t drink soda, she was adamantly opposed to anybody smoking. She would be appalled to find out that they’re ripping up the field and putting something that’s hazardous to children and adults, the toxic crumbs in the air.”

Pean has since started a “Keep Nike # 7 a Safe Soccer Field” petition on iPetitions.com, which more than 100 people have signed online. She also started collecting signatures in person on Saturday, June 10, at the Great Falls Nike Park during a “Family Fun Day” event hosted by the GFSC to benefit its fund to turf the field.

“I have about 200 signatures now against it,” she said.

Pean’s determination to defend the natural field surmounts any number of sympathizers’ signatures.

“There are other types of grass and they need to just maintain it properly, and not worry about people having a rainy day and they can’t use it,” she said. “That’s part of life. My daughter played in the mud and didn’t mind it,” she added. “It’s a lot better than using something carcinogenic.”

Pean and the GFSC Commissioner talked at the fundraiser, but the soccer club plans on continuing to push for synthetic turf.

“We are going to obviously continue forward trying to push for the synthetic grass field,” said Simonds. “We only have one full-size field in Great Falls that’s ours for three seasons, and that’s Nike 7.”

Simonds agrees that natural grass is the best playing surface, but insists the amount of traffic the field takes on makes it impossible to maintain.

“Our club has grown by 40 percent in the past two years, yet we haven’t been allocated any more field space by the county,” he said. “It just gets beat up and we can’t maintain it the way it deserves to be maintained, to be perfectly honest. Playing soccer on a really, really nice grass field that’s perfectly manicured is the best, but we can’t keep it up with the pressure we’re getting.”

While Simonds sympathizes with Pean, he stands by his club’s desire to turf the field and says his players’ safety is at stake.

“She pulled my heart strings, and I get it, but from a club perspective and from a survey that we took from our memberships, they really want a synthetic grass field,” he said. “We’ve only got that one field and it’s not doing her daughter any service,” he added. “It’s in terrible shape and kids are going to roll their ankles. It’s become actually dangerous to play on because it’s in such bad shape.”

Whether the field will continue to be a symbol of a beloved teammate and soccer player is unknown.

“We would love to keep it named after [Vanessa] if [Gail] wants to,” Simonds said. “We definitely need to turf the field and if she doesn’t want her daughter’s name associated with that, that’s too bad, we’d love to keep it, but if that’s the case, I’d understand that too.”

Amy Stephan, a Great Falls resident and advocate with the Safe Healthy Playing Fields Coalition, began speaking out against the synthetic turf ever since the plan was unveiled to the community. Her coalition, along with the GFCA, formally met with county officials to present its research and concerns about both crumb rubber and TPE infill.

“We briefed the county on the health effects, toxicity and so forth,” said Sjoblom. “There were six or seven senior managers of the county at the meeting.”

By the end of the meeting, Kirk Kincannon, the director of park authority, agreed to convene a group of people from the park authority, soccer club and citizens association to examine other field materials, according to Sjoblom.

WHILE GREAT FALLS takes on the county, other jurisdictions are shying away from using artificial turf until the federal multi-agency investigation publishes its final determination on whether artificial turf fields are safe or not.

Across the Potomac River in Maryland, the Montgomery County Council approved a resolution in 2015 banning crumb rubber fields by requiring all new artificial turf playing fields use only plant-derived infill materials in projects where county funds or contracts for the installation are used.

There are 48 athletic fields composed of crumb rubber and synthetic turf material that are used by public schools and parks within Fairfax County, according to the park authority.

For the latest project in Great Falls that is now on hold, the Fairfax County Park Authority Board approved a $20,000 grant to be combined with an $855,000 contribution from the GFSC and $125,000 from the Neighborhood and Community Services Synthetic Turf Development Mini-Grant Program, and $250,000 from the 2012 Park Bond.

In the meantime, the GFSC plans on organizing more events to raise money for its obligation of the project.

The full board of the GFCA is also working on a concurrent resolution opposing the use of crumb rubber on turf fields within the county.