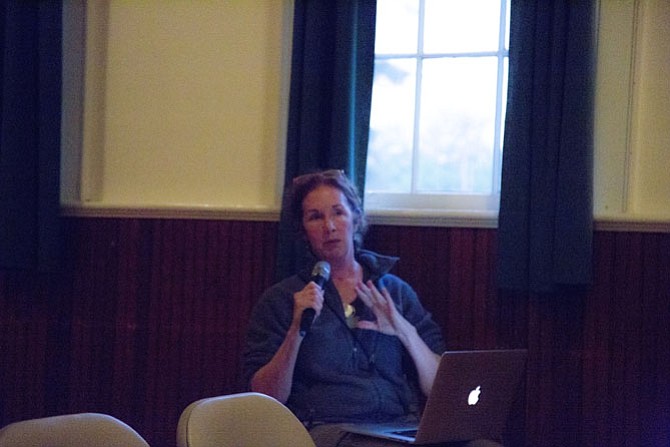 Amy Stephan, a Great Falls resident and advocate with the Safe Healthy Playing Fields Coalition, spoke against converting the Bermuda grass of the field to synthetic turf. Photo by Fallon Forbush.

Great Falls — Fairfax County is moving forward with plans to convert a grass field at the Great Falls Nike Park into a turf field and add lighting, but a handful of concerned citizens have problems with the idea.

During a public information meeting about the $1.25 million project at the Great Falls Grange on Thursday, May 25, county employees were met with criticism.

Amy Stephan, a Great Falls resident and advocate with the Safe Healthy Playing Fields Coalition, spoke against converting the Bermuda grass of the field to synthetic turf.

The plan is to use a turf that uses a three-layer infill system with a top layer of crumb rubber, according to David Bowden, director of the Fairfax County Park Authority Planning and Development Division.

“These materials that are used in Fairfax County are toxic,” Stephan said during the meeting. “This material breaks down into a fine dust … and creates acute and low-dose exposures [of carcinogens] in every single contact on the field,” she added.

The agencies have not published any findings yet. However, a status report was released on Dec. 30, 2016, that identified chemicals found in tire crumb.

Chemicals of concern used in tire manufacturing range from polyaromatic hydrocarbons (PAHs) in carbon black to zinc oxide (ZnO), which is used as a vulcanizing agent and could contain trace amounts of lead and cadmium oxides, according to the status report.

In the meantime, research continues and the agencies are collecting and analyzing samples of tire crumb material collected from tire recycling plans and synthetic turf fields around the country.

“This is not a joke,” Stephan said.

“Our county executives reviewed this with our director of our health department and they made a determination that they are fine with us using crumb rubber on fields in Fairfax County,” Bowden said during the meeting.

Stephan then quickly rebutted by saying that the statement was “very different from saying they’re safe.”

“I didn’t say they were safe,” Bowden replied. “I said our county executive with review of our health department has made a decision that it’s OK for us in Fairfax County to … proceed using crumb rubber.”

“No, what … you’re saying that we’re operating without information on the toxicity,” she fired back.

“I’m not saying that at all,” he said. “You can interpret what I’m saying however you feel.”

Bowden also said that the county is participating in the federal artificial turf study.

“They have used our fields for sampling and if you want to follow along, that’s the best resource I know,” he said.

Though meeting attendees were told that the LED lighting technology for the field would prevent light from spilling 150 feet outside of the property line, lighting and noise was also a concern for several abutting homeowners.

The county could schedule the field until 11 p.m., seven days a week, once the lights are installed. The curfew on some of the other fields in the park that have lights is 9 p.m.

“This is going to be 100 feet from my house and I have two little kids that go to school and you’re going to light it up until 11 o’clock at night,” Joe Dupelle, who lives next to the field on Utterback Store Road, said during the meeting. “Is there anything you’re going to do about noise?”

Dupelle requested that this new field also have a curfew, which county staff said they would look into implementing.

Construction is scheduled to begin on the rectangle field No. 7 in the park in late June and is expected to be complete in early September in time for the fall soccer season.

The Fairfax County Park Authority Board approved a $20,000 grant for the project that will be combined with an $855,000 contribution from the Great Falls Soccer Club and $125,000 from the Neighborhood and Community Services Synthetic Turf Development Mini-Grant Program, and $250,000 from the 2012 Park Bond.

“I let my kids play on these things a lot before I knew,” Stephan said. “Parents have to wake up and say to [Dranesville Fairfax County Board Supervisor] John Foust and say to their sports groups that they care.”

Including Stephan, there were only a handful of people at the meeting.