Herndon’s Citizen of the Year
Votes

Herndon’s Citizen of the Year 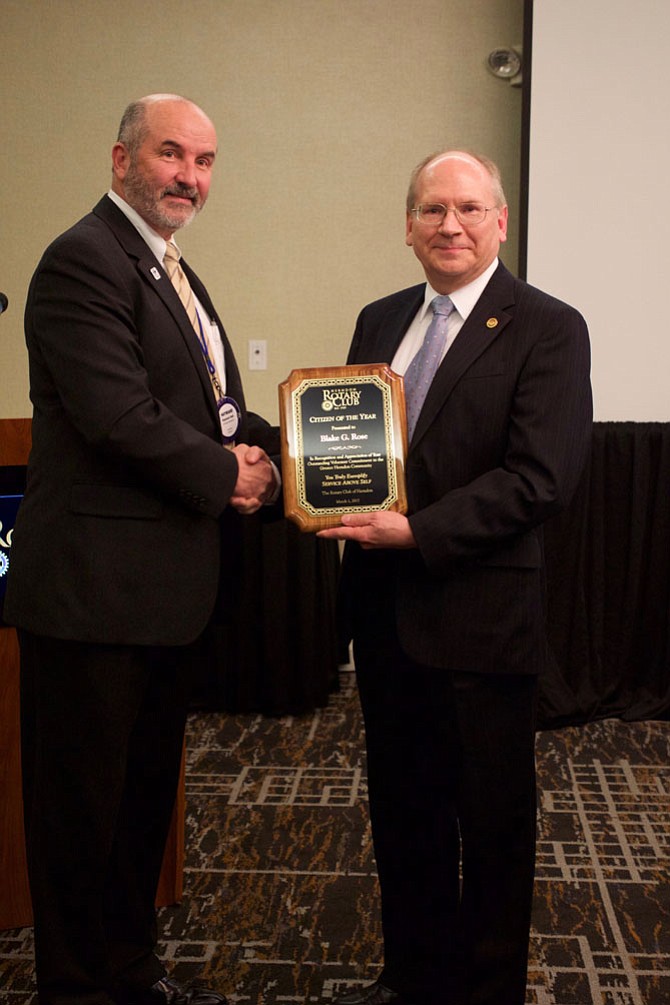 On behalf of the Herndon Rotary Club, Haywood Hull, president, presented the club’s Citizen of the Year award to Blake G. Rose. “Thank you, Blake, for touching the lives of so many in the Herndon community,” said Hull. Photo courtesy of Movoly Productions 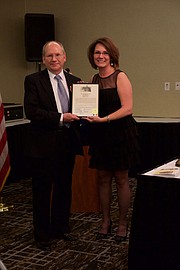 On behalf of the Herndon Town Council, Mayor Lisa C. Merkel presented Rose with a proclamation declaring March 1, 2017, Blake Rose Day in the Town of Herndon.

Blake Rose and his wife Nancy Rose share a moment during the Recognition Banquet. Blake met Nancy during his first night of training at HCTV when she taught him how to operate a camera.

If you've ever had the opportunity to meet Blake G. Rose, the quiet guy behind the camera lens for Herndon Community Television camera, you'd probably never guess his level of dedication to volunteer service might be unsurpassed in the local community. But the Herndon Rotary Club found out about his exemplary model of service above self, which just coincidentally, happens to be Rotary's motto.

On behalf of the club’s membership, Hayward Hull, President, welcomed guests to the evening event. "It is with a deep appreciation for his dedication and significant accomplishments that we come together this evening to honor Blake Rose," Hull said.

DURING THE BANQUET, Charlie Waddell, Chairman, Board of Directors Herndon Community Television, introduced his mentor and friend, Rose. As Waddell shared anecdotes about Rose’s 27-year history with Herndon Community Television, he recalled how Rose learned the technical skills necessary to produce public access broadcasting including filming events such as the Herndon Festivals and town council meetings.

Waddell shared that what Rose does best though is film editing. “He can turn a jigsaw puzzle of video footage into a story that will educate and amuse viewers.” Waddell explained that Rose works behind the scenes on a near daily basis for HCTV. “His commitment to HCTV, to our community and excellence is unflagging.”

Waddell presented a letter volunteer Allie Kassraie had written: “Mr. Rose has always been very warm and kind to all the volunteers… If more people displayed the diligence and kindness that Mr. Rose has, the world would most definitely be a better place.”

Waddell noted that Rose’s volunteerism exceeds beyond HCTV. Last year Rose was instrumental in the formation of a new group in the town, the Herndon Regional Wind Ensemble, where Rose plays saxophone and clarinet.

During the evening banquet, Rose received two other recognitions, one state and one local. Member of the Virginia House of Delegates, Jennifer Boysko (D-86) presented Rose with a Virginia Commendation from the Commonwealth of the General Assembly by House Joint Resolution commending Rose for his commitment, service time and appreciation for all the work he does. Lisa C. Merkel, Mayor for the Town of Herndon, presented Rose with a Town Proclamation that declared March 1, 2017, Blake Rose Day in the Town of Herndon.

IN HIS ACCEPTANCE REMARKS, Rose explained the importance of volunteering to him. He said not only does volunteering at HCTV bring him joy but also the important sense of community he feels in Herndon. “Here we are in one of the largest metropolitan areas in the country, in the shadow of the nation’s capital. Yet we’re able to experience the feel of a small town where you're on a first-name basis with the Mayor, members of the Town Council, town staff and police officers,” said Rose.

According to Rose while HCTV plays a vital role through its broadcasting of town council meetings, the organization also covers local cultural and business events, teaches television production to middle and high school students and offers students the chance to produce their own programs.

At the banquet, Herndon Rotary Club also recognized three club members who had contributed to the local community. “Some people serve by donating their time," Hull said. "Others by making a contribution and many do both. All types of service are of tremendous value.” He added, “In particular, I would like to thank Vicky Robertson, Sheila Olem and Richard Ramsburg.”