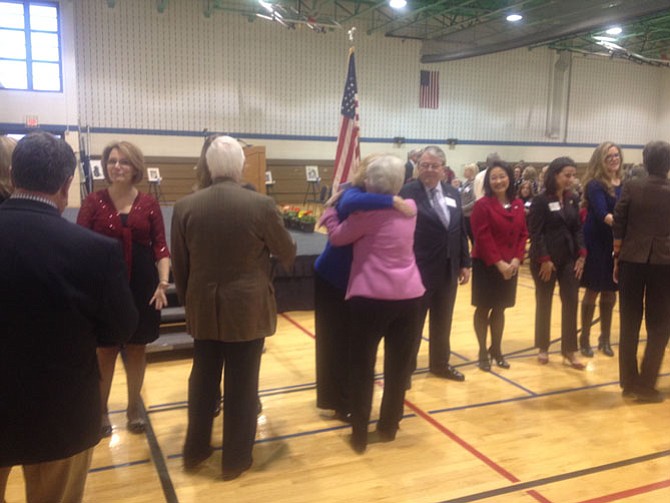 On April 10, members of the Herndon Town Council greeted guests attending the 32nd annual Mayor’s Volunteer Appreciation Night at the Herndon Community Center. Herndon is the largest of three towns in Fairfax County, and National Volunteer Week is celebrated from April 10- 16. Photo by Ryan Dunn. 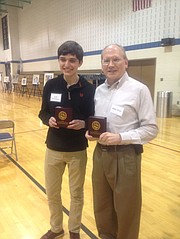 Herndon High School junior Jack Norcross, a volunteer with nonprofit Herndon Community Television (HCTV) and Blake Rose were both given the Distinguished Service award. Blake Rose has been volunteering with Herndon HCTV for 25 years. 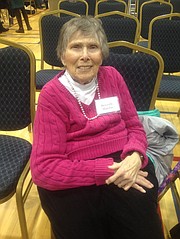 Beverly Harris received a Distinguished Service award in recognition of her years of volunteer work. Harris served 11 years as the secretary for the Mary Martha Circle and volunteers as a docent at the Herndon Depot on behalf of the Historical Society.

Herndon Mayor Lisa Merkel (left) and Executive Director of Arts Herndon Signe Friedrichs (center) smile for a photo at Herndon Community Center with Herndon HCTV volunteers. Herndon HCTV broadcasts from the Old Town Hall in downtown Herndon, and is a volunteer-run station. This group offers training for those who want to help the camera crews cover area news and events.

Herndon helped volunteers feel the appreciation at the 32nd annual Mayor’s Volunteer Appreciation Night at the Herndon Community Center on April 10. “In addition to distinguished service award recipients, tonight we honor 370 Outstanding Service Award recipients, each of whom has dedicated more than 100 hours of volunteer service to our community,” said Mayor Lisa Merkel. Herndon is the largest of three towns in Fairfax County, and many would agree with the mayor’s assessment that Herndon is a small town with a world view and a big heart.

This is the 32nd year Herndon has recognized its outstanding volunteers, demonstrating the importance of recognizing volunteers for their vital contributions. Since 1985, when then Mayor Rick Thoesen introduced this event, Herndon has celebrated the accomplishments of over 10,800 Outstanding and over 100 Distinguished volunteers. (Distinguished Service Award winners for the previous year were Carolina Calderon, Amy Peterson and Mike O’Reilly.) “We are really lucky in Herndon to have such a large group of volunteers,” said Vice Mayor Jennifer Baker.

“It is always wonderful to see new volunteers, and it keeps me excited and motivated,” said Town Councilmember Grace Han Wolf.

NATIONAL VOLUNTEER WEEK, April 10-16, is about inspiring, recognizing and encouraging people to seek out ways to engage in their communities. In its 42nd year, the National Volunteer week theme, “Celebrate Service,” captures the meaning of this signature week, honoring the people who dedicate themselves to taking action and solving problems in their communities. “Few communities have as many active volunteers as Herndon,” said former Town Councilmember Connie Hutchison.

“It is great to see the turnout we have tonight. I think it speaks volumes about this place,” said Herndon resident Bill McKenna, producer of a podcast series called Not Another Podcast. The Distinguished Corporate Service Award honors a business or corporation that has contributed to the Town through outstanding commitment to, or promotion of, the Town for the greater good of Herndon. This year, the award was given to Airbus Group, Inc. which has been a community partner with nonprofit LINK for the past six years.

Helping cover the event were Herndon HCTV Executive Director Nancy Rose and her husband Blake Rose. The first Distinguished Service Award was presented to a teen who has volunteered for the past three years with Herndon HCTV. Herndon High School junior Jack Norcross serves as a part of a group of teens that produce a series of TV programs with Herndon HCTV. Jack is also a member of Herndon High’s Key Club and volunteers frequently with local non-profit Cornerstones. “I thank Mr. and Mrs. Rose for everything they do with HCTV,” said Norcross.

The second Distinguished Service Award was presented to a community member who has displayed volunteerism in the town for over 20 consecutive years. Beverly Harris was one of the early volunteers for the then named Jeanne Schmidt Free Clinic and served 11 years as the secretary for the Mary Martha Circle. Harris volunteers as a docent at the Herndon Depot on behalf of the Historical Society and is their secretary. She volunteers at the Closet and has been a docent with the Holiday Homes tour for many years. Harris is a board member with the Herndon Village Network and is beginning her 21st year as an usher at Wolf Trap Performing Arts Center. To cap it all off, she just completed a two-year term as President of the Herndon Fortnightly Club.

The third Distinguished Service award winner volunteered for many years in the Herndon, and acquired 25 consecutive years of volunteerism with Herndon HCTV. When Blake Rose first began volunteering with HCTV, he had to learn to use the cameras. Since then he has mastered every aspect of community television and in producing public access programming. He met and married his wife Nancy, another HCTV volunteer, and he inspired their son Brian to study the visual media profession. Blake Rose was also instrumental in the formation of the Herndon Regional Wind Ensemble. “This was an honor long overdue,” said former Councilmember Charlie Waddell, who volunteers with HCTV. “I am surprised but honored, and pleased that between myself and Jack Norcross, another HCTV volunteer got this recognition,” said Blake Rose.

Herndon HCTV broadcasts from the Old Town Hall in downtown Herndon, and is a volunteer-run station. This nonprofit offers training for those who want to help the camera crews cover area news and events. “They really do keep our community connected. If you want to know what’s happening, tune into HCTV,” said Mayor Merkel.

This year’s fourth Distinguished Service award winner was Laura Greenspan who in the last 15 years as president of area nonprofit The Closet instituted professional practices, including acquiring health insurance for its employees. As president, Greenspan collaborates with 44 Council members, 750 volunteers and 12 staff. She works with the leaders of 22 faith-based organizations and several other community groups including scouts, Herndon Woman’s Club and mission teams from across the country. She also leads other initiatives, including toy donations and sales, serves as the training coordinator for Our Daily Bread’s Naomi Project working with pregnant women and new mothers.

MAYOR MERKEL said while Greenspan’s dedication and leadership inspired her nomination, the breadth and depth of her contributions to the community secured her selection as a Distinguished Service Award winner. “It was another great event, and a great way to recognize our volunteers,” said Art Anselene, town manager for the Town of Herndon.