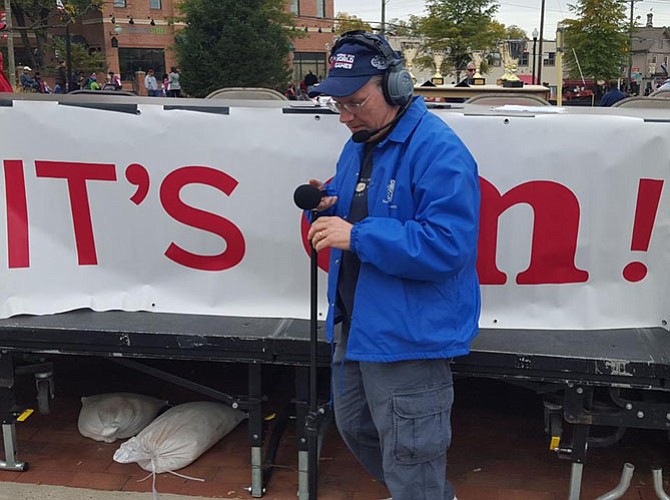 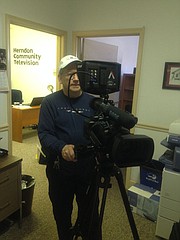 Herndon HCTV president Blake Rose at the HCTV office in downtown Herndon. Members of the Rose family, including Nancy Rose and Brian Rose, have volunteered and helped with HCTV productions.

“Nancy and I were among the original volunteers back in 1990, and have fond memories of those early broadcasts of public hearings from the old Hoover Building on Crestview. We didn’t have cameras mounted on the walls back then, so every evening three or four of us would have to lug rather heavy cameras and tripods up from the basement to the first floor… Today, a single person can be ready to broadcast here from the Council Chambers in less than 10 minutes,” said Rose.

HERNDON HCTV is a nonprofit, cable access PEG station. HCTV broadcasts from the Old Town Hall in downtown Herndon. A small studio and team of volunteers enable the studio to produce its own programming. There is also a studio in the Herndon Town Council Chambers on Lynn Street that allows HCTV to provide live broadcasts of Town meetings and special events in the chambers. HCTV volunteers help cover community events including the annual Herndon High Homecoming Parade, National Night Out, and Mayor's Volunteer Appreciation Night.

Another original volunteer with HCTV is John Dudzinsky, the town’s Urban Forester, who hosted one of HCTV’s first programs, The Back Porch, a gardening tips show. Dudzinsky still volunteers with HCTV. Over the past couple of years, the studio has gotten a boost from a group of Herndon High School students who produce, write and direct their own live show every other Friday evening called Herndon Live. “The creativity and enthusiasm exhibited by these young adults is truly an inspiration for the rest of us,” said Rose.

“I am extremely proud of our volunteers. We are probably pretty unique in that all programming produced by HCTV is done by volunteers,” said Rose. "Many volunteers come to HCTV with no experience, and some come to us with a professional background in TV. They range in age from elementary school to retirees. Some volunteer with us in high school, move on to college and careers in the business, and later reconnect with us to give back," said Rose. Chris Stuard, HCTV’s chief engineer, and Dave Eisenberg, a member of the HCTV Board of Directors, are two such individuals. Marsha Kerman joined HCTV’s staff a year ago and serves as the programming director.

In addition to special events, HCTV partners with the Chamber of Commerce to highlight area businesses in a show called Circles of Influence. It also produces PSAs for the Herndon Police Department and produces videos for Parks and Rec to highlight the Herndon Festival. This past summer HCTV had the opportunity to provide coverage of two unique events held locally, the World Police and Fire Games, and the Korean-American games. Volunteers have been able to cover local area attractions including Frying Pan Farm Park and the Washington West Film Festival.

ANOTHER ASSET has been Brian Rose, who has been helping his parents at HCTV since he was tall enough to reach a camera. “The expertise he has gained over the years has been invaluable in making upgrades to our facilities,” said Blake Rose. Brian is studying at the University of Southern California, where he is majoring in Film and Television Production. Herndon Community Television or HCTV can be viewed on Channel 23 on Cox Communications and Channel 28 on Verizon FIOS. To learn more about Herndon Community Television, visit hctv.org.