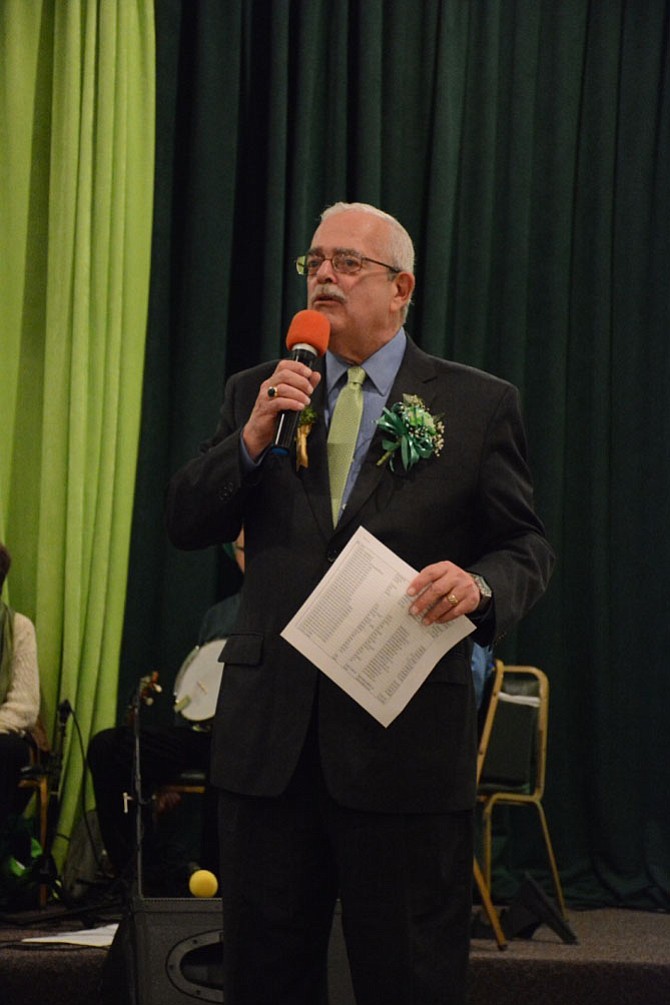 Fairfax County Board of Supervisors chairman Sharon Bulova (center) introduced local elected officials behind her — supervisors, delegates and senators, past and present — as “your team.” 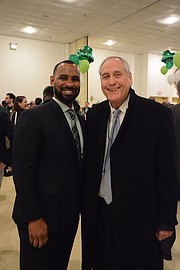 Connolly began hosting a St. Patrick’s Day event in 1995, when he was first elected to the Fairfax County Board of Supervisors. What began as a minor social affair at his home has grown into one of the largest gatherings of Democrats in the Commonwealth.

Walter Carlson of Mantua originally knew Connolly as a neighbor, and has been attending the Fetes since they were in Connolly’s home.

“They’re good for the party, for morale, to build up the team and talk to leaders,” said Carlson, who particularly enjoys the baked salmon and corned beef served at the event.

Carlson said this year was as well-attended as he’s seen at a Connolly Fête.

“Even more important in this political climate — this crowd, it’s because of Trump.”

The anti-Trump rhetoric was running hot, after the President announced in the past week a revised version of an executive order banning travel from several majority-Muslim countries and the refugee program, as well as proposed a budget that would make significant cuts to federal programs including the Environmental Protection Agency and State Department while increasing funding to U.S. defense and nuclear programs by $54 billion.

Lt. Governor Ralph Northam, campaigning to replace Gov. Terry McAuliffe, called Trump a “narcissistic maniac,” who they needed to keep “on the other side of the Potomac River.”

Running to replace Northam as lieutenant governor, Justin Fairfax said after just 60 days in office, “Trump is the worst President we’ve had in history.”

Norham and Fairfax were winners in the evening’s straw polls for their respective hopeful offices, the former soundly beating Tom Perriello and the latter winning the majority of attendee votes over Susan Platt and Gene Rossi.

Fairfax was among the attorneys who volunteered to provide legal services to people being detained at Dulles Airport immediately following Trump’s first executive order banning travel with seven majority-Muslim countries. He said the work was among his proudest moments.

“He doesn’t know what he’s touched off,” Fairfax said. “The rebirth of activism … we will resist, fight for each other.”

Getting in the final words for the evening, Connolly referenced the Women’s March on Washington following Trump’s inauguration. He said it should not be a “one-day feel-good event.”

The politicians conveyed messages of resistance and persistence.

“People are coming up to me like electrical plugs,” he said, asking “where can you plug me in?”

More and more people want to do something, in what he called the “desperate situation the country is in,” in fear of the President’s “unstable behavior.”

Marsden said he is still hoping for Trump to do well: “He’s my President. But all signs point to him not being prepared to do this job.”

The Virginia primaries will be held June 13. The deadline to register to vote or update an existing registration is May 22.