Next for Pipeline Playwrights: ‘Around the Snake Turn’
Votes

Next for Pipeline Playwrights: ‘Around the Snake Turn’

Play by Patricia Connelly about West African practice of trokosi, or sex slaves. 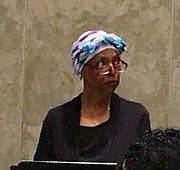 Caroline G. Pleasant will be reading from "Around the Snake Turn" by Patricia Connelly on Monday, April 3, at MetroStage.

The third reading of the Pipeline Playwrights' world-premiere play, "Around the Snake Turn," by Patricia Connelly, will be held on Monday, April 3, at MetroStage in Alexandria.

"'Around the Snake Turn' came out of an article I read over a decade ago in The New York Times about the practice of trokosi," said Connelly who spent two years researching and writing the piece. Accompanying the newspaper article was a photo of a young 12-year-old girl who was serving as a slave to a traditional tribal priest. "The story and photo haunted me," she said.

The play centers around Baaba, whose son is accused of a crime in her West African village, and the local fetish priest places a curse on the entire family. Baaba knows that to appease the gods and remove the curse, the family must offer a young virgin girl to serve the priest as “wife to the gods” or trokosi sex slave. Baaba, however, challenges the accusation, knowing she could never turn over her young daughter or any other child to the local priest. In so doing, Baaba risks everything, fighting family and tradition to save her children.

Connelly said she spent a lot of time researching both the religion and the West African culture, talking with people and asking questions. "I have to know enough to create characters who are fully realized, complex, feeling human beings who live and work within this culture," she said.

The reading is the next step in the development of the play. The first reading was at The Kennedy Center Page-to-Stage Festival in early September and since then Connelly's made a number of revisions. "At this point, I want to see how an audience responds to the story and which parts of it still need revision," she said.

Connelly hopes the audience will be drawn into this family’s story and ultimately be moved by the courage and conviction of the characters, particularly the mother of the family. "I also hope the audience will come away with a greater understanding and awareness of religious practices and a culture that are different from what we know and experience in our country," she said.

Pleasant will be reading the role of Baaba, the mother who tries to keep her young daughter from being sent to the village priest to be his slave.

"I don’t understand or agree with the practice of trokosi, and had never heard of the practice until working with this piece," she said. "One challenge was to not get too angry too soon. I had to be a woman who knows about the practice, but never thought she’d have to worry about her daughter going to the priest."

As far as audience takeaways, she said: "I want the audience to take away the strength, tenacity, and determination people have, and sacrifices we’re willing to make when people we love are in danger."

She added: " And I want them to see that also family pressures, traditions, and cultural conditions, can sometimes overrule what we know is the right thing to do. I hope the audience sees there is not one single way to look at issues … there are as many ways as there are people looking at the issue."

Pipeline Playwrights is a group of women playwrights based in Northern Virginia, working together to support, present, and promote each other’s work with the goal of moving their plays into the local and national theater pipeline.

The reading of "Around the Snake Turn" will be held on Monday, April 3, at MetroStage, located at 1201 North Royal Street, Alexandria. After the reading, enjoy refreshments and informal conversation with the playwright and actors.