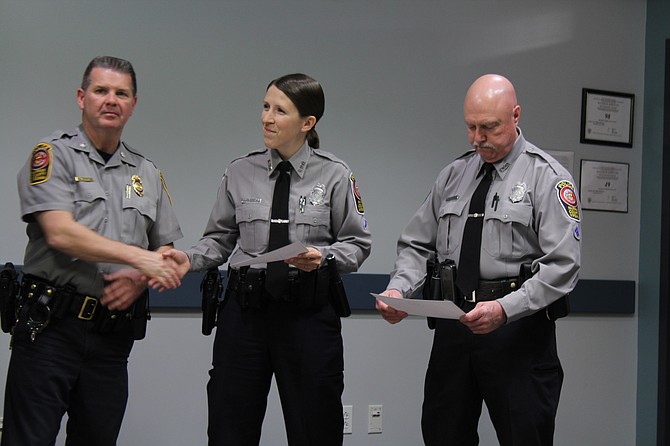 Fairfax County Police Department officers were awarded for their utilization of Nextdoor while on the job (from left): Deputy Chief of Police for Administration Lt. Col. Tom Ryan, Officer Tara Gerhard of the Sully District Police Station and Officer Wayne Twombly of the Fair Oaks District Police Station. Photo by Fallon Forbush.

A year after the Fairfax County Police Department started using Nextdoor, the social network thanked officers and community members for helping the county become one of its top user areas in the country.

These Fairfax County neighborhoods on Nextdoor were recognized for their adoption of the social network, including communicating with the police department.

Fairfax County residents are major users of the Nextdoor social network and the Fairfax County Police Department has taken advantage of it to connect with the communities they patrol and protect.

Nextdoor spokesperson Joseph Porcelli joined the FCPD at the McLean District Police Station on Thursday, March 23, for a press conference to acknowledge the county’s widespread adoption of its free service.

“Over the past year, we have seen the community embrace Nextdoor as a valuable and reliable communication tool,” Deputy Chief of Police for Administration Lt. Col. Tom Ryan, said during the press conference. “In fact, resident adoption has been so strong that Fairfax County is now the fastest growing county using Nextdoor in the Mid-Atlantic and Northeast.”

Adoption of Nextdoor by neighbors across Fairfax County has more than doubled over the past year. Now more than 100,000 residents, in more than 760 neighborhoods, are connected to each other and the police department.

These neighborhoods were acknowledged for their adoption of Nextdoor at the press conference:

Ever since the department started using Nextdoor a year ago, the social network has given them access to communicate with more people than ever before, according to Ryan.

When crimes happen, crime prevention officers use the social network as another platform to post alerts and warnings that are intended to keep their communities safe and help officers locate suspects.

These crime prevention officers also monitor the social network for chatter to stay abreast of happenings in their communities.

“We could not do our jobs without the help of Fairfax County residents,” Ryan said.

“Being proactive is getting the word out quickly,” Ryan said. “We can target information to certain neighborhoods that are more impacted [by crime or crisis].”