Open-air market offers so much more than fresh produce. 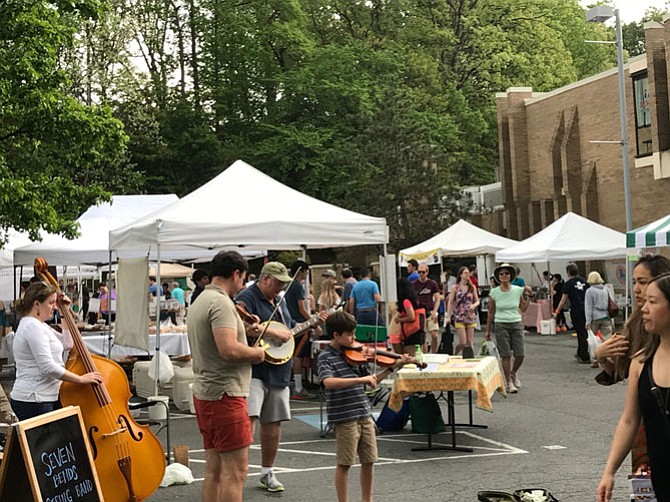 Fairfax County Park Authority produces the Reston Farmers Market. Not only is there a wide selection of produce and other items, but it’s where friends meet up, Fairfax Master Gardeners offers free advice and people can enjoy a bit of musical entertainment. The market welcomes SNAP, the Supplemental Nutrition Assistance Program that assists low-income shoppers, enabling them to add fresh foods to their meals.

Reston — It's been a long time since the first Reston Farmers Market opened, but on

Saturday, April 29, the cowbell rang loud and clear declaring the market open for its 20th season. Faces may have changed a bit, but the quality of food and community spirit has stayed the same.

John Lovaas, a co-manager of the market, in opening remarks reminded those present that Del. Kenneth “Ken” Plum, D-36, opened the Market along with Reston Founder Robert Simon on May 7, 1998. Since that day, Plum has been with them just about every Saturday, as was Simon until he passed away.

Unlike some markets elsewhere, the Reston Farmers Market is filled with stall after stall of vibrant, fresh produce and more. "On May 9, 1998, we had 12 vendors,” Lovaas said. "Now we have 30." With this year's market bigger than ever, it offered fresh produce cheeses, bakery items, meats, fish, pasta, sweets, savories, ice cream, and plants. 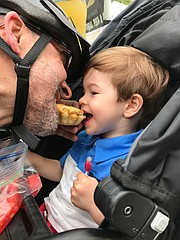 Marvin Rodriguez shared his fruit-filled tart purchased at the Reston Farmers Market with his son Mason. When Rodriguez bought the small pie, he was asked if he was going to eat it himself. “No way,” he said. “I’m going to share it with my son, Mason and my wife, Kelly. That’s the only way to enjoy it.”

Market of 2017 was the variety of fruits and vegetables sold. Their number appears to have grown exponentially. Lovaas said that in 1998 they had three or four varieties of tomatoes. "Today in our market, we have 50 varieties,” he said.

A key element of the Farmers Market is its tradition. Sridhan Ganesan, President of the Reston Citizens Association, shared a bit about why he came to the market Saturday morning. "Coming to the market is a longtime tradition in my family; it's great to be part of it."

Another important aspect of the Reston Farmers Market and one heard from many patrons that morning, was the friendly and welcoming atmosphere, how farmers and customer get to know each other.

The Reston Farmers Market is located at Lake Anne Village Center, 11401 North Shore Drive. It is open on Saturdays 8 a.m.-noon through Dec. 9 but will be closed for Multicultural Festival on Sept. 23. The market is operated under the direction of Fairfax County Park Authority.

For more information about the Reston Farmers Market and to view their vendor list visit www.fairfaxcounty.gov/parks/farmersmarkets/restonmkt.

Starting May 6, the Reston’s Indie Arts Market at Lake Anne Plaza kicks off and will run every week through the first Saturday in November. Located steps away on the plaza beside the lake and operated separately from the Farmers Market, the craft market will feature hand woven textiles, handcrafted jewelry, organic skin care products and more. Visit www.lakeanneplaza.com to learn more.