Both the Springfield boys’ and girls’ teams will be competing May 18-20. 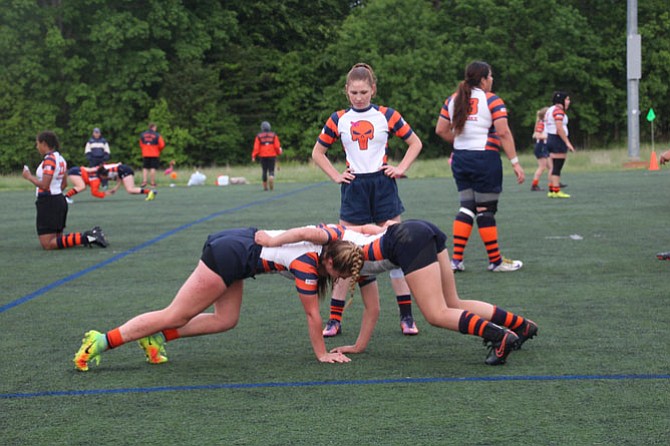 The West End girls rugby team does a little warming up during Virginia Senior Night.

accomplished something pretty amazing — the Springfield South County Youth Club (SYC) West End Rugby teams will both be competing in the national championships next week. The boys will be going to Kansas City, Mo., May 18-20; and the girls to Elkhart, Ind., May 19-20. Last year, the boys won the National Tier 2 High School National Rugby Championship and they hope to do the same this year.

Jeff Rupp, who is Commissioner of the SYC and head coach of the boys high school team, said they will be trying to defend their title. "I'm really proud of these guys. We went last year and did really well and we're going to go back and defend our title,” said Rupp. “These kids work hard and they're very coachable. We will be good representatives of Mid-Atlantic Rugby and Virginia Rugby. We're all excited about going. We just look forward to the opportunity."

He added, "We're one of the only clubs in the entire country where the boys and girls teams are going to nationals. So that's pretty remarkable."

Rupp started the program in 2000; the boys high school rugby started in 2008, and the girls started in 2012. This season, the boys beat Loyola Blakefield from Baltimore and West Shore United from Pennsylvania, losing to Fort Hunt in Alexandria. Across the state, they are ranked No. 3 overall; their national ranking is 25 or 30.

ON MAY 6, the girls team, which is coached by Matt Estes, won their fourth consecutive state championship by a score of 117-0, by playing a combined Rugby Virginia mixed team consisting of other rugby teams from the state. Estes, of West Springfield, coaches the high school and middle school girls teams. When he started five years ago, he had eight players; now there are more than 50.

“I'm very proud of how hard they work and it shows, especially compared to other teams in Virginia and Maryland," said Estes. "To take a team from not even being in existence five years ago to going to three national championship tournaments is pretty awesome. I think it's a testament to how hard the girls work in the season and during the off season."

Estes added, “I think what makes me the most proud is the community they've made for themselves and how they literally welcome girls from different schools and different backgrounds,” he said. “And this team has worked to create a place where everybody feels welcome on and off the field.”

"Our girls are pretty good; they are the best team in Rugby Virginia and nobody else can come close," said Rupp. "They've been to nationals twice and are going back a third time. They haven't won a (national) championship. The best they finished in previous trips was third. They're going back this year and will be very competitive."

Joseph Adase of Springfield has played boys rugby for 15 seasons, since he was 8. He played during the spring and summers for the SYC middle school and high school teams. In just the last three weeks, he's gone to the Exiles and Jesuits tournaments.

"By going to those tournaments, the kids get great competition," said his father Jim Adase. "It gives them great preparation to play at the national level competition." The West Springfield High senior was recently accepted to play rugby for the U.S. Coast Guard Academy, where he'll be reporting to on June 26.

Bret Stevenson, 15, of Burke has been playing lock for one year with West End. The Robinson Secondary student says he is excited to be going to nationals. "We've put in a lot of work this season. I feel like we've got something to prove since we've lost states. We won nationals last year and we need to defend that title."

Head Captain Joshua Thorne, 18, of West Springfield plays the scrum half position. The senior at West Springfield High has been playing West End rugby for six years and is a little nervous about going to nationals. "If everybody works together and does the simple things we were taught, it shouldn't be too difficult," he said. He has a rugby scholarship to play at Mount St. Mary's University next fall and will be traveling to New Zealand to train for more experience.

Andrew Pata, 18, of Springfield has been playing on West End rugby for four years. The West Springfield High senior is excited about going to nationals, where he'll be playing wing and inside center. "It's an amazing opportunity to go back and defend our title. I've been working on this for three months," he said.

ON THE GIRLS SIDE, Elizabeth Wilson, 17, of Springfield has been playing tackle rugby since seventh grade. The West Springfield High student said she is thrilled to be going to nationals. "I'm nervous but I'm also excited to see the high level of play there, and see how our team competes against such high level teams," she said.

Andrea Garcia, 18, of Springfield attends West Springfield High and plays the second row. "There's going to be a lot of teams competing against us. Hopefully we'll be prepared for what we're training for and the outcome will be in our favor," she said.

Joshua’s sister Lindsey Thorne, 16, plays wing and scrum half and attends West Springfield High School. "Honestly, I just think the whole team's been working really hard this year. Going to so many tournaments has helped prepare us for nationals. I think we've come far as a team this year,” she said.

Lindsey's dad Richard Thorne, whose other child Joshua is the boys’ team captain, said, "Rugby is a unique sport where everybody plays regardless of what team you're on; you're a brotherhood or a sisterhood. The closeness that the kids build is amazing. They love each other as brothers and sisters."

He said Joshua has changed since he began playing, and rugby took him to a different place. "When Joshua started off, he wasn't a confident kid. Within six years, he gained leadership skills and unbelievable self-confidence. He's developed the love for rugby because of the team and the atmosphere," he said.

Some of the Virginia All-Star boys include Logan Emery, Joseph Adase, and Joseph Brody. The All-Star girls include Elizabeth Wilson and Abby Tobias, who are also U.S. All-Americans and will be competing on the international level, playing teams from Canada.

THE WEST END RUGBY held a fundraiser at the Fair Winds Brewery in Lorton on Sunday, May 7, for their trip to the nationals. In order to attend, the SYC is trying to raise $35,000 for the cost of airfare, hotels, rental vans, and meals. The players have contributed $700 each thus far. If you would like to help with the cause, make contributions to: www.youthleaguesusa.com/syc/16-17/Donation.html