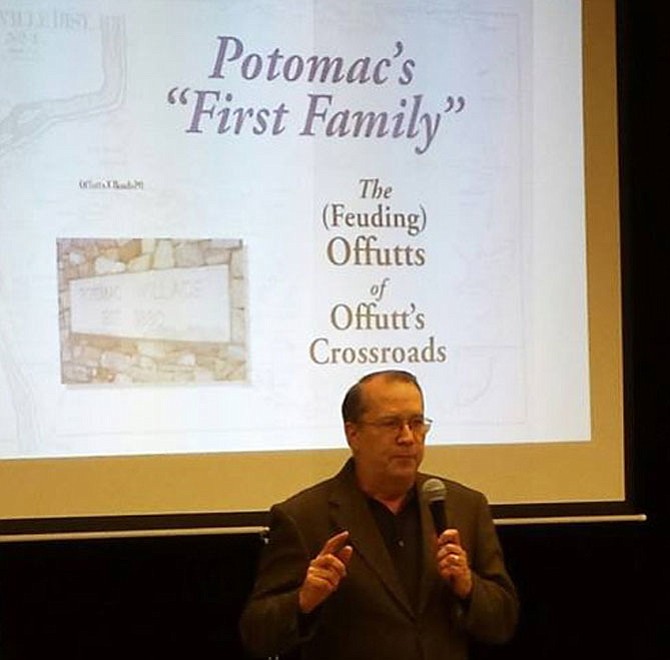 Ralph Buglass will discuss local history at the Potomac Library on Wednesday, June 7.

Potomac’s Offutt family has a colorful history sprinkled with stories of murders, family feuds and lawsuits. Potomac Village Crossroads, where River Road and Falls Road meet, was named Offutts Crossroads for the founding family that originally owned a majority of the acreage surrounding the area.

Ralph Buglass, a descendant of the Offutt family and a member of the Montgomery County Historical Society Speakers Bureau, will share stories from his book, “Legacy Lost” of when and how the Village came to be called Potomac, feuds among his family members, a business partnership that went bad, an attempted murder and a few ghostly appearances in later years.

“Legacy Lost,” is an accounting of the Offutt family history which tells both the admirable and the less commendable stories of the Buglass’ Potomac forefathers. Buglass will be sharing his historical perspectives on Wednesday, June 7 at 1:30 p.m. at the Potomac Library, 10101 Glenolden Drive. The free slide show and talk will follow the 1 p.m. business meeting of the Friends of the Library, Potomac Chapter and is open to all.

In the late 1600s, a Scotsman named William Offutt was granted hundreds of acres by colonial authorities to help settle Maryland. He later acquired an additional 2,000-plus acres around Potomac including a Potomac River island still named for him. His land stretched from Watt’s Branch Creek on the north to Great Falls and Cabin John Creek in the other directions. The meeting point of River and Falls Roads became known as Offutt’s Crossroads until 1880.

“My grandmother was born an Offutt — the last in her branch of the family to be born in Potomac,” said Buglass. “She was born in 1883, three years after the community’s name was officially changed to Potomac. Coincidentally, a retired army captain, John McDonald, who had bought most of her late grandfather’s ‘plantation’ as his own home and then went on to serve the area in Congress, is credited with changing the name at the Post Office’s request.”

In his talk, Buglass will reveal details about his ancestor’s lives including the ones who served as owners of Offutt’s General Store (where Mitch and Bill’s gas station now stands), their wills and inheritances, lawsuits filed against family members and their involvement in slavery. One of his more notorious kinsmen was Thomas Marshall Offutt who was “convicted in Montgomery County Circuit Court of shooting with intent to kill Oratio Clagett, who had opened a rival store at Offutt’s Crossroads,” wrote Buglass.

Buglass has always had a passion for history, and, since his father researched the Buglass family history, he decided to seek out the story of the Offutts and his mother’s Potomac roots. He conducted some of his research on-line by going through the census. Court documents, housed in Annapolis, proved to also be extremely helpful, although he had to search through many records to find court filings from his relatives from the 1800s.

Buglass volunteers with the Montgomery County Historical Society and is the volunteer school-master of the Kingsley School, a one-room schoolhouse located in Little Bennett Regional Park in Clarksburg. For his work in renovating and furnishing the schoolhouse, he was awarded the Agency Volunteer Award at the Maryland Recreation and Parks Association conference in Ocean City in April and was one of three people nationwide to receive the 2014 Country Schools Association of America Service Award, presented in St. Joseph, Mo. in June.

Because of his volunteer work at Kingsley, he has become even more interested in the history Montgomery County’s one-room schoolhouses.“If you count one- and two-room schoolhouses, there are five still remaining in the county,” he said. “Some of my most interesting research has been learning the history of segregated schools in Montgomery County. Teachers in black schools were paid half what teachers in white schools made, and black and white schools had separate budgets, he said. “Money for black schools ran out early and sometimes the schools closed as early as February.”

Buglass is a member of the Friends of the Library Board. He has presented this historical discussion to the Potomac Community Village, the Potomac Newcomers Club and “even to a few spots beyond Potomac through the Montgomery County Historical Society. It's been more popular far and wide than I ever imagined.”