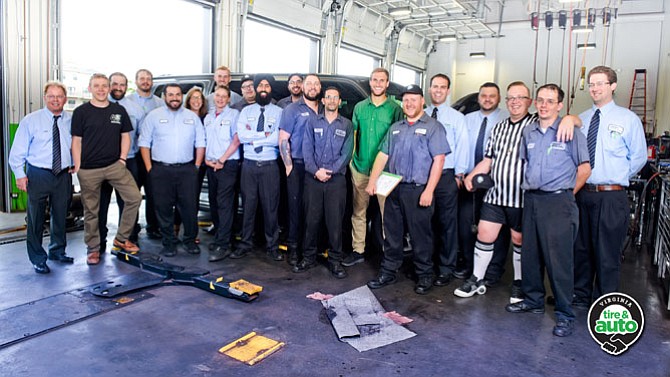 Virginia Tire & Auto, the Fairfax-based full-service provider of automotive maintenance, repair and tire services, will donate a portion of proceeds from oil changes through June 2018 at all 13 locations to the International Justice Mission (IJM). Washington Redskins Quarterback Kirk Cousins, a customer of the Dulles location of Virginia Tire & Auto, is a longtime supporter of IJM. JIM FOLLIARD

For most Americans, the word “slavery” applies to an archaic institution. And, while it is a scourge of the past for the more developed or stable parts of the world, slavery isn’t history for other populations.

“Historically, humanitarian and missions organizations worked courageously to bring healthcare, education, food and other vital services to the global poor, but little had been done to actually restrain the oppressors who are a source of great harm to the vulnerable,” said Jaclynn Willert, director of Professional Athlete Partners and Programs at International Justice Mission (IJM). “More than 20 years ago, Gary Haugen and a group of lawyers, human rights professionals and public officials launched an extensive study of the injustices witnessed by overseas missionaries and relief and development workers. This survey of more than 65 organizations representing 40,000 overseas workers showed that 100 percent of the respondents were aware of cases of abuse and injustice against the poor and vulnerable, but they felt powerless to do anything about it.”

The results of this investigation — that slavery was very much still alive — led Haugen to establish IJM, a Christian non-profit organization to operate on the front lines of the battle against modern slavery.

“Gary established IJM in 1997, and the next year IJM carried out its first rescue operation to free children from slavery,” Willert said. “Then, in 2000, IJM’s first long-term field office opened in Mumbai to partner with local authorities to rescue girls and women trapped in sex trafficking.”

Headquartered in Washington D.C., IJM now has field offices in 17 countries across the world. Altogether, IJM employs more than 850 people to combat violence against the poor.

The non-profit works with local governments to conduct rescue operations; the organization said its efforts led to the rescue 2,356 children, women and men last year.

“We partner with local law enforcement to investigate cases of potential abuse, gathering evidence against perpetrators and helping local authorities plan rescue operations,” Willert said. “We then support authorities as they go into brothels, trafficking sites and other dark places to rescue victims of violence and bring them to safety.”

These boots on the ground operations require dedication, strategy, and – of course – funding. For all the global progress IJM makes, it requires homegrown support.

Currently, Virginia Tire & Auto, the family-owned and operated full-service car repair shop, is fundraising for IJM. Through June of 2018, the business will be donating a portion of proceeds from all oil changes to IJM. This will apply to at all 13 store locations distributed throughout Fairfax, Loudoun and Prince William counties.

“We’re giving a portion of our proceeds to IJM, and we’re really excited to be doing this,” said Julie Holmes, Virginia Tire & Auto president. “Our goal is to sponsor at least two rescue missions, each of which cost about $7,000. In donating to IJM, we’re directing funding the rescue of people from slavery. We’re benefitting the most vulnerable in society. It’s an honor to aid in the incredible work that IJM does.”

“We’ve had a relationship with Kirk Cousins for quite awhile,” Holmes said. “He’s a customer of our Dulles location, and his values align with those of our organization. He’s been a spokesperson for us for two seasons. He educated us about IJM, which he’s been a part of IJM since he was in high school. We’re so grateful for our connection to Kirk, and then how he connected us to IJM. No other organization does work like them.”

“Kirk and Julie Cousins are part of our IJM Pro Athletes Program Team Freedom, and we are grateful to him for inviting Virginia Tire & Auto to join in the fight to end slavery,” Willert said. “It will take all of us coming together to bring rescue and freedom everywhere around the world.”

For information on how a company could partner with IJM, learn more at IJM.org/Partnerships.