Animals From Across the Country Find Homes in Alexandria
Votes

Animals From Across the Country Find Homes in Alexandria 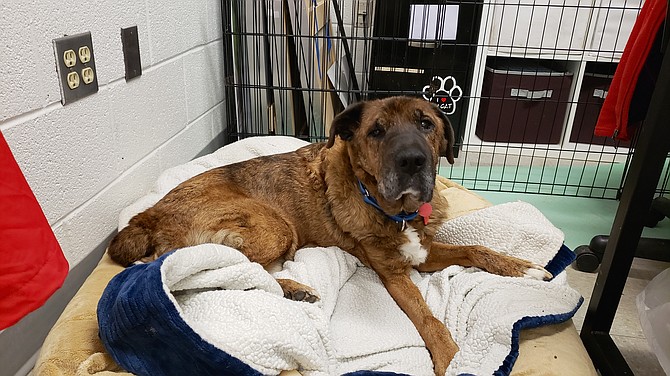 Henry, transferred to the AWLA by a West Virginia-based rescue group, relaxes at the shelter before his adoption. Photo courtesy AWLA 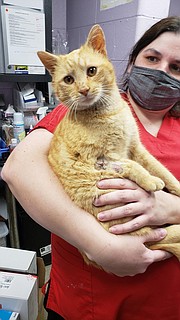 Life wasn’t full of hope for an eight-year-old shepherd mix known as Henry. Arriving as a stray at a shelter in Hardy County, W.Va., Henry had suffered from neglect most of his life. He tested positive for Lyme disease and severe anemia caused by worms, he had a baseball-sized tumor on his abdomen, dental disease and his nails were so long they had grown in circles.

But Henry’s life was about to get much better. A rescue group known as Potomac Highlands Animal Rescue (PHAR), which regularly works with the Animal Welfare League of Alexandria (AWLA), saw a brighter future for him. In an arrangement with the West Virginia shelter, PHAR set him up with medical care and a stay in a local foster home. After learning about Henry, the AWLA agreed to take him.

Henry, who by then was known as Henry IV, proved to be a laid-back resident of the AWLA, serving for a while as an “office dog,” but he didn’t languish at the shelter. “Henry was adopted by a wonderful family who contacted me and said he is the most perfect, docile boy,” recalls Chestina Merriner, a longtime PHAR volunteer who had “recruited” Henry at the county facility.

PHAR is one of several groups the AWLA works with to help animals beyond Alexandria — in southern Virginia, West Virginia and other regions of the country where animals’ chances for adoption are slim. Many of the partner facilities lack onsite veterinarians, surgical capabilities and other resources to cope with homeless animals, especially those who come in sick or injured. They find that working with the AWLA can be the perfect solution. “We have such a pet-friendly community here,” said AWLA Transfer and Training Coordinator Erin Short. “A lot of people are willing to open their homes to give these animals a chance. And our team does a great job of match-making.”

The AWLA has begun regularly working with more shelters and rescues, including the Rockingham-Harrisonburg (Va.) SPCA; the Humane Society of Raleigh County (W.Va.); Save a Dog, Save a Cat and; most recently, the Foxie G Foundation in Maryland. The AWLA routinely takes in animals from Pennsylvania, Ohio and West Virginia delivered by a rescue group called One by One Animal Advocates and even receives animals from Florida’s Miami Dade area from True & Faith Pet Rescue Mission. The AWLA also has sheltered animals by the dozen from across the country in the wake of hurricanes and other natural disasters.

In February, AWLA volunteers modified a van to retrieve 50 cats who were refugees from the severe ice storms in Texas, and brought half of them back to the AWLA shelter for adoption. Each cat had small food and water dishes in their carrier, along with a tiny litter box, said Short, who was on hand for the cats’ arrival at the AWLA. “After the long journey, everyone they saw was their new best friend,” she recalled.

By working with and taking in animals from more of the under resourced facilities, the AWLA not only helps those shelters and rescues but also improves adoption rates throughout the region, bringing animals to Northern Virginia, where there is such a demand for them. “No one goes into animal welfare for any reason other than to help animals, and so many of our shelter partners have to make difficult decisions about who and how they can help daily,” said AWLA Executive Director Stella Hanly. “That’s why we don’t like like phrases like ‘no-kill shelter’ or ‘kill shelter.’ These facilities are all doing everything they can to help the animals in their care, and if we can assist them by taking in some of them, then we are making a difference in this life-saving effort.”

Some of the animals transferred to the AWLA by partners need significant medical attention before they can be considered for adoption. Two Boston terriers from True & Faithful Pet Rescue Mission, one whose vision was clouded by cataracts and the other suffering from an intestinal ailment, had successful surgery arranged by the AWLA and were adopted, thanks to funds donated by the community. Harry, an affectionate black-and-white cat brought to Alexandria by PHAR, had been wounded by buckshot, but surgery paid for by a generous donor proved effective at saving his injured legs, and he was soon adopted. Merriner from PHAR does more than deliver animals on her nearly weekly visits to the AWLA: she often fills her truck up before returning home with donated pet supplies for use by her fosters.

The AWLA was preparing to accept a large group of rabbits when PHAR rescued a sweet, handsome orange tabby cat from the Martinsburg, W.Va., shelter who was suffering from numerous puncture wounds after being attacked by another cat, including a large open wound on his shoulder and paw. Would the AWLA take “Arthur” on too, the group asked. The answer was yes. Later testing positive for Feline Leukemia Virus, Arthur was treated for his wounds and made available for adoption at the AWLA. Though his diagnosis meant Arthur’s life expectancy would be shortened by the disease, his new adopters were thrilled to welcome him into their family.

“We’re very grateful for our rescue partners because without them, we wouldn’t be able to do what we do,” Merriner said. “We’ve been able to save thousands of animals over the years; I can’t imagine not having help from Alexandria.”

The Animal Welfare League of Alexandria is a local 501(c)(3) organization that operates the Vola Lawson Animal Shelter, Alexandria's only open-access animal shelter. In response to the global pandemic, the AWLA has established a virtual adoption process and is operating a Pet Pantry that provides pet food and supplies to community members in need. The AWLA also offers assistance to Alexandrians with questions about wildlife and animals in the community. More information can be found at https://alexandriaanimals.org/.