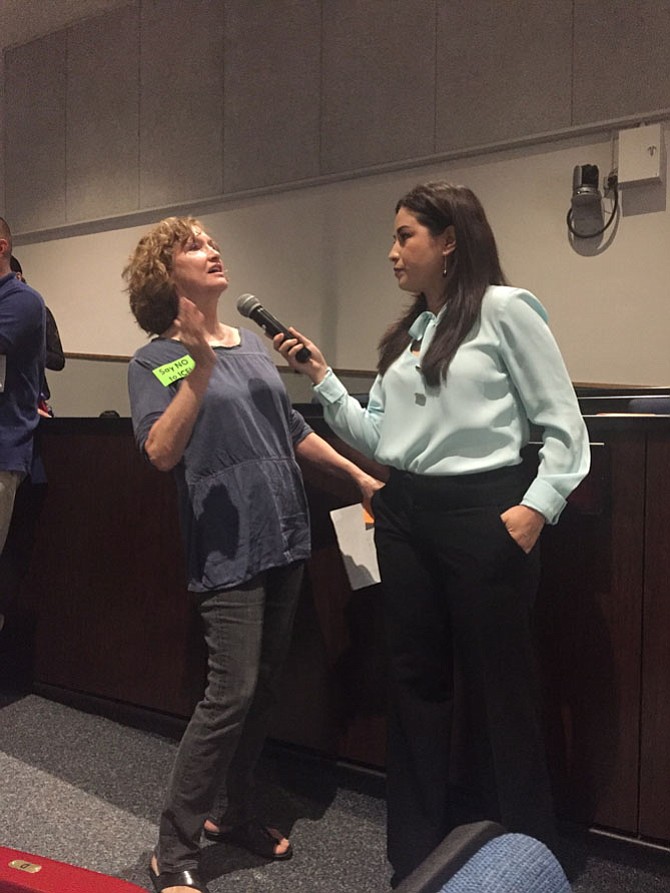 Diane Alejandro (left) expresses her concerns with the Fairfax County police during the open mic part of the forum. Photo by Gretchen Kernbach/The Connection

Members of the audience wear green stickers that read “Say no to ICE.” 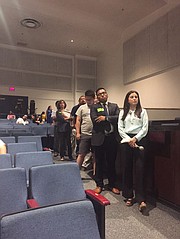 Sulema Salazar hosts a line of audience members who want to ask their questions to the panel directly. 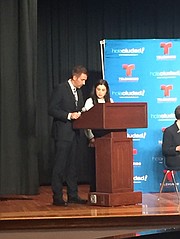 Alonso Castillo and Sulema Salazar prepare note cards with questions on them from the audience.

Although the goal of the June 3 community forum regarding Fairfax County immigration rights was to further connect the county to its Hispanic residents, the meeting ended in disagreement and confusion with attendees chanting “not one more.”

The panel discussion was hosted by Fairfax County government in cooperation with WZDC Telemundo Washington D.C. The objective was for county residents to be able to come in and ask questions about law enforcement, public education and immigration policies.

Hosting the forum was Telenoticias news anchor Sulema Salazar and reporter Alonso Castillo. To eliminate the language barrier between audience and panel, a translator was present at the forum.

BEFORE THE FORUM BEGAN, audience members were given the option to write their questions on notecards if they did not wish to speak before the panel with a microphone. In addition, stickers reading “Say no to ICE” were given out by attendees.

The first of many questions posed to the panel regarded students’ safety in their schools. Palchik took the lead on answering, reassuring the audience that there is a federal law in place that protects the privacy of families and students. Furthermore, students do not have to worry about being taken by ICE at the hands of school administration.

Bulova added to Palchik’s statement, pointing out lines seven and eight in the Fairfax County Statement on Diversity and Inclusion. Line seven reads: “Whereas, Fairfax County Public Schools complies with the federally mandated requirements that we educate all children, regardless of immigration status.” Line eight reads: “Whereas, the School Board is committed to maintaining a safe, inclusive and welcoming learning environment for all children in our public school system and (FCPS) values the richly diverse backgrounds of our students and families.”

“It’s important for people to feel comfortable coming to and working with our police department. When people are victims of a crime, it’s important for our board to make it clear that we are not ICE,” said Bulova. “It’s our job to keep our community safe.”

Another question asked was: What kind of documents are requested at the time of a traffic violation? Roessler responded that a driver’s license would be requested of the driver.

That question allowed Roessler to further explain that Fairfax County police officers are not immigration agents; they do not conduct raids.

ICE, U.S. Immigration and Customs Enforcement, started to become a central theme of the forum. Sandoval-Moshenbuerg emphasized the importance of having a family plan if immigration agents ever do attempt to seize a family member.

The focus of the panel soon changed direction, concentrating on Fairfax County’s relationship with ICE. It was not too long ago, Falls Church resident Liliana Cruz Mendez was pulled over for a broken headlight. However, a minor traffic violation landed her in ICE’s hands and now she faces deportation.

“They found out she didn’t have a license. ICE was there at the traffic stop and they took her into custody. Fortunately, under the Obama administration, we were to get a stay of removal for her, which is basically saying this is not the kind of person we want to deport from this country,” said Katz.

Mendez is a mother to a 10-year-old son and a 4-year-old daughter.

“She got granted prosecutorial discretion several times. Then, two and a half weeks ago, she went in for a regular check-in with ICE, and instead of giving her another year, they said they’re going to deport her. We have been fighting them to change their decision ever since,” Katz added.

This recent situation stirred the audience at Saturday’s panel, they wanted to know why ICE was on the scene at a simple traffic stop. Audience members later stated that they believe Fairfax County’s compliance with ICE is a mere contract, something that can be canceled or renewed. “It appeared to me that Fairfax County has the authority to rescind that agreement. Will you agree to cancel the agreement with ICE?” asked Diane Alejandro, a volunteer with People Power, a grassroots member-mobilization project created in opposition to President Donald Trump.

IN THE HEAT OF THE MOMENT, audience members started yelling out of turn, challenging the panel to answer questions one after another on Fairfax County’s collaboration with ICE. Sandoval-Moshenbuerg stepped in and assured the audience that it is in written policy, since 2007, that the police department not take place in any immigration raids. Therefore, officer retraining could be a possible solution.

“You see hundreds and thousands of people across the country charged with immigration-related offenses. You’re an immigrant, you can’t get a license, so they charge you with driving without a license. That is a huge problem. I commend Fairfax County police for their policy but they have to go even further,” Katz said.

What started out as composed and orderly, turned into audience members speaking over the panel and each other. County officials made it clear that they are here to help immigrants, not deport them.