‘Mystery, Suspense and Never a Dull Moment’ at Centreville High 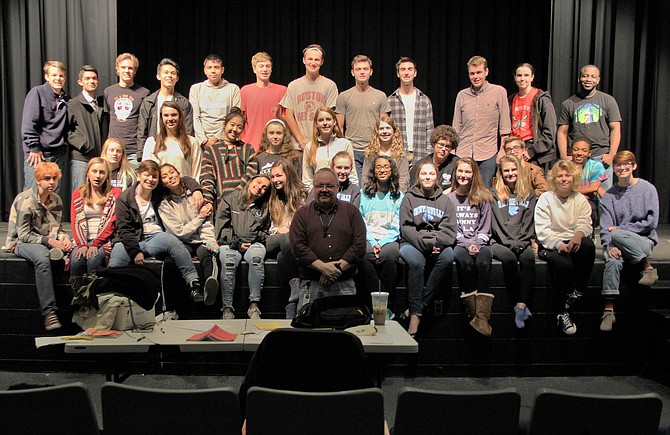 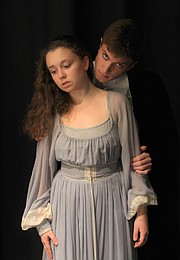 “The horror of the story leaves all the characters feeling isolated and helpless, so they move into and out of that granite plateau.” — Director Mike Hudson

Beware, “Dracula” is about to take the stage at Centreville High. But this version is different from what’s usually seen.

“It’s a refreshing take on that old story and not the typical interpretation of Dracula in a black cape,” said Director Mike Hudson. “It’s a retelling of the novel, but doesn’t lend itself to a lot of blood and gore. It’s fine for middle-schoolers and up, and even mature sixth-graders.”

In Centreville’s play, he said, “The people all appear to be normal. There’s nothing grotesquely abnormal about Dracula, either, but he does have his bad moments. Still, the audience will probably feel more pity and sympathy toward him, by the end of the show.”

It features a cast and crew of 30, with seniors portraying most of the main characters. “They’re probably one of the strongest groups of seniors I’ve had,” said Hudson. “They play off and support each other and work well together, I think they’re really going to be a delight to see.” He also praised student Jameson Crouse, his assistant director, for being “an invaluable help to me.”

“The lighting and scenery will be very atmospheric,” said Hudson. “The set is a huge slab of stone with stairs and columns on all sides. The horror of the story leaves all the characters feeling isolated and helpless, so they move into and out of that granite plateau.”

Since the story takes place in late 19th century Transylvania and England, the actors wear Victorian-era costumes. Boys will don vests and cutaway coats, and girls will wear bustles and floor-length dresses. And several characters will portray Dracula’s victims through the ages, as ghosts, serving as set dressing among the scenery.

Adding to the ambiance, said Hudson, “The sound for this show is very complex. A musical soundtrack and special sound effects play on top of each other.”

Senior Andrew Dettmer plays the title role and describes “Dracula” as a horror drama filled with mysterious happenings. “Bite marks appear on people’s necks and these people start acting strangely,” he said. “There are also two couples and budding romance mixed in, which adds to the story’s tension.”

As a vampire, said Dettmer, “Dracula is the play’s unsettling antagonist. He’s a count living in a castle in Transylvania and wants to buy a new property in England. He has many facets to his creepiness. At times, he’s cold and collected; other times, he has volcanic anger. He’s shown as both younger and older versions of himself, so it’s fun to play them. He displays affection toward some of the female characters, but it’s debatable whether it’s love or desire — and that plays into his controlling nature.”

Dettmer’s enjoying his role because “This is my first, full-on villain and I get to be creepy and scary and wear cool fangs. And it’s interesting working with the other characters to make them terrified of me. I also get to assume totally different traits and physicality from my own.”

He said the audience will like “The aesthetic of the timeframe, as well as the imagery of torment, horror and carnage. There are characters to root for, and we’ll have professional background music and sound effects. There’s a lot going on in the story, clues to what’s happening are layered throughout, and it all builds to a thrilling climax.”

Senior Margot Vanyan portrays Mina. She’s real-estate agent Jonathan Harker’s fiancé and best friend to Lucy, who becomes one of Dracula’s victims. “Mina is a very intelligent woman for her time,” said Vanyan. “She’s maternal and motherly to all the characters, except for Jonathan and Dracula. She’s feminine, but thinks like a man. She’s also a lady and a gentle, loving friend toward Lucy.”

“I particularly love acting in this show because of all the interactions the characters have with each other,” continued Vanyan. “Mina is unlike anything I’ve ever played before, someone so tender and motherly. And she’s critical to the plot — almost all the actions revolve around her and Jonathan, in a way.”

While noting that “Dracula” is a dark play, Vanyan said it’s not depressing. “It’s almost like fantasy,” she said. “There aren’t many plays like it, and it’ll grab the audience’s attention. There’ll be really cool special effects, and Jenny Lee, who plays Lucy, does a spectacular job of transitioning from human to vampire. It’s captivating to watch her.”

Lee, also a senior, said Lucy is one of Dracula’s first victims. “She’s naïve and flirty, unaware of how she hurts with her naivete, but she’s a good person at heart,” said Lee. “She’s sheltered, but has three suitors and is having a difficult time choosing which one to marry. And it was improper at the time being able to consider being in love with more than one man.”

Lee likes playing Lucy because “She screams a lot — which is great fun. At one point, she even gets to be a little creepy. It’s also my first time being cast with some of my really close friends, so it’s great being able to show that chemistry onstage.”

She said the audience will enjoy the play because “It’ll have a lot of cool blocking and costumes, so it’ll be visually appealing. And it’s always fun to watch melodramatic shows because the actors and audience are having a good time, and it’ll immediately pull people into the story. So it’s melodramatic in the best way possible. The actors really put a lot of effort into this show; and with this production’s high energy level, the audience can’t help but be excited about it, too.”

Portraying Renfield is senior Alex Wells. “He’s a lunatic who, in his search for eternal life, has been Dracula’s servant from afar,” said Wells. “He lives in an asylum in England and Dracula controls him. He occasionally has moments of extreme lucidity, when he speaks about life — and even life as a character in literature. He’s also decided that, by eating other life forms, he can prolong his own life. He’s just really crazy and single-minded.”

As Renfield, said Wells, “I get to yell and scream and put great intensity into the character. And I like how he interacts with others. He doesn’t respond the way other people want him to, but goes off on his own tangent. So I don’t have to restrain myself onstage; I can be sporadic and random, and it fits the character even better.”

The audience will like this play’s continual suspense, said Wells. “From the very beginning to the very end, they’ll be wondering what’s going to happen next — and even when they’re walking home,” he said. “The playwright does an excellent job of maintaining the mystery and darkness of the original book.”

Senior Paul Anderson plays Jonathan Harker. “He’s selling a house in London to Dracula,” said Anderson. “He’s sort of the reason everything goes wrong — because if it weren’t for him selling the house, there wouldn’t be any problems. He’s a nice guy, but loses it and doesn’t come back to sanity until the end.”

Also liking his part, Anderson said, “I put a lot of emotions onstage to express whatever Harker’s feeling. He has the first encounter with Dracula, so he understands what everybody else is up against and is involved in everything.”

Anderson said the audience will love the show’s drama. “There’s always something happening around every corner,” he said. “Every scene adds suspense, there’s great acting and there’s never a dull moment.”