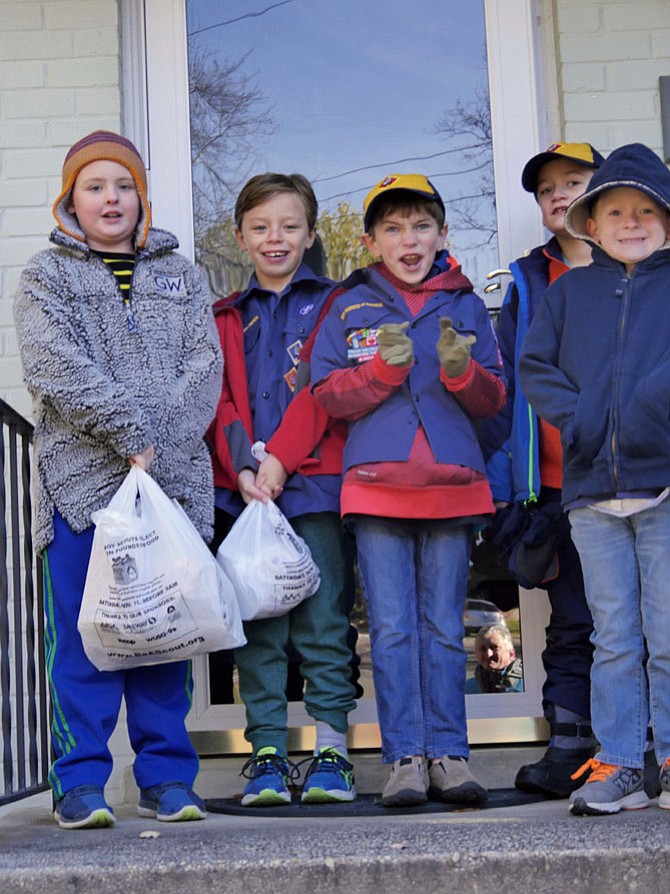 Cub Scout Troop 641 volunteers, in 23-degree temperature, collect food as part of the annual national Scouting for Food drive. This is their second year of participating as part of the Scout Slogan "to do a good deed daily." Their collection area covers Albermarle, Chesterbrook and Glebe Road. Photo by Shirley Ruhe. 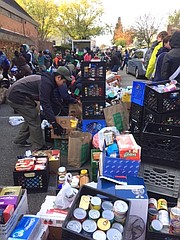 Scouting for Food donations at Our Savior Lutheran Church on South Taylor Street.

A steady stream of cars drives through the parking lot at Our Savior Lutheran Church on South Taylor Street, dropping off donated white bags of nonperishable items for Scouting for Food on Saturday, Nov. 11. Then the assembly begins.

Volunteers sit on the cold concrete amidst bags and boxes sorting out the canned goods from the cereal. An Eagle Scout weaves his way around the piles with a box loaded with cans. Volunteers inside the church sort the canned goods into tomato and other categories, and carts loaded with stacked containers roll through the parking lot toward the truck.

David Carlson, one of the coordinators for the Chain Bridge District for 18 years says, "See that truck over there? It's going to Arlington Food Assistance Center (AFAC) in a few minutes. It's full of cereal." He adds that a lot of people provide the items they requested such as cereal, peanut butter, cooking oil and canned meat, "but some of them give us that can of smoked oysters that they intended to eat but never did."

Carlson says they have at least 100 Scouts working at the church and thousands across the district collecting the food. He says they started collecting food about 8:30 a.m. and estimates they will be finished about 1 p.m. when about 15-20 truckloads full of donations have been delivered to AFAC. Lily Duran from AFAC says when the trucks arrive and are unloaded, everything will be weighed and sorted over a period of days.