The Battle of Arlington Mills
Votes

The Battle of Arlington Mills 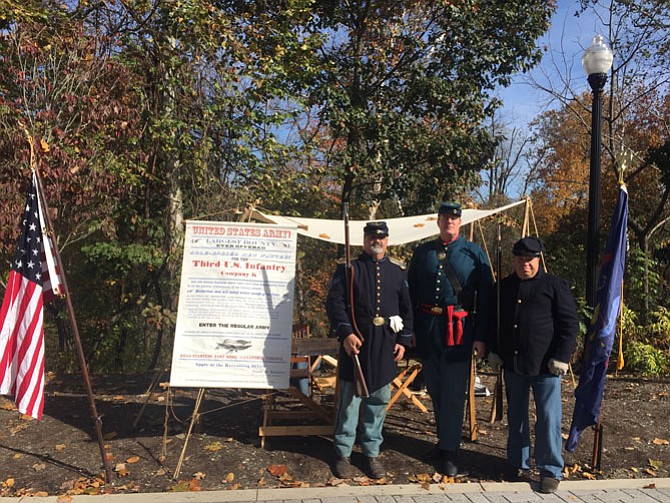 From left: Peter Vaselopulos, David Welker, and Chris Swanberg from the Army of the Potomac Living History Society. Photo by Vernon Miles. 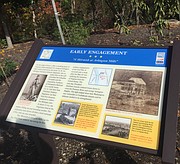 Overnight, Northern Virginia had suddenly become enemy territory. Less than one day after a vote in Virginia had ratified the state’s intention to secede, Union troops poured into Arlington and Alexandria to secure the region. A series of clashes rippled across the area, including one skirmish at Arlington Mills that resulted in one Union soldier killed. But while the two fatalities at the Marshall House in Alexandria and the battle of the Fairfax Court House have historic markers, the story of the Battle of Arlington Mills was largely unmarked until Nov. 11.

“It was a week after Virginia had seceded, so Lincoln was compelled to send U..S troops into [what was then called] Arlington Heights,” said Peter Vaselopulos from the Army of the Potomac Living History Society. “Arlington County was the epicenter of the Civil War at that point, the front lines one week in.”

It was more than a symbolic assertion of control, however. Arlington was a major transportation hub and would serve as a staging ground for future progress into the state. The Alexandria, Loudoun and Hampshire rail line, a predecessor to the Washington and Old Dominion Railroad, ran along Four Mile Run and was heavily used during the war. Arlington Mills was built at the intersection of the run and Columbia Pike, which Vaselopulos described as the I-66 of its day. Vaselopulos said at the time the mill, which burned down in the 1920s, was a local landmark.

A company of the 11th New York Infantry, the same unit whose Col. Elmer Ellsworth had been killed removing a confederate flag from the Marshall House, was posted to the mill to relieve a company from the 1st Michigan Infantry. At 11 p.m. on June 1, Virginia militiamen crept up towards the mill and opened fire. One Union soldier was wounded and Cornell was killed. The Union troops returned fire, wounding one Virginian, and driving the attackers away. The attack, along with other scattered skirmishes, were a prelude to the Battle of Bull Run a month later. Cornell and Ellsworth’s deaths were only the first tragedies for the unit. The 11th New York Infantry suffered extensive casualties at Bull Run and was disbanded afterwards.

“It’s the type of history people forget,” said Vaselopulos. “Many of the details came from diaries, giving us access to their stories.”

Vaselopulos said Arlington saw extensive limited engagements throughout the war, with another skirmish taking place in Bluemont. One of General Robert E. Lee’s first orders was to steal two of the three locomotives off the rail line in Arlington, completely removing them from the tracks and pulling them away with oxen.

Vaselopulos has been doing historical reenactments for five years and others at the unveiling said he was instrumental in getting the plaque established.

“Peter [Vaselopulos] was the driving force behind getting the skirmish recognized,” said David Farner. Farner credited Vaselopulos and the Civil War Trails Organization for doing the research and uncovering information about the Battle of Arlington Mills. Farner also said Del. Alfonso Lopez assisted with the project. The project was funded by Arlington County for $2,600 as part of the county’s efforts to do more Civil War interpretation.

“This was one of our major civil war events,” said Vihstadt. “Especially on Veteran’s Day, it’s important to remember this significant event in the nation’s history right here in Columbia Pike.”