Exploring the World of Power
Votes

Exploring the World of Power 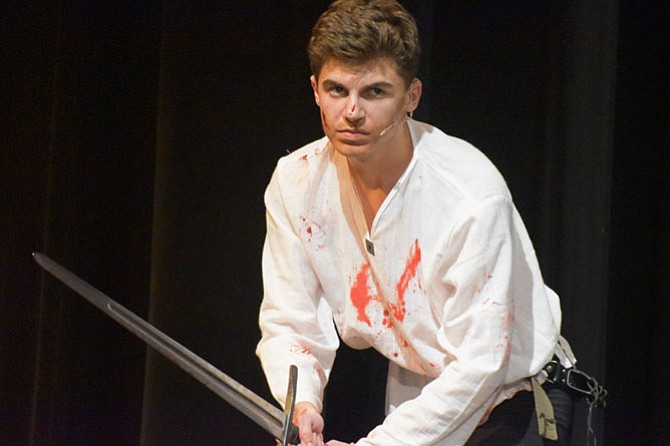 By By Keenan Parker, Madeira School

Vienna — Witches and battles and kings, oh my! Toil and trouble falls upon Scotland as Macbeth moves to take the throne, and promises death to all who get in his way. James Madison High School's production of “Macbeth” explores this world of power and influence, and the horrifying ways to gain it.

“Macbeth” is a tragedy by William Shakespeare thought to have been first performed in 1606. The story follows Macbeth, a politically ambitious and well liked man, and his journey to power, while descending into madness and gaining a thirst for blood along the way. Through the telling of Macbeth's suffering, Madison High School's cast eloquently preached the damaging physical, emotional, and mental effects of excessive ambition on those who seek power for their own benefit.

Macbeth, while having scattered dialogue scenes, is almost entirely composed of long monologues and frequent soliloquies, making it incredibly challenging to perform in the correct context and with the intended expression.

Madison's cast and crew handled this challenge with the poise of professionals, perfectly embodying and understanding the meaning behind Shakespeare's language. Along with the mastery of Macbeth's text, the cast also used impeccable diction and projection, the cherry on top of this immaculately performed Shakespeare play.

Max Jackson (Macbeth) gave an incredible performance, supporting a tremendous character progression from the easy, well-liked army general to the paranoid, blood-soaked king of Scotland, and carried the monologue heavy show with ease. Jackson's revealing soliloquies and intense interactions with other characters revealed the deep desires of Macbeth, and bettered the show as a whole.

As the plot progresses not only Macbeth's own greed and maliciousness increases, but that of his wife's too. Charlotte Reed (Lady Macbeth) conveyed this increase in darkness with vigor. Like Jackson, Reed supported an enormous character progression while maintaining solid and intensely revealing in soliloquies, maintaining the poise of a seasoned actress.

The Weird Sisters' (Claire Ashby, Alison Sciuto, and Hunter Slingbaum) stunning performance transported the audience into the horrifying world of Macbeth with haunting body language and strong acting that reflected the tones of the show.

Impressive light and sound cues, tech functioned as a well-oiled machine, helping develop the well-known characters and dark plot of the play.

From tech, to acting, to understanding of the text, James Madison High School excelled in their production of Macbeth. All aspects of the production worked together to convey the dangers of ambition, and to show Macbeth's evolution from lighthearted to dark because of it.